The Golden Age of Creative Distribution Is Upon Us 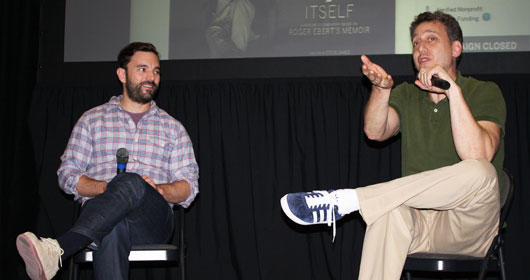 Chris Horton and John Sloss on the panel “Licensing and Distribution in the Modern Age.”

PJ Raval, director, Before You Know It

This weekend I attended the sixth Sundance #ArtistServices workshop in Austin, Texas, presented by the Austin Film Society. As a filmmaker who just spent this past year screening my feature documentary Before You Know It at festivals worldwide (SXSW world premiere in 2013) while also trying to navigate the ever-changing distribution landscape (my last film Trinidad was distributed in 2009) there was one panel in particular I was most anxious to attend: “Licensing and Distribution in the Modern Age” with John Sloss. Full disclosure, my film is a Sundance Institute Documentary Film Program alum, and I’ve been working very closely under the guidance of  #ArtistServices. My producing partners and I decided to take the increasingly popular route of carving out rights to multiple distributors, use crowdfunding to raise much needed funds for distribution (our film opens in NYC May 30th!), and never lose sight of our ultimate goal to get Before You Know It seen by as many viewers as possible despite any discouragement.

It’s true. Distribution is a hard road for any independent film and perhaps more so for a documentary – and even more so for one about gay seniors and the aging community. Despite these odds, we’ve been feeling good about our distribution strategy, and we continue to gear up for our May 30th theatrical release. However, one person speaking that day could potentially make me feel like I made all the wrong decisions – John Sloss. I assume for many of you reading this John Sloss needs no introduction. But for the few that do, John Sloss is a lawyer, an executive producer, founder of Cinetic Media and co-founder of FilmBuff, media maverick and “dealmaker.” To say Sloss is a film industry heavyweight would be an understatement. So sitting through a conversation about distribution moderated by #ArtistServices’ Chris Horton (also former assistant to Sloss at Cinetic) was truly an informative session. But a few key points in particular from the conversation struck close to home and are worth mentioning:

1. “The Great Sundance Moment” has passed and is never coming back.

Sloss and Horton reminisced about the 2006 Sundance Film Festival when a “little” film they were representing called Little Miss Sunshine sold within 24 hours of its world premiere, making one of the biggest sales in the history of the Festival to this day. As the two recounted a colorful story of a physical sacrifice for the sale (just ask Horton about an odd scar on his hand) it became clear they were speaking fondly of a fun and fleeting time. Not only are those days of feverish sales over, so are the dollar amounts. But it’s better to look back fondly than look forward disappointed. Times change and so does distribution. Takeaway: stories of big sales are just that – stories, and no longer a reality for most filmmakers.

2. Be an empowered filmmaker: realize you have distribution options.

Don’t place all your eggs in that one distributor basket because you might not get that “Great Sundance Moment.” In fact, it may be more ideal to work with multiple distributors and think more in terms of “creative distribution.” As Sloss argued, if distributors are making smaller dollar offers and asking for less ideal terms, what else are they bringing to the table, especially if your film is one of many titles they can push? Different distributors may have different strengths and interests, so working with each in their strongest area of expertise is only to your and your film’s advantage. Also, new programs like #ArtistServices give filmmakers the tools to question the role of the traditional distribution model by providing filmmakers with creative distribution opportunities. Takeaway: they need you, you no longer only need them.

Using Steve James’ Roger Ebert biography documentary Life Itself as an example, Sloss spoke about how James was able to raise over $150K with an IndieGoGo campaign and offer Ebert fans an opportunity to watch the film online simultaneous to the film’s world premiere at Sundance through a private stream link powered through VHX. James created a unique community-building event. Even though the film pre-sold streaming, Magnolia Pictures still took on theatrical distribution because the film already had an impressive 2,000+ active fans who felt invested and would ultimately help with word of mouth promotion. Takeaway: all filmmakers should consider crowdfunding and view it as a necessary marketing tool not just a 24/7 stress fest (which it definitely is!).

4. If John Sloss can’t get the numbers, how will filmmakers ever fully embrace day and date releases?

During the fall, Sloss called on independent distributors to begin reporting video on demand (VOD) grosses for films releasing simultaneously in theaters and on VOD platforms (“day and date” release) in what he calls “multi-screen gross statistics.” Much to his disappointment, distributors were unwilling to share any data, leaving filmmakers further discouraged from seeing day and date releases as a lucrative model, many of whom Sloss believes might actually do better if they took this option. Takeaway: demand full transparency from your distributors and take away the power of the need-to-know model. The worst thing they can say is “no” and the best thing they can say is “here’s the money!”

5. Change the game and find your own strategy.

Each film is unique, so each film distribution strategy should be equally unique. For every film that successfully did X, Y, and Z, another equally successful film did Y, Z, and X. With Twitter, YouTube and new social media tools popping up daily, we’re living in the “wild west” of distribution models. Filmmakers are being innovative and daring in getting films to audiences, and the concept of windowing is wide open for re-evaluation. As Sloss adamantly pointed out, “conventional wisdom needs to be thrown away.” What works for one film may not work for another. Takeaway: your film is a unique snowflake and so is your distribution model, so embrace the unique strategy before the opportunities melt away.

Overall, I walked away informed, assured, and relieved, not because I felt we’ve made all the right decisions, but because everyone seems to be in the same distribution boat and the waters are all being tested. Thank you, John Sloss for being the captain and making my day, I feel ready now more than ever. But then again, maybe get back to me on May 31st.

Watch the trailer for Before You Know It below and request a screening in your city!

Named one of Out Magazine’s “Out 100 2010” and Filmmaker Magazine’s “25 new faces of independent film 2006,” PJ Raval is an award-winning filmmaker whose credits include Trinidad (Showtime), the highly charged and not-safe-for-work Christeene video collection (SXSW), and Before You Know It, Raval’s latest feature documentary that opens in select cities May 30th. Also an award-winning cinematographer, Raval’s credits include the Academy Award-nominated documentary Trouble The Water and the Millennials comedy Love and Air Sex, directed by Bryan Poyser.