Q&A: Go Behind the Scenes at the Alamo Drafthouse with CEO Tim League 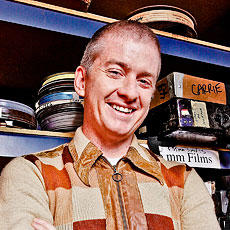 As part of our Creative Distribution Initiative, we tapped Alamo Drafthouse CEO Tim League to find out more about how the Austin-based movie theater chain does business. Keep reading for League’s thoughts on building his brand, finding new audiences, and branching out into partnering with Magnolia.

For you and for the Alamo, how does a film that does not have an all-rights-scale distribution model in place build out the booking process for screening in your theater?

In terms of the Alamo, we have a programming office out here in Austin. We receive submissions and the first thing we do is watch the films. The most important thing is that we readily see an audience, that there is an exploitable angle to the film. And if there is, then there is a good shot that there is a slot for it in our programming. Unfortunately, we don’t play a lot of independent film dramas that do not effectively find an audience. Often the film festival arena ends up being the best place to find an audience for those films.

Yeah, so has creating Fantastic Fest and other special events and programs acted as an answer to help connect your brand to the independent community?

Yeah, I think so; it definitely has played a lot of films that go through Fantastic Fest and get great audience response there. And we probably brought them back theatrically at the Alamo, whether they had formal distribution or not. The reason being that we believe there is a growing community around Fantastic Fest and those people help spread the word about those films that have an “exploitable angle.”

So aside from Fantastic Fest, how have other non-studio films found a slot in your theaters?

Sometimes it’s local filmmakers; in particular, local filmmakers who demonstrate that they understand how to develop a community around themselves. And so, for example, we have the Zellner brothers, who recognize that the strength of their brand is their personalities. So they are versed in social media and utilize the fact that they are a PR asset.

So if the Zellners want to show a collection of their shorts, we know that they will work hard and that they already have a fan base that will support their work as artists. So it is a really important factor, for those just starting out in the independent film scene, to recognize that you are a brand. And as crass as that may sound, it’s your responsibility to show exhibitors that you can help find and provide an audience for your work.

So what are the finances involved for someone like the Zellners who has brought a project like that?

It’s pretty simple; it’s usually going to be a percentage at the door. So if it does well, everybody does well.

Do you ever employ the model where you screen a film as a fee to the filmmaker to show in one of your theaters, say for a week?

The only thing we will do is if someone wants to do a screening, we will rent the theater for a low rate at peak box office hours. But we make it pretty clear that it is a rental and not a part of our programming. The problem you run into with a filmmaker renting to show a film for an extended period of time is that a film that plays in our theaters gets our programming seal of approval. And we try to keep consistent and loyal to our community that supports our programming. So if we are not curating the film, I think, the four-wall model is not the best choice in the long term for our brand.

Beyond the scope of traditional publicity and the redesign of your website, what are some particular ways you get the word out to the community about your programming and curation?

Well, in our programming department, we have about six people programming in the Austin market. And the way we message curation is that the audience knows who chose each film. So Henri Mazza, the head of the creative department, has really specific tastes, and he is building his own audience. And when Henry says “Hey, I’ve chosen this film and you should see it,” he is speaking to his audience who knows his taste.

And then we have two guys Zach and Lars, who have radically different tastes. And when they write a blog post or a summary about a film, it has their name after, which in turn speaks to their audience. They are on Facebook and Twitter maintaining a personal relationship with their audience, acting as an individual stamp of approval under the umbrella of the Alamo stamp of approval. This allows some people to listen only to one voice and some listen to it all.

I am going to shift gears here—when it comes to programming and selecting a film, do you guys have an official policy in regards to the date a film is released on premium or cable VOD?

It is really case by case. We have a pretty strong relationship with Magnolia and IFC, who are some of the innovators under the VOD space. Some people are up in arms over VOD, but I really don’t think it affects us that much. Magnolia, who’s really a pioneer in the Ultra VOD concept, understands that the most important thing in promoting a film is to expand the size of the megaphone early. The process of screenings, theaters, press, and pr is really all an effort to make people even moderately aware of your film if you don’t have $50 million to place in advertising.

So ultimately I look at Ultra VOD as a promotional tool. And we’ve shown we can still gross well after a film has been shown on VOD. But we don’t have a set policy on this. Viewership may drastically rise on VOD and drop off in theaters. I have no hard-and-fast statistics; it is more so based on gut feeling. So for now, we have no issue if a film is on VOD; as long as we think we can deliver an audience, we’ll give it a shot.

And Magnolia is in a partnership with Drafthouse Films; could you talk about the extent of that partnership and how that experience of distributing Four Lions was?

Four Lions was generally positive, and it was the first film we were involved with in distribution, so there was a fairly steep learning curve. So how that relationship worked with Magnolia is that we teamed up with the Drafthouse to craft the initial campaign for the film. We managed marketing, advertising, and theatrical release. And then DVD and VOD were handled through Magnolia channels.

And what did you learn from that experience?

My biggest takeaway was how damn expensive it was to open something in LA. We spent a lot and the return wasn’t great. So we lost a lot of money in LA, but we did get a lot of press out of it. LA is better looked at as a collection of neighborhoods rather than a cohesive city when it comes to releasing a film. We’re gonna handle that market differently on the next go around.

There was also a strange reliance on newspaper print advertising with certain theaters. New York was a great run that required daily prints. The exception was that it was the New York Times, which is a double-edged sword; although wildly expensive, it does provide international reach.

Speaking of Los Angeles, when is the Alamo coming out here?

I hope soon; we are actively looking, and as soon as we get something confirmed, we’ll announce it. I think that how we handle our promotions is exceptionally well suited to LA. The audience is there, it is THE film town. The types of films we deal with require nurturing and awareness building, a system that has been rebuilt at the Alamo in Austin.

So what does this next year hold in terms of branching out from your existing venues?

We are looking at a number of cities, but nothing is concrete yet. In the world of real estate, a lot can go awry. Until a lease is signed, walls are being furbished, and we have a project under construction, we’re really not going to say anything. That being said, we have made our desire to expand to LA and NY pretty clear, and there are a handful of franchised partners we are trying to help expand.