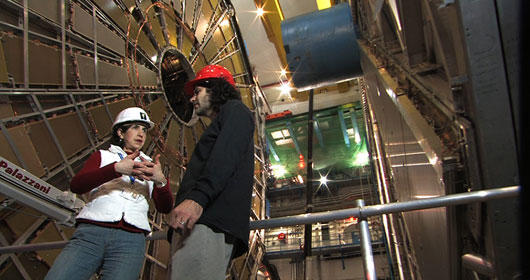 Particle Fever participated in IFP’s 2008 Spotlight on Documentaries at Independent Film Week and is released in-part through IFP’s collaboration and partnership with the  Sundance Institute #ArtistServices Initiative.

It’s hard to imagine a more imposing logline than the one depicting Particle Fever. While the film itself doesn’t endeavor to solve the mysteries of the universe, its subjects –a coterie of leading scientists – absolutely do. From that ambitious pursuit director Mark Levinson whittles a tantalizing verite thriller, presiding with a deft directing hand as the world’s greatest and most expensive experiment makes headway.

The cryptic “experiment” in question is one that even those with a casual interest in current events would recognize thanks to its sensational and distorted treatment by global news organizations: the discovery of “The God Particle.” In reality, it is a subatomic particle scientifically known as the Higgs boson, and the final piece of the puzzle in the Standard Model. In layman’s terms, the discovery of the Higgs could confirm all of our current understandings of the universe, while its absence would throw everything we thought we knew into question. But for either to happen, a contingent of the world’s brightest theorists and experimentalists must launch the Large Hadron Collider, a particle accelerator that will attempt to recreate the conditions immediately after the Big Bang.

Still with us? The brilliance of Particle Fever rests in its precision in explaining the scientific challenges at hand. Levinson plucks six fascinating scientist subjects to help guide along this mystifying narrative, and explores their cloistered world at CERN – the European research center where it all goes down. As of today, Particle Fever is available on a long list of VOD platforms. Watch on iTunes, and check out our recent conversation with director Mark Levinson below.

You have your PHD in physics from Cal Berkley, but up until now your filmmaking career meant that you mostly abandoned that passion. How did you come to Particle Fever?

I always hoped that there’d be some more direct connection between my past life and present. I also don’t think science is very well depicted [in film] – it’s mostly scientists running around in white coats. But I was a theorist in physics and dealt with the most abstract things. It was all abstract mathematics, and that was what excited me and still excites me. I always thought that I’d love to communicate to people just how amazing this field is, even though it can be very complex.

Then I heard about this documentary that particle physicist David Kaplan was trying to get made. I was invited to present a script I had written to a group of investors, and they told me about this physicist who had applied who wanted to make a documentary about an experiment that they didn’t know would work or not – they didn’t know if they would ever find anything. [David] had no film experience so [the investors] turned it down, but it did strike me as something that could reconnect things for me. I contacted him and told him I wasn’t interested in doing a typical science documentary, but if I could use the narrative storytelling skills that I had been developing, that would be very interesting. And he was all for that.

There’s a level of human depth that the film achieves, and it’s never didactic, never too convoluted, even for the science illiterate like myself.

The intention always was that the film would primarily feel like a narrative dramatic film and the science would be inserted as needed. The mantra was “just enough, just in time.” I had the great benefit of the great editor Walter Murch, who also comes from the fiction narrative world. As we were constructing Particle Fever, we initially had no science in it; we were just working on getting the dramatic structure down. Then we would go back and put the science where we need it to keep people going.

The other thing was that we had these little blog cameras, which you picked up on. I gave our characters these consumer HD cameras, and the idea originally was that this would be one thing they could use when I’m not there. Then they also became a way to explain some of the science facts later…in a way that again feels more like someone is talking to you in a personal way. It doesn’t feel like a lecture.

A challenge inherent to verite filmmaking is that the director is powerless over the narrative. This story obviously took plenty of dramatic turns—how did you manage to document everything?

That’s the challenge of any documentary. I did it by shooting over 500 hours of footage (laughs). It is tricky, and especially in a story that is evolving. My big challenge was knowing when to be somewhere, and knowing where to be and who to be following. Our team was always very small. It was usually just me, a cinematographer, and a sound person, but I ended up getting great allies at CERN, who have a very sophisticated media department. They have been filming since the ‘60s. They essentially became second and third units for me.

There is some great editing that contrasts the cloistered CERN world with the media coverage of the experiments. There are these paranoid rumors suggesting Armageddon, and references to the Higgs as the ‘God Particle.’

It is something that we were very conscious of and wanted to present. In some sense the film is about how science is seen by the public. Again, I think there are stereotypes about science and scientists and these sensational things, which from the scientist’s perspective are ridiculous, but from a filmmaking perspective are magical.

When I was filming, it was the height of this hysteria and that headline that you see in the film that asks, “Is the world going to disappear tomorrow?” Well I actually found that newspaper in a newsstand in Geneva. There was a lot of paranoia there. Physicists were getting death threats. The media office held a seminar on how to deal with the press. They definitely increased security. So what we wanted to do was present that it was there, that it was a circus, but also put it into the context of how the scientists see it. That this is ridiculous, and hopefully people see that.