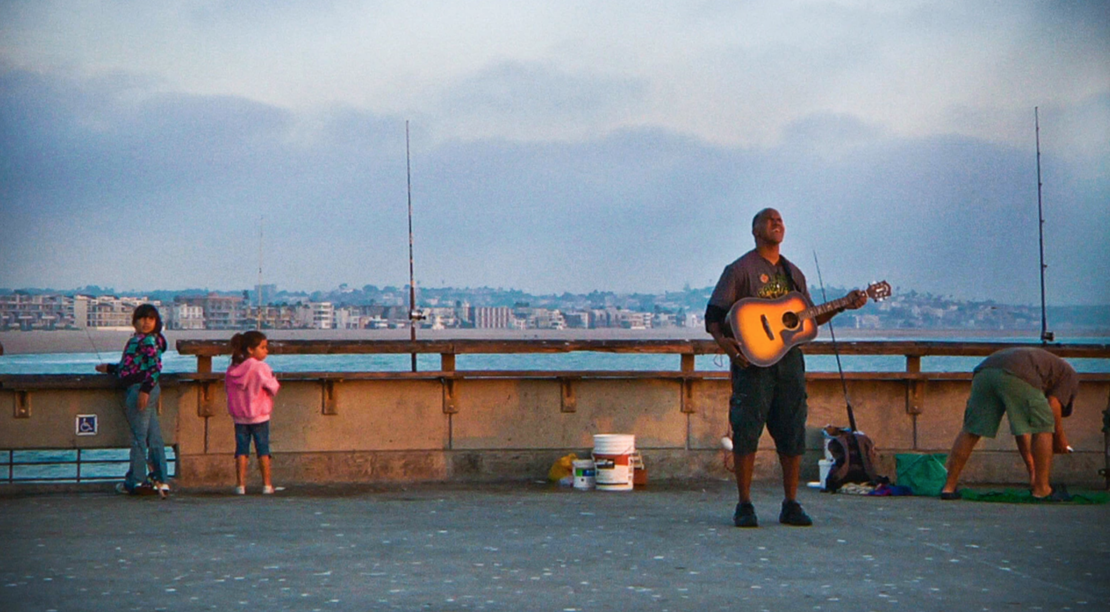 Jay Duplass attended the 2010 Sundance Film Festival with his feature Cyrus and participated as a panelist at last year’s ShortsLab: LA. Along with his brother Mark, he has previously screened features Baghead and The Puffy Chair at the Festival.

A few years ago, I was looking for inspiration, my college hero, Kevin Gant, came to mind, as he has again and again over the past 20 years. Kevin is a musician my brother Mark and I watched perform in Austin, Texas, in the early ’90s, and to this day, he remains the most inspired artist I’ve ever witnessed. So when Kevin disappeared back in 1995, it weighed on me. For years, I asked around but could never figure out why he’d gone away, or where to.

When I finally got serious in my search, all I could find online was an address on the east side of Austin. So on a break from my narrative work, I grabbed a camera, flew to Texas, and found Kevin. He was living alone, in a shabby apartment, spending most of his days in near-complete solitude. Here was the person who had inspired my entire creative career, and I realized that his own creative dream—to play and share in the joy of music—was long gone.

Here was the person who had inspired my entire creative career, and I realized that his own creative dream—to play and share in the joy of music—was long gone.

I asked him all the questions I’d carried around for years: “Where does your crazy, poetic spark come from?” and “What happened back in ’95?” What he shared was a very dark, very painful story. Riding the wave of his cult following in Austin, he’d decided it was time to move to Los Angeles to “make it.”

Mere months later, he was basically beaten to within inches of his life in what he later learned was a failed gang-initiation attempt. When I first interviewed him, both of his parents had recently passed away, so he was a single child with no family left. I got the sad impression that he was shutting his life down.

Flying home, I was at a loss. I wanted desperately to help Kevin, to re-inspire him the way he’d inspired me over many years. My first idea was to somehow reconnect him with the source of his inspiration, Spanish flamenco music, an obsession that goes all the way back to his childhood.

He owned a single cassette tape that he listened to constantly and fell asleep with every night. He felt a deep, mysterious, inexplicable connection to Spanish culture without ever having seen or experienced it firsthand. As he told me this, the thought flashed in my mind: “We have to go to Spain.” But immediately, my left-brain questioning started in: “How’s that going to happen?”

The very next week—randomly and cosmically, as things tend to go in Kevin’s life—I received an email from the Granada International Young Filmmakers Festival. Granada (how could it have happened any other way?) is literally the birthplace of flamenco. I called the festival and told them Kevin’s story, and they immediately agreed to fly him to Spain with me.

At the end of 2009, to the amazement of my left brain, we were traveling halfway around the globe together. I watched Kevin take in the sights and smells and sounds of southern Spain, with a peaceful, knowing smile on his face that lasted our whole trip. He was reconnecting with a place he’d never been but had somehow always known was home. That night in the hotel room, a song came to Kevin for the first time in over 13 years.

At our world premiere in March at the 2011 SXSW Film Festival in Austin, Kevin was there to play a live set for the surprised and emotional audience. There was palpable electricity in the room, and word has since spread to other fests, who are now requesting Kevin’s presence for the film and the performance experience. It’s been my lifelong dream to show Kevin to the world, and I’m incredibly proud to see it finally unfolding. In a twist I never expected, the festival tour for the movie Kevin is turning out be a global launching pad for Kevin the musician’s “comeback tour.”

If you’re interested in Kevin’s story, and would consider contributing to the travel expenses of Kevin’s tour (as well as the finishing of our film), please check out our fundraising page on Kickstarter here. We can use all the help we can get. Thanks so much!