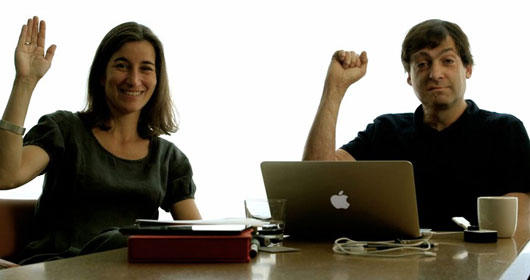 Yael Melamede is the director of (Dis)Honesty – The Truth About Lies and a co-founder of SALTY Features, an independent production company based in NYC whose goal is to create media that is entertaining and enhances the world.

I rode a NYC Citibike to a screening yesterday of Greg Barker’s We Are The Giant, a documentary that I had been looking forward to. When I got to the docking station to get rid of my bike, a guy was walking around, unable to take out a bike because his key wasn’t working.

I thought about it and then offered him my bicycle and asked whether I could take his picture. I told him that I’m working on a project about dishonesty, and that if he didn’t return the bike, I would post his picture online as a thief. If he did return the bike, I would have proof that one can trust people more often than one thinks. Such is the mindset of a filmmaker working with a behavioral economist – everything has become an experiment and a window into human ethics.

Dan Ariely and I embarked on this project a couple of years ago, in conjunction with the release of his third book, The Honest Truth About Dishonesty – How We Lie To Everyone, Especially Ourselves. Dan was interested in getting outside of academia and the lab and conducting interviews with people whose lies had seriously impacted their lives. We weren’t sure what we would do with the interviews – we thought they could lead to a TV series or videos that related to Dan’s book. It was an experiment.

The first weekend of filming had a profound impact on Dan, myself, and the entire filmmaking team. We found that the people we interviewed who had been the most “disgraced” turned out to be the most honest and open about their own mistakes. Their stories were also much more complicated and nuanced than we had expected.

We broadened the scope of our initial research to include spontaneous and informal interviews with everyday people whom we asked to share the truth about a lie they had told in their lives. The variety of the stories celebrates the randomness, the imagination, and the creativity of the human brain, and hints at the fact that the leap from small lies to larger lies is not as vast as we might think.

From the first day of filming, the project sparked intense conversation between the team members involved. What started as a “research project” became a constant catalyst for debate. I am drawn to material that sheds light on complicated issues through compelling human stories. By combining Dan’s scientific knowledge with the power of storytelling through film, we hope to explore the phenomenon of dishonesty with creative insights from two fields.

I came to filmmaking in a roundabout way after studying and working as an architect. After a decade building up our company, SALTY Features, I am stepping into the director’s role. And taking lessons from the last documentaries we’ve produced – Inocente, When I Walk, and Desert Runners – we are starting to build a community around this project from the outset.

We are also creating a website and a traveling installation – a video confessional booth called The Truth Box – so that the conversation about dishonesty can continue well beyond the film. We just launched a Kickstarter campaign for the film. Our goal is to raise enough money to finish the film, get it out into the world, and create a forum that encourages all of us to be more truthful in our lives. It’s a big experiment and I hope you will join us!