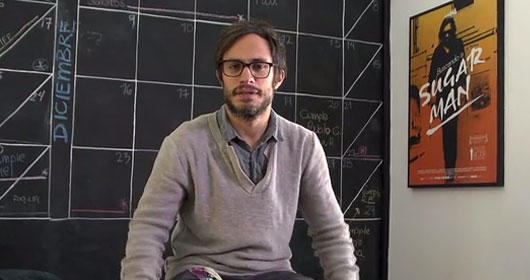 The goal is to “democratize documentary culture,” say Gael Garcia Bernal and Diego Luna, the artists behind Ambulante (whom you may recall from Y Tu Mama Tambien or Motorcycle Diaries), a traveling documentary film festival that embarks on a new journey for two weeks this fall.

The idea is fairly simple, and one adapted from a tried and true formula that has engendered nine consecutive years of sucessful tours across Mexico presenting international documentary cinema to areas with limited access to film. For two weeks beginning September 21, Ambulante will occupy the greater Los Angeles region to create unique exhibition spaces and program free documentary cinema.

But Ambulante’s ambitions in the U.S. can only be actualized with the public’s help. The team is in need of funding for necessities such as art projection equipment, transportation costs, and meals and gas mileage for a particularly ardent team of volunteers. To spur you into action, we recently chatted with Gael and Diego about their dedication to cultivating communities and the importance of public access to the arts.

Ambulante was conceived in 2005 and has made a successful run throughout Mexico. To date, do you have any favorite stories about the program?

What has happened with the Sonidero section (music documentaries) is amazing. Screening documentaries about music and famous bands in public parks and plazas all over the country created an impressive phenomenon. It initiated an opportunity for an encounter between a community who appreciates documentary cinema, and a public who had never been exposed to it. People from both groups were united in an experience very similar to that of a concert. It was a party in every sense, one that everyone was invited to attend.

Despite the proliferation of video on demand platforms, there remains an intangible quality to showing films in a communal way. Why is it important to screen films the way Ambulante does?

It is important to host free screenings because it creates the unique opportunity to connect with others and to be a part of a collective process of reflection. To foster community on all levels, and to feel part of something bigger than ourselves.

After such a success in Mexico, why is California the next frontier for Ambulante to explore?

There are an infinite number of topics and stories that are worth exploring on both sides of the border. We feel there is a need to forge a greater connection between the U.S and Latin America.

As both filmmakers and actors, largely within the narrative realm, how did you arrive at creating Ambulante?

Because we are members of the general public, and as an audience, we wanted these stories and these voices to find a an exhibition space in our country. This is how it all began.