How to Save Indie Distribution in 5 Easy Steps 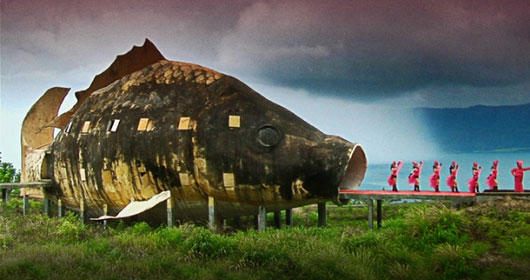 The Act of Killing

Straith Schreder is the Director of Content Strategy, BitTorrent, Inc., which has worked with Drafthouse Films on its BitTorrent Bundle, which Chief Content Officer Matt Mason spoke on at #ArtistServices San Francisco Workshop. Below, Schreder outlines the ways in which Drafthouse Films is an indicator of where independent distribution is headed and highlights five ways that Drafthouse Films gets the new distribution model right. This article was originally published on IndieWire.

2014 started with a referendum on the indie film industry. The New York Times called for an end to overproduction. Salon called independent film America’s next Wal-Mart. The problem with the movies in the digital age, we’re increasingly told, is that there are too many of them.

It sounds like the first-worldy-ist first world problem. But it’s real. Technology has made possible an era of unprecedented abundance when it comes to creative goods. 7,500 films were made last year. The average American will only ever see one hundred of them. And, only 10 of those will be indies. Will oversupply end independent film?

Well, it’s going change it. It’s basically inevitable that movie distribution in the post-digital age will look different. It’s possible that it might look something like Drafthouse Films.

Alamo Drafthouse started out in Austin: a single theater, reclaimed. It has since grown up and grown into 19 theaters across the U.S. And it’s also morphed into something wholly different: a predictor, maybe, of what’s to come in indie. From a single cinema storefront, to a cross-country chain, to a distributor: Drafthouse is now home to a catalogue of titles that together make up some of film’s most challenging works. Drafthouse isn’t just surviving digital upheaval. They’re thriving.

How do they make it work? It comes down to five basic (or not-so-basic) things:

There’s a common complaint about Hollywood in the Internet age: studios should be more like startups. It’s a good point, when it comes to marketing. It’s a bad analogy when it comes to branding. Because you don’t have a single product to sell. You have a catalog.

The better model is outside tech. It’s actually in the music industry. Independent record labels are remarkable at creating  specificity and difference around a catalog. Think Stones Throw or Sub Pop.

•    They’re anchored in a city; a scene.
•    We feel like we know their staff.
•    We can kinda picture their art; their offices.
•    Each project sounds different, but shares a sensibility

A label’s curation isn’t algorithmic. It’s obvious and human. Because it is, each release functions as an ad for the next. Which is an idea worth stealing.

The success of a catalog is closely tied to audience understanding. Drafthouse, as a distributor, isn’t made for a demo; males 18-54, or whatever. It’s made for a behavior-set: a small tribe of cinephiles and creatively obsessed.

•    It allows them to circumvent big media investments — they don’t need to carpet-bomb to connect. They can actually find these people on and offline.
•    It gives them an advocacy network. They don’t need to be upsold. And they have an outsize influence on the conversations that will impact Drafthouse’s current and future film catalog.

In Drafthouse’s case, the audience is ID’d before production begins. Then, they become part of the it–engaged from before the first day of shooting. For a film that doesn’t have a big marketing budget, the goal is to make potential fans feel like stakeholders. They watch the story unfold before it hits the screen.

3. Give your film context.

A film is a perfect, contained universe. And it’s more: a life’s work, compressed down into under two hours; the start of ten or ten thousand conversations. The stuff that’s bigger than what we see on screen: it already exists. You’ve shot and logged it. You have your campaign. In a world where emotion and in-the-know-ness drive content vitality, context is advertising.

It’s also good business. It doesn’t require a significant investment to develop. And it has real value. A recent study by VHX indicated that bonus content packages drive 42% of revenue for digitally distributed films.

Drafthouse relied on a context-as-advertising strategy to drive awareness for 2013’s The Act of Killing, making the film’s research, interviews, and media coverage available to all using BitTorrent. They reached more than 3.5 million people. They spent $0 on creative and media for the campaign.

4. Find the communities where access to the film has the most impact.

Drafthouse started out a single theater. Which is a singular way to start. It’s also a point of inspiration. Because super-targeted, micro-distribution is part of what made their 2013 campaign for The Act of Killing so effective.

The film was made available for free in the country impacted by its subject matter: Indonesia. Making it accessible there sparked conversations about the film here — driving up digital sales in Western markets.

5. Build a distribution model that amplifies the story behind the film.

The best part about the shifting distribution landscape is its flexibility. You can choose your own digital theater. You can build your own screen. You can customize it for each viewer. Part of Drafthouse’s success can be tied to a distribution approach that’s linked to each film’s overall story. Within this model, the screen becomes the message: a way of driving and reinforcing understanding.