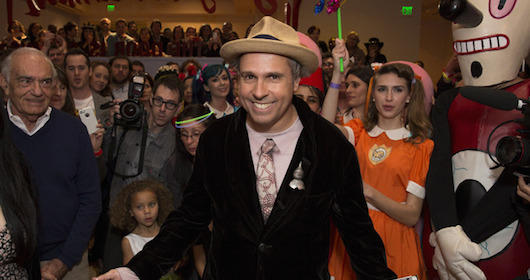 David Charles is a filmmaker, writer, and graphic novelist who has written and directed interactive and non-traditional storytelling experiences for bands, brands, and properties worldwide, including James Cameron’s Avatar. In 2011, Charles became the creative partner of renowned contemporary artist Gary Baseman. The pair are currently in development on their first live action feature film Mythical Creatures, which was supported at the 2013 Sundance Institute New Frontier Story Lab, and recently released a short animation commissioned by the Museum of Contemporary Art in Los Angeles. We spoke with Charles about the disturbing truths explored in Mythical Creatures, which he is funding through Kickstarter.

The film explores Baseman’s personal historical journey to the Ukraine during which he will build a monument paying tribute to Holocaust survivors. Part Pixar, part History Channel, Baseman travels to the Ukraine to unearth stories about the Holocaust, beginning with the secrets discovered about his own family’s history in Mythical Creatures, the imaginative new documentary film written and directed by David Charles.

I really believe that the stories we tell are the one’s closest to our hearts.

Gary Baseman and I have been writing partners for the past 3 years on a series of different projects. And about 2 years ago, after his father passed, he discovered in a rare book a heroic story about his dad during the Holocaust. This story forever changed Gary’s life and art. That story, combined with the loss of both his parents, gave him a purpose to keep their memories alive and share them with the world through his art. I lost my mother exactly 10 years ago. She was my best friend and an extraordinary human being and the way I found I was able to cope with such a loss was by furthering her teachings, values, and memories through my actions. So as I mentioned above, the essence of this film is something that pulses at large in my aorta.

That was the start. As the project grew larger and New Frontier Senior Manager Kamal Sinclair was generous enough to invite us to be part of the Sundance Institute New Frontier Story Lab, this very personal journey shaped up to be something way more important than we had first imagined. The film now has the ambition of using Baseman’s father’s story as a jumping point to bring the values and the stories of the holocaust to an entirely new generation – connecting the truth through art, animation, and innovative storytelling platforms. Whereas the feature documentary of the project will be “the hub” followed by several cross-media, educational, and real world ramifications.

It’s a complex project taking into account the plethora of mediums and how to bridge them seamlessly. That said, we’ve carefully assembled our team to live up to our ambitions and expectations. Our producer Lanette Phillips is a powerhouse. She has experience working in documentary, music video, and commercial worlds. Since our project has such a hybrid nature, it was important to have someone with such a diverse experience helping us make it happen. Executive Producer Eric Barrett was fundamental in getting this project off the ground. Our two-time Sundance Grand Jury Prize-winning DP Vasco Nunes is one of the most soulful cinematographers I know and he has the perfect sensibility to capture the film that’s in my head, and he’s been a huge collaborator overall. Michael Pearce and Francis Pollara, our co-producers, offer a mix of seasoned line production power with new school social media thinking, which is essential. Peter Markowski is our animation director and I can’t express how much his talent has helped our stories shine through so far. Scott Hathwick as our sound fdf has been essential to make all the music so far co-exist harmoniously; from Die Antwoord to Nightmare and the Cat and many other special guests on the way. On the research end, documentary filmmaker extraordinaire, Jon Kean (Swimming in Auschwitz) is helping to guide me and Baseman through the more academic side of what happened in the Ukraine during WW2, the truth behind the myths and how it draws a parallel with the contemporary issues that country faces today.

Some other crucial team members have been Sundance Institute’s Michelle Satter, Kamal Sinclair, Kristin Feely, Shira Rockowitz, and Missy Laney helping us in every way possible. I consider them are our fairy godmother’s in so many ways. And last but not least, the LA Museum of the Holocaust, who is our fiscal sponsor and has been greatly supportive.

This film has a universal message told by a very personal journey for Baseman and the team. That’s why we decided to get support from the kickstarter community, so we can go to the Ukraine and spend 10-15 days shooting, completely free of any studio or production tie-ins. We will embark on an exciting journey to one of the world’s most dangerous countries and go go deep into the Western Ukraine underbelly to discover new stories and myths and finally build a giant monument in honor of those who lived there. This trip will provide the spine of the film and it’s critical to the story we shot so far. Traveling and shooting with a team in the Ukraine is not easy. The longer we can be there, the more stories we can communicate back to the community. And for that we will be deeply grateful for everyone’s help. So please support us.