Crowdfunding and Its Hybrids are Worth It 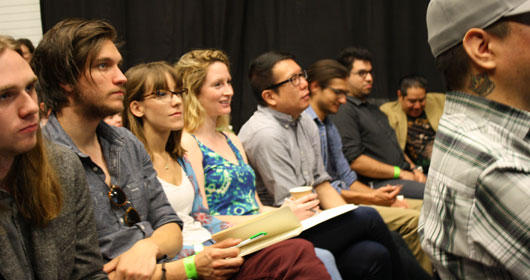 Camille Scioli Chambers is an independent producer, production coordinator and all around creative resources maven from Austin, Texas, who probably sat too close to the TV as a child. She has “multiple projects in various stages of development” but her favorites are as co-producer with Peter Atherton of The Iron Orchard, to be directed by Ty Roberts and working with the team of The Big Spoon, to be directed by Carlyn Hudson. She is active on the Development Committee of the Austin Film Society and is a past board member of the Texas Motion Picture Alliance and Women in Film, Dallas.

As I approach the Soundcheck Building at Austin Studios to attend the Sundance Institute #ArtistServices Workshop, I’m happy I moved here two years ago to be closer to the resources I need, to do what I have to do. After all, any independent filmmakers I know have to. We can’t not.  It’s in our DNA to keep on doing whatever it takes to tell our stories; begging, selling, learning, doing, making the next one and the next…

Sundance. In Austin. Cool. Thanks to the stellar Austin Film Society who invited #ArtistServices, this is no ordinary (yawn) panel discussion or obligatory film festival “seminar.” This room on this day is populated with the folks who are in the throes of “getting it done.” Names you see in the news, receiving awards, on the marquees and in the film festival programs. And that’s the attendees I’m talking about! We all have more to learn. So, lucky me!

The roundtable discussion on “Soft Money, Equity, and Crowdfunding (2nd Edition)” is at once enlightening (yay funding!) and disturbing (taxes, paperwork, reporting and regulations) and one thing is certain: crowdfunding is not going away for a long time. So I ask myself, why have I been so reluctant to jump on the bandwagon even after a film I’m helping produce, The Big Spoon, just raised $35,000 on Kickstarter (thanks to the hard work of Producer Melissa Dalley), but more on that later.

Indigogo’s Shannon Swallow, director and DP Evan Glodell (Bellflower), Entertainment Attorney Deena Kalai, and Tax Law Expert Cameron Keng enlighten and inspire with what is new, now, and next in the world of hybrid and standard crowdfunding for films.

Shannon Swallow shared that since its launch in 2008 at the Sundance Film Festival, Indiegogo has seen their film vertical grow exponentially. The flexible funding model used at Indidgogo allows you to keep whatever money you take in regardless if your funding goal is reached or not. Extremely user-friendly!

Director Evan Glodell believes crowdfunding “is the most significant and important thing to happen to money for films” and he would definitely do it again. “It can be scary because you put yourself out there publicly with the possibility of failure,” said Glodell. “But it is like magic.” He raised $130,000, which was about 50% of their budget, but more significantly stated that the success of the campaign brought the notoriety and support that caused the very people who refused to invest early on, to come back to him and want in, veritably doubling his budget. What can be better than that? Money to make it, a built in audience awaiting the completion of the film, and on to the next one.

But it’s not that simple. “Someone talked to someone and said they had it figured out,” he said when asked about the taxes and reporting. Good for him.  It is important to understand that all crowdfunding monies are considered taxable income in the year they are acquired, and all tangible rewards given are required to charge sales tax. Hiring an accountant and budgeting for the fees and rewards is crucial to the success of any campaign. Cameron said “the review and audit is cause for a good accountant.” He also said informational reporting can cost more than filing a tax return for CPA needs. Get ready for lots of paperwork.

The beauty of Kickstarter and the original reason for its very existence, by my understanding, was to fund cool stuff that may not otherwise get money. And let’s face it, films are cool. I’m thinking the best way is to just get gift money outright, and tax lawyer Cameron Keng agrees, but that is easier said than done. That would mean that a donor would be anonymous and receive nothing in return for her donation. Not even a ‘thank you’ recognition in the film credits is allowed. Well, there goes the cool factor.  According to Cameron, “the most success is when a film reward offers some level of interaction, not a t-shirt. You don’t have to give away tangible rewards, plus t-shirts are taxable.” Set visits, screenings, something intangible is ideal, he says. People decide to fund for so many different reasons, but they all want the project to succeed.

The good news for Indiegogo users is that their structure regarding tax filing only requires a 1099k when two things have happened: when a campaign has reached $20,000 and has executed 200 transactions. I’m thinking I sure could use $20,000 for my films right now. Some argue that crowdfunding is more about marketing than raising money. Evan Glodell won on both counts!

From outright gifts and funding for “rewards,” it seems inevitable that crowdfunding is moving into equity investing. Swallow says new legislation such as the Jobs Act has made this possible and is being fine-tuned with the SEC and hearings in the House Financial Services Committee. “The intent is to put more power in the hands of the platforms and consumer.” The website Slated.com is set up for equity investors and is free. Slated is a great site to reach pre-vetted investors if a filmmaker is willing to give up some equity. Kickstarter has announced that they will not include equity funding in their model.

Kalai believes if a filmmaker chooses online equity crowdfunding, it is best to stick to domestic investors, as foreign investors cause a whole new slew of rules, disclosures, and regulations. Filmmakers need to be aware that these must be included in their offering documents if they choose to accept foreign equity. All the panelists agreed that until the regulations are finalized, equity crowdfunding is going to have to endure some growing pains, however, it should be noted that standard crowdfunding is a great instrument to yield equity investors outright, creating a hybrid financing. Investors may be enticed to match funds raised online and according to Shannon Swallow, even some venture capital firms are seeing this as a plus since backers will help the film succeed and support its release starting with a built-in audience. Risk is mitigated when equity investors add to the crowdfunds. Big studios that refuse to take a risk on a genre film will miss out, while the crowds fund, promote, and watch the films they supported since the beginning. Swallow says setting an easily attainable goal will gain success and show your equity investors, distributors, banks, and other sources the potential for your film with a market built in. With more backers, a project also achieves proof of concept and market validation, which helps with distribution and investors. It gets people to engage with your film before you even begin it.

So I’m Not the Only One who Feels This Way

I must admit, I have been extremely reluctant to get on board the crowdfunding bandwagon, for reasons that are hard to explain, and then in the afternoon, John Sloss, the brilliant entertainment attorney and founder of Cinetic Media tells the story of one of his most famous and prolific clients. Sloss said he approached this particular director with the idea of crowdfunding the sequel to a sequel with a loyal, almost cult-like following of this filmmaker’s low-budget, quirky films. The director refused to do it, because he is uncomfortable with how it feels like “charity.”

I feel (felt) the same way! I have donated to several crowdfunding campaigns but felt uncomfortable doing one for myself. I have also been completely irritated by pleas like “Even $10 helps!” and then the next and probably previous Facebook postings are their trips to Europe, Vail, Africa, Coachella, an exotic beach, etc. Basically anywhere I’m not because I’m working on getting films funded. You are begging me for $10 to make your film and yet you still have $ for a vacation? What am I missing here? Obviously a lot.

Sloss says he could not convince his client to bypass the big studio and take the project directly to his fans and that he (and I) was missing the point and that even he used to think it was a vanity ploy. Now, he says, and even tweets “it’s more about community building than funding your film.” It helps filmmakers to no longer be at the mercy of a distribution deal who have a specific project for a specific audience. It’s the Wild West.

I think Kickstarter’s rule of “meet your goal or get nothing” is a helpful and motivational challenge.  It sure was for The Big Spoon. Melissa and her team worked intently and frantically for a month and are still hard at work fulfilling some of the coolest perks and rewards ever promised on Kickstarter, I’m sure. The campaign exceeded the $35,000 goal, gained a ton of fans and supporters, won IndieWire Project of the week, and got mentioned in a Huffington Post article. Meanwhile, I am the biggest convert to crowdfunding ever, e-blasting the hell out of the month-long campaign, surely driving all my friends and colleagues nuts with bragging, pleas for more and urging them to give, Give! Even $20. And they did.

I can’t wait to reward each and every donor with a hug at the premiere. Tax-free of course.