Well that was fast! The holidays have come and gone and Christmas, Again has essentially “expired” (until next year at least). Had it not been a “Christmas movie,” the film would be 5 weeks into its release, slowly building word-of-mouth as it makes its way around the country in and out of theaters and living rooms. Instead, we had a very compressed window (3 weeks!) and hit it with everything we had.

In the first post I explored our individualized release strategy and the different resources at hand. I’d like to focus on two of them here: 1. Marketing / promotion, and 2. The Quiver platform.

It’s no secret that in micro-budget film everyone wears lots of “hats.” This hat-wearing, and the DIY ethos it operates within, is a key component to the one aspect of a film no amount of money can buy: the soul. And being that the foundation for both the tree stand and the film was community, it was important for me to focus attention on the community around the tree stand (Greenpoint, Brooklyn) and to do so in a very genuine manner.

To advertise the film at the tree stand we created a vinyl banner of our poster in which I punched holes around the edges and threaded through a strand of Christmas lights. We attached a smaller sign with specific info (MoMA, VOD, etc) and a pouch containing business cards with more info that included a Vimeo discount download code. I found the business cards to be significantly better for handing out than the typical movie postcard (also a lot cheaper). We went through over 200 cards at the stand alone.

My staff at McGolrick Trees mentioned the film as much as possible and they found that most people had already heard of it, if only vaguely. After the first week of selling trees we started getting a lot of people coming by asking about the film (with no initial intention of buying a tree). The tree stand boosted the film’s business, and the film boosted the tree stand’s business (we sold a record number of trees). Besides having the business cards at the stand, I also attached them to tea-flowers (a key prop from the film) that we mailed to theaters to give out. I bulk ordered the tea-flowers (about 250), bought some cheap “favor bags” and used twine to attach the cards. We put them in inexpensive holiday baskets and shipped them to theaters (the basket in LA was empty by the end of opening weekend). For those unsure of what to do with the tea-flowers, the back of the card told them to visit the film’s website for instructions.

The tea-flowers were a big hit at both the Laemmle in LA and the Gene Siskel in Chicago, but the bigger question remains: were they effective? It’s really impossible to tell.

In LA we had to four-wall our theater and the attendance was lackluster, which means we lost a significant amount of money. Opening weekend was very cold for LA standards (40’s at night) and my LA friend semi-jokingly replied, “People don’t travel far in LA when it’s cold.” It also turned out that our biggest competition wasn’t the Oscar-buzz December openings I was fearing; it was holiday parties. There are only a handful of Fridays & Saturdays in December and I was quickly reminded how precious those weekends are for people.

Besides a very strong Los Angeles Times review, our LA press was minimal. In hindsight, is there anything I would have changed about our LA release? Probably not. I also think that the same reasons that might have kept audiences away from the theater that week may have led them to rent it at home, as our digital numbers were very strong.

In Chicago our attendance was slightly better. On Saturday I did a Q&A hosted by Joe Swanberg, which drew a very solid crowd, and I heard from the theater staff that the Gene Siskel gets a lot of “regulars” which I think helped with our run. The press in Chicago was modest at best.

The biggest reason LA and Chicago were such a shock to me was that our New York opening was so strong. We sold out several of our MoMA screenings, garnered fantastic press (Wall Street Journal, New York Times, Leonard Lopate, etc.), and the overall buzz around the film was high. Perhaps I thought that other cities would be looking more towards New York and following suit.

After our MoMA run had ended we held a neighborhood screening at an old Church in Greenpoint, about 100 meters from the stand. In true DIY fashion we brought in a projector, a donated screen, and I borrowed a friend’s PA system for the audio. We advertised the screening locally and had a considerable turnout. We offered cookies and hot chocolate and held a Q&A with Kentucker Audley and some other cast and crew before all heading over to the tree stand.

All in all our grassroots marketing was perfectly in line with the ethos of the film from the beginning — an individualized production and an individualized marketing campaign. Our neighborhood appreciated that and they supported the film when we needed them. The Made in NY Marketing Credit was also a great success — and although the ads didn’t start until the second half of December, they exposed hundreds of thousands of New Yorkers to the film and it didn’t cost us a dime. 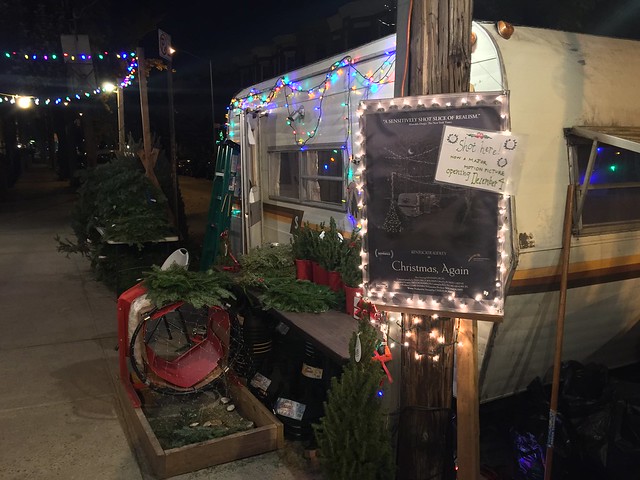 First off, let me admit that I’m a statistics nut. In high school AP statistics was the only AP class I scored well in (don’t even ask me how I did on AP German). My love of stats notwithstanding, Quiver is a fantastic step forward for filmmakers trying to analyze and understand VOD performance.

A significant caveat before I begin: Amazon and VUDU stats have yet to be sent to Quiver, so my information thus far is based on the film’s performance only on iTunes, Google Play, Vimeo and Fandor. I don’t expect the Vudu stats to be very significant but the Amazon ones could be, especially since the Fire Stick seems to have taken the lead among inexpensive streaming devices. Additionally, I’m going to exclude Fandor for the sake of this analysis, and focus only on transactional VOD (TVOD).

As you can see from the chart above, iTunes sales were extremely high opening weekend — 42% of all iTunes orders came opening weekend — with small peaks the next two weekends and surrounding Christmas. To illustrate how the film “expired” on Christmas, iTunes sales after Dec 25th dropped 90%. How popular are iTunes rentals you wonder? Amazon and Vudu excluded, Vimeo and Google Play accounted for only 5% of our digital TVOD sales.

There were a few stats that stuck out to me, and here’s how I interpreted them:

A significant amount of people value price over image quality.
33% of our iTunes orders were SD

Consumers see value in cloud-based libraries.
12% of our iTunes orders were purchases (vs. rentals)

Chromecast seems to be more popular in Canada than the US.
15% of our Google Play orders came from Canada (vs 5% of iTunes)

One thing I learned in this process was just how different people’s viewing habits are. Everyone I talked to seemed to have a different preference for home-viewing (although AppleTV/iTunes still seems to be the most popular). I spoke with people who use Chromecast, Amazon Fire, Playstation, Fandor, and even torrent sites (the film has 38 seeders on Piratebay!). We had hoped the business cards would boost traffic to Vimeo, but only 2 people used the 25% promo code. Even still, it’s impossible to track how effective the cards were in getting people to other platforms.

Without the Amazon stats there’s only so much that can be concluded at this point, but the transparency of these figures, as accessed through Quiver’s easy-to-use platform, demonstrates the potential value of understanding audience’s viewing habits, which is an empowering thing for both filmmakers and distributors.

If you missed Christmas, Again you can see it on iTunes, Vimeo, Fandor and other VOD outlets. Next month, Factory25’s Matt Grady and I will take a final look at the release and break everything down with the benefit of hindsight.