On The Road with Range Life Entertainment 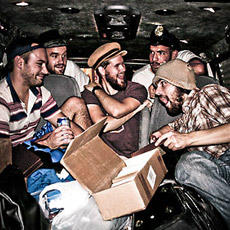 Todd Sklar loves coffee. In early 2008, he founded Range Life Entertainment, a privately-held film exhibition and marketing company, which tours independent films across the country on a bi-annual basis. Focusing on event-based screenings and niche marketing, Range Life currently programs over 120 events per year, while also producing original content, and continuing to parade dive bars and karaoke rooms across the U.S.

We had very little money and no experience and still managed to get roughly 50,000 people to watch a movie that none of them had heard of prior to us arriving, and provided them with an experience that got most of them to become dedicated fans.

The first ever Range Life Entertainment touring movie roadshow was the result of many factors, the two most important being:

The movie itself was small and focused enough, that it didn’t necessitate a more traditional release, and thus, we felt that we could probably do a better job of getting it to it’s audience than a distributor — which is no sleight against distributors. We work with plenty of them these days, and they all know what they’re doing. That said, they have very limited ways of doing what they do, and if you have a small film, and in specific, a small film that you believe in, you’re not gonna find a release plan that fits all your films strengths unless you develop it yourself. That’s a lot of work, and different for every film. There’s no one-size-fits-all-solution, so it’s really up to you to come with the best ideas for how to get your film out there if you do it the way we did.

Our idea with this one was to book it at universities and nearby independent art-house theaters across the country for single night engagements.  We felt we could only pack a house for one night only given our limited resources.  We’d hop in a van and bring a bunch of dudes to spread the word in person and online to hopefully excite a bunch of college kids enough to come check it out. After the screening, we party with them and make sure that all they’re talking about for the next week is either how good our movie was, how much fun of an experience the night was, or how much puke my partner Rennie got on their carpet (unfortunately true).

Either way, the concept of taking the film directly to the core-audience was at the heart of the entire process, and that’s pretty much remained the idea behind everything we’ve done since.  But before we get into any of that, let’s shed some more light on the fundamental process of a DIY Tour.

We had the first third of our screenings locked in before the tour kicked off on March 7th 2008, but the last ones were still being negotiated and we had to finish booking them as we went along … on the road.

There were a few factors at play – one of the largest being what we were doing wasn’t all that common in early 2008.  It took a lot of extra convincing to get theater owners and schools to believe that playing our film was a good idea.  We attempted to soften concerns by assuring them that despite the fact that even though we had no intention of doing any traditional marketing or ad-buys or press (we didn’t even have a publicist), we did have an awesome marketing plan.

It involved strategic Facebook marketing (which hardly anyone was doing at the time), cool live campus events (that sounded more like Jackass episodes than educational), and intense street team marketing (which hadn’t been effective since the 70’s in the eyes of most theatre owners). We had our work cut out for us.

The good news was, our plan was working, and by consistently selling out screenings for the first three weeks of the tour, we were able to gain access to a lot of theaters and colleges that had previously been cold to the idea of working with us. This led to our two big discoveries:

Since the entire touring mechanism is essentially a moving puzzle where every aspect is dependent and contingent upon the other, we had to keep to a very specific route and itinerary, which in effect was only valuable if every step leading up a given city was completed.

For instance, if you have eighty-five things you need to do before you can have a successful screening in, say, Tallahassee on a Sunday (and three days out you’ve only got seventy of ’em done, you might as well drive straight thru to Gainesville because Tallahassee is already a loss, and the only way you have a shot at catching up and saving the next city is if you move on.

When we hit the road, we literally had five* dudes (*technically, there were six of us, but one guy literally did nothing but get obnoxiously drunk every night, yell about how much better live-jazz in his Texas hometown was).  Five Dudes doing all of the work that needed to be done, including, but not limited to; booking screenings, securing lodging, negotiating food deals, building and managing our marketing plan, setting up all of our campus events and after-parties, and executing all that while spending 80% of every third day on the road with limited cell and Internet service.  (One Pro-Tip: without the use of illegal iPhone tethering to our computers, we literally would not be writing this blog post because we would not have been able to accomplish anything in the pre-3G Internet-Everywhere era).

Needless to say, there was a lot of trial and error, and a lot of coffee and chewing tobacco – so take that into account when plotting our your own road excursions.

Things we did great:

Our marketing tactics were very genuine and all tied into the film, which proved very successful.  We built our marketing plan prior to shooting the film and had the broad-strokes worked out before wrapping production.  We connected with our target audience in every city and built a huge cult following for the film across the country.  We had very little money and no experience and still managed to get roughly 50,000 people to watch a movie that none of them had heard of prior to us arriving, and provided them with an experience that got most of them to become dedicated fans.

Things we did not-so-great:

Plan for the worst, hope for the best.  Be as prepared as possible for anything-and-everything to go wrong. However, don’t ignore planning for the best.  As we found out, when things go right it presents a whole new host of problems and opportunities; the former requiring time that’s already been allotted to other things, and the latter requiring both the time, money and ability to take advantage of. And I would be lying if I didn’t say that a good amount of the value we built for our film on that first tour was lost because we weren’t able to capitalize on them.

Without getting into specifics, I’ll just say that if you had to run a marathon, you’d be better off running at a steady pace for the entire time, rather than sprint to a win.  Especially if you didn’t know what’s waiting for on you the other side of the finish line. It could be a victory cake, or it could be the opportunity to run another marathon.  You just won’t know.

Ancillaries. Because we didn’t premiere at a major festival, we didn’t have a sales agent, and thus never had the chance to secure ancillary deals ahead of time.  Since the only way to see the film or get a copy of it was to buy it through us, we had a lot of word-of-mouth buzz that went wasted as you couldn’t find a copy of the film if you missed the screening. We had that info on our website, but very few people buy movies off the filmmaker’s websites. It’s like going to Toyota’s website to buy a car. You just don’t do that. You go there for information about the car your thinking about checking out, but when it’s time to purchase, you go to a dealership. I can’t stress enough how important it is to get your film on as many “dealership lots” as possible prior to, or at the very least, immediately after, launching your theatrical.

The Bad and the Ugly (listed in order of memory and importance):