There’s something almost therapeutic about Morris From America. It would be remiss to owe the film’s charming qualities to its pastoral German landscape, so we’ll just tip our hat to writer and director Chad Hartigan for an unfamiliar coming-of-age narrative, one that confronts race while providing a respite from violence (and no surprise that he must take us to Europe to do so).

At the 2016 Sundance Film Festival Morris From America quickly became known as the attractive vehicle for one of this year’s most salient breakout actors in Markees Christmas, who plays the aspirational rapping teen ‘Morris.’ After moving to Heidelberg, Germany, with his father ‘Curtis’ (a heartwarming but not syrupy turn from Craig Robinson), Morris falls for a beguiling older girl named Katrin. While his pursuit is wobbly at best, the newfound relationship takes our hip-hop prodigy on a journey that pays dividends in life lessons and love, even if it doesn’t end with getting the girl. We chatted separately with Markees and Craig about their uncanny father-son dynamic in Morris From America, which screens at Sundance NEXT FEST Saturday, August 13. The Los Angeles premiere precedes a youth talent show hosted by Craig Robinson. Get tickets here.

Take me back to the initial stages of connecting with Chad Hartigan for the film and your approach to the audition process?

Markees Christmas: I wasn’t even thinking about acting. As far as getting the script, I just read it a bunch of times. I read it like six times at home and I kept reading it while we were shooting the movie.

Craig Robinson’s pedigree speaks for itself. Was there an intimidation factor in working with him? How did you find your chemistry?

MC: That just came from me being a total fanboy. Me and Craig hit it off pretty well. Initimidated? I don’t know if I’d say intimidated by his presence. We just had a lot of fun on the set. That’s all we really did was have fun.

How much could you personally identify with Morris and his growing pains?

MC: Me and Morris have a lot in common as far as the relationship between him and his father and his love for rap music… It’s just the whole falling in love part, that’s just not me right there. That one part. But basically everything else is just like me. Morris is Markees.

You also have some great rap scenes. Are you a rap fan, or did you have to hone some of those skills?

MC: I don’t really rap that much myself, but that’s all I pretty much listen to right now. That’s all I’m into. 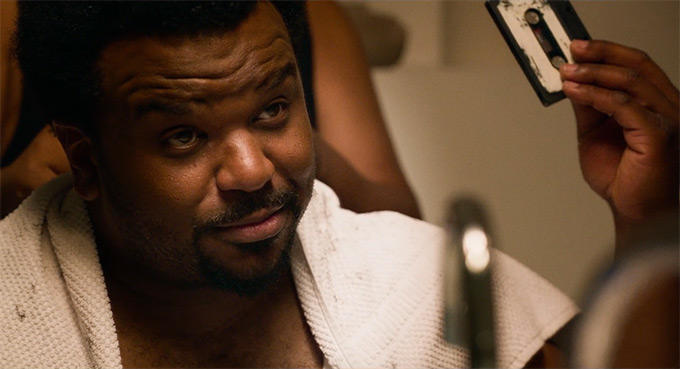 Markees has an entrenched confidence that really works in this film. How did you work with him on-set to cultivate your relationship?

Craig Robinson: We got along. He was a little brother to me and he was a real professional. He came out and he did what he had to do and Chad was there and it wasn’t really a matter of, “I gotta’ keep this kid on track.” He did it all. In that final scene he was our final cue so he was pushing me as much as I was pushing him.

There’s a youth talent show following the premiere with a number of youth arts organizations participating. What are you getting yourself into here?

CR: Uh, I have no idea. I’m glad I’m hosting it but I’m not worrying about it. But now you put some worry in my brain, Nate. Thanks a lot.

I’m projecting once again, sorry. It’s my nature. This role is a bit of a departure for you, but I imagine there will be more of an appetite to see you play characters that straddle the comedic and the dramatic. How did you arrive at this project?

CR: My agent sent me the script and then I met with Chad who ended up telling me that he had discussed me with David Gordon Green, who directed Pineapple Express. That’s pretty much how it came to life. Chad for some reason thought I wasn’t interested, but later on he found that I was, and we ended up doing it. I’m so glad I did too, because there were a couple things that popped up but I’m glad that I made this choice.

Heidelberg’s racial homogeny is overt, and the film plays off of that. What was the experience like shooting in Heidelberg?

CR: I had never experienced anything like that. It was my first time shooting outside the country. I loved Heidelberg. It was a nice and quaint town, kinda quiet, and really clean. And then we went over to Berlin, and Berlin was like, “C’mon, bring it. Whatever your sin is, we got you.” The difference in Germany is that… if you’re scheduled to shoot 10 hours, it’s not turning into 11 or 12 or 13 hours. It’s 10 hours and then you’re out.

What do you hope audiences can glean from this film?

CR: The way that [Curtis] respected his son. The way they got along was incredible to me as far as how Chad wrote that. I haven’t seen any father-son combos like that. Like, your son just cursed you out, OK, let’s chill. Let’s get ourselves back together. Let’s get on the same team here. I think respect and being on the same team is important. That’s what it really is about: respect, love, support – all that good stuff.