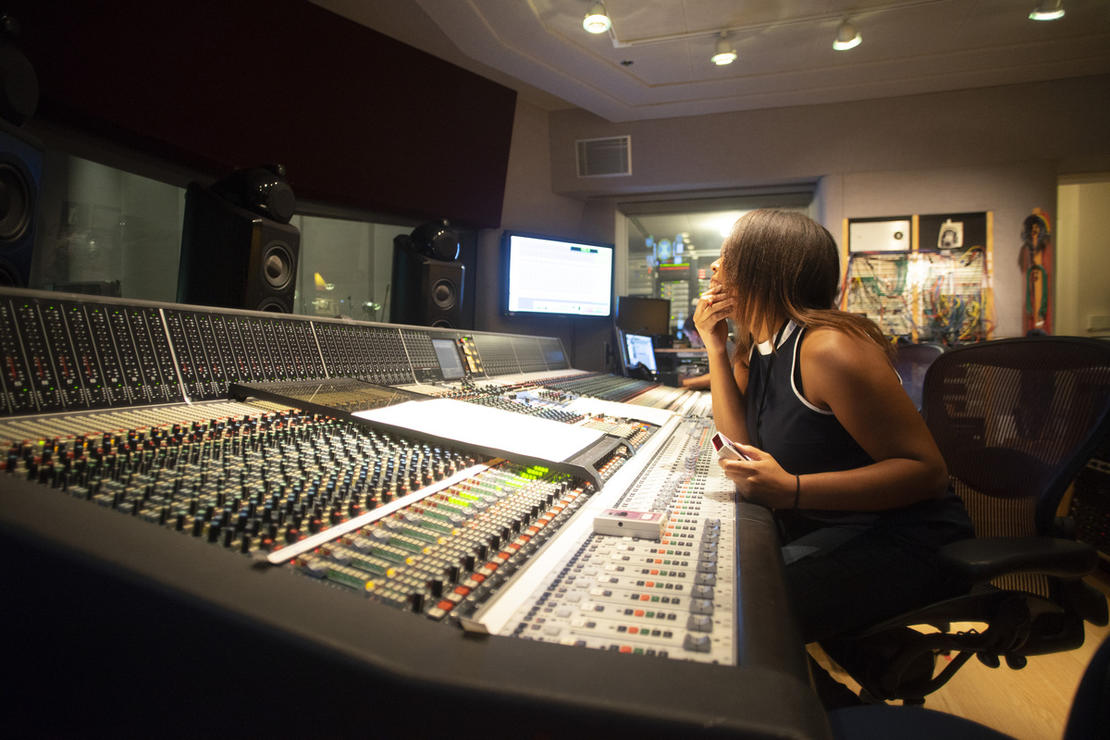 Alana Hauser is the manager of Sundance Institute’s Catalyst and Women at Sundance programs.

In a recent New York Times interview, film composer Tamar-kali identified herself as “an outlier within the outliers.” As an Afro-indigenous punk rocker and composer for Sundance Film Festival features Mudbound and Come Sunday, Tamar-kali is one of few women, and even fewer women of color, in the male-dominated field of film music.

This Women’s History Month, we want to spotlight the often-overlooked community of female composers. By now, the gender inequities across the film industry have become common knowledge: only 4.2 percent of the 100 top-grossing American films are made by female directors. But a recent study released by the USC Annenberg Inclusion Initiative revealed that, across 1,100 top-grossing movies from 2007 to 2017, only 1.3 percent of all composers were women.

As a proven artist pipeline, the American independent film sector is one place where there are opportunities to create change. In 1987, Sundance Institute launched the Film Music Program to connect composers and directors, giving them firsthand experience of the collaborative process, with the goal of nurturing the development of music in film. Just over the past two decades, we have supported more than 50 women composers through this program, including Laura Karpman (Paris Can Wait, STEP), Heather McIntosh (Compliance, Z for Zachariah), Sherri Chung (Nancy Drew and the Hidden Staircase, Riverdale), and Germaine Franco (Dope, Vida, Tag). At this year’s Sundance Film Festival, 8.7 percent of films and projects were composed by women, and while markedly ahead of the mainstream industry, we still have a long way to go. In celebration of these vital women’s voices, see below for a guide to the 2019 Festival films featuring women composers, and be on the lookout for more of their work down the line!

Clemency
Director and screenwriter: Chinonye Chukwu
Composer: Kathryn Bostic
Years of carrying out death row executions have taken a toll on prison warden Bernadine Williams. As she prepares to execute another inmate, Bernadine must confront the psychological and emotional demons her job creates, ultimately connecting her to the man she is sanctioned to kill.

Hala
Director and screenwriter: Minhal Baig
Composer: Mandy Hoffman
Muslim teenager Hala copes with the unraveling of her family as she comes into her own.

Animals
Director and screenwriter: Sophie Hyde
Composer: Zoe Barry
After a decade of partying, Laura and Tyler’s friendship is strained by Laura’s new love and her focus on her novel. A snapshot of a modern woman with competing desires, at once a celebration of female friendship and an examination of the choices we make when facing a crossroads.

Director: Nisha Ganatra
Composer: Lesley Barber
A legendary late-night talk show host’s world is turned upside down when she hires her only female staff writer. Originally intended to smooth over diversity concerns, her decision has unexpectedly hilarious consequences as the two women separated by culture and generation are united by their love of a biting punchline.

Toni Morrison: The Pieces I Am
Director: Timothy Greenfield-Sanders
Composer: Kathryn Bostic
This artful and intimate meditation on the legendary storyteller examines her life, her works, and the powerful themes she has confronted throughout her literary career. Toni Morrison leads an assembly of her peers, critics, and colleagues on an exploration of race, history, America, and the human condition.

Director: Ursula Macfarlane
Composer: Anne Nikitin
The inside story of the rise and fall of Harvey Weinstein reveals how, over decades, he acquires and protects his power even as scandal threatens to engulf him. Former colleagues and accusers detail the method and consequences of his alleged abuse, hoping for justice and to inspire change.

Words From a Bear

Anthropocene: The Human Epoch
Director and screenwriter: Jennifer Baichwal
Composers: Rose Bolton and Norah Lorway
From concrete seawalls in China that cover 60% of the mainland coast to the biggest terrestrial machines ever built in Germany, to psychedelic potash mines in Russia’s Ural Mountains, to conservation sanctuaries in Kenya, the filmmakers have traversed the globe to document the evidence and experience of human planetary domination.

Selah and the Spades
Director and screenwriter: Tayarisha Poe
Composer: Aska Matsumiya
Five factions run the underground life of the prestigious Haldwell boarding school. At the head of the most powerful faction—The Spades—sits Selah Summers. By turns charming and callous, she chooses whom to keep close and whom to cut loose, walking the fine line between being feared and loved.

This Is Personal
Director: Amy Berg
Composer: Aska Matsumiya
While the 2016 election catalyzed the Women’s March and a new era of feminist activism, Tamika Mallory and Erika Andiola have been fighting for their communities for decades. Their stories expose the fundamental connection between personal and political and raise the question: what’s intersectionality, and can it save the world?

Maggie
Director and screenwriter: Sasha Gordon
Composer: Sasha Gordon
A darkly comedic series about a struggling new mom who ditches her dreary postpartum group for the stand-up comedy class next door. In the pilot episode, Maggie struggles with inappropriate fantasies about her live-in nanny.

All Inclusive
Director and screenwriter: Corina Schwingruber Ilić
Composer: Heidi Happy
Under the spell of mass entertainment on the high seas.

END
Director: Yimit Ramírez
Composer: Maria Alejandra Rojas
Juan is dead. Surprisingly, he is given an opportunity: to relive a moment of his past life, but it will not be an ordinary moment.

How Does It Start
Director and screenwriter: Amber Sealey
Composer: Alexis Marsh
With her self-absorbed parents distracted by their recent divorce, twelve-year-old Rain is left alone to navigate the complexities of love and adulthood, and learns to do it her own way.

One Cambodian Family Please for My
Director and screenwriter: A.M. Lukas
Composer: Britta Phillips
A lonely Czech refugee paints an all-too-appealing picture of her American life as she writes a letter begging an organization to send a Cambodian refugee family to resettle in her new, “dreamland” hometown: Fargo, North Dakota.

Sister
Director and screenwriter: Siqi Song
Composer: Karen Tanaka
A man thinks back to his childhood memories of growing up with an annoying little sister in China in the 1990s. What would his life have been like if things had gone differently?

sometimes, i think about dying
Director and co-screenwriter: Stefanie Abel Horowitz
Composer: Savannah Wheeler
Fran is thinking about dying, but a man in the office might want to date her.