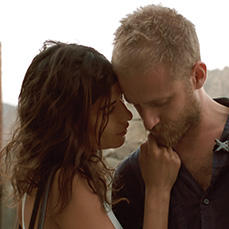 What makes a film independent? Its financing? The edginess of the director’s vision? However you define indie film, the notion of being an outsider – because of a film’s content, or its production outside the studio system – is common to almost everyone’s definition of indie film, as Emanuel Levy points out in his 1999 book Cinema of Outsiders: The Rise of American Independent Film. But a number of movies in this year’s Festival lineup, in addition to being indie films, feature outsiders as characters, or the filmmakers are outsiders to the material they’re covering.

Take Matthew Bate, the Australian director of Shut Up Little Man! An Audio Misadventure, which is screening in the World Cinema Documentary Competition. Bate first heard about the underground “Shut Up Little Man” tapes from an older friend who was a vinyl record freak. The tapes are secret recordings of two older men yelling at each other with particularly vibrant wordplay, recorded by their next door neighbors in San Francisco in the late Eighties. “For me, it began being disturbing, then hilarious, puzzling, then tragic, then all of it at the same time,” Bate says of the men’s arguments, which reach a bizarre, Beckett-like absurdity. “The recording is voyeuristic, an audio peep-show into a world we would normally never be privy to,” Bate says.

Long before videotape and the internet discovered, created, and ruined celebrities, there was audio-verite. The art of capturing life used the format of audio cassettes and small microphones. Bate’s documentary explores the real people and the phenomena of the tapes reaching wide audiences and fans – a viral distribution long before YouTube institutionalized that process. He describes himself as “part fan, part investigator, agent provocateur, anthropologist and journalist. I am always an outsider making documentaries about other people’s lives and this film was no different.”

Bate is younger than his subjects and heard the recordings long after they were popular. “I see all these things as advantages to the filmmaking process as they help the sense of discovery, which is crucial to telling a good story,” Bate explains. “I hope the film will take the audience on a journey with the tapes that evolves from shock and laughter to a deeper analysis of the wider themes and ideas that it inspires.”

Braden King’s HERE, in the U.S. Dramatic Competition, evolved over time. “It began with the desire to make a film that reflected what road trips and transient relationships feel like rather than a desire to tell a particular story,” King says. With co-writer Dani Valent, he created characters and a story and sought out locations to convey the romantic, dreamy underpinnings of road trips. Will (Ben Foster) and Gadarine (Lubna Azabal) are independent travelers, each accustomed to controlling their own space, he as an an itinerant American cartographer, and she as an Armenian expatriate photographer who’s only recently returned home.

“Like Gadarine, I’m working out my relationship to my home country” via photography and film, King acknowledges. “And like Will, I’m trying to map it all out, via a narrative story.  But you can’t always get to where you want to go via logic alone. We arrived at these characters by following this particular map, or in creating [the map], they became inevitable.” The characters have a deeply affecting experience together that neither could have had if traveling alone.

“I certainly come from a more art-based cinematic practice,” King explains. In fact, during the Festival, he is also King is also directing a New Frontier event called HERE [ THE STORY SLEEPS ] a live, three-screen, multimedia presentation. A hybrid film concert that features the collaboration among King, composers Michael Krassner and Tim Rutili and the projection and programming team of Deborah Johnson and Brian Chasalow, HERE [THE STORY SLEEPS] reworks Braden’s original film and features additional footage.

King may be involved in thoughtful reworkings of his film, but “the thing that got me into filmmaking in the first place was some strange combination of seeing films like The Breakfast Club, Repo Man, and Wings of Desire during my impressionable teenage years,” he explains. “Deep down there has always been a desire to make movies, but I had to take my own meandering path to that moment. I’ve been working it out my whole conscious life, slowly attempting to create a cinematic, storytelling vocabulary that felt true.”

While making When the Mountains Tremble, about the war in Guatemala in the 1980s, director Pamela Yates was so much of an outsider that her outsider status benefited her immensely. “I felt like a spy in the enemy camp,” Yates now says. She was interviewing Guatemalan Army generals who were rumored to be committing genocide. At the time, President Carter had cut military aid to Guatemala because of the military dictatorship’s human rights violations. The administration of recently elected President Reagan, however, was considering reopening the flow of arms to that nation. “The generals saw me – a young American woman – as a way of getting their message back to U.S. policy makers,” Yates says. As she was filming from a helicopter with the generals, it was shot down. Because of her show of strength, they allowed her to film their scorched earth operations, resulting in the only filmed material of the genocide.

Yates’ new film Granito, screening in the new Doc Premieres showcase, is a return to Guatemala and to the original film she made there, which may help indict war criminals today. She revisited her original footage last year. “It was a cinematic archeological dig,” Yates explains. “You only really remember what is in the film itself, not in the outtakes. And the most incriminating forensic evidence in the genocide case was found in these very outtakes.”

Yates treats the timely story with respect while laying it out for audiences who are far removed from the events. She was an outsider filming the events, but is now a vital voice to the rest of the world. “When I am an outsider, I can both focus on the specific story, yet include the universal themes. The sole genocide in the 20th century in the Americas took place in Guatemala in 1982. I lay it out. But Granito is also a film about how each one of us – including documentary filmmakers – can contribute our tiny grain of sand, our granito to positive social change and the quest for justice,” she says. “In Granito, you see the Guatemalans doing exactly that, and it is an inspiring human rights story.”

And occasionally, the depth of outsider remove a filmmaker has from his subjects is substantial. Swedish filmmaker Göran Hugo Olsson heard rumors that the most extensive footage of the Black Panthers was actually captured by Swedish newscasters in the late 1960s. When he found the footage, the idea for The Black Power Mixtape 1967–1975, screening in the World Cinema Documentary Competition, was born.

“What I found was amazing and rich. Absolutely crisp footage, news reports and filmed interviews with these amazing personalities,” Olsson says. “I had also found out that this footage had not been seen anywhere outside of Sweden …over 30 years ago.” He saw it as a duty to haul “these fantastic images out of the cellar and into the light of day, to make it accessible to audiences now.”

The layers of outsider status in The Black Power Mixtape 1967-1975 are complex – Olsson finding old footage, made by Swedish reporters investigating a controversial group in a foreign country.

“The Swedish perspective gives the film a very distinctive point of view,” Olsson believes. “If an American were to do the same project with American material, the perspective would be very different and the original interviews I think if conducted by Americans probably would have been different. I’m an outsider looking in, yet the struggle for freedom and respect is also everyone’s story, and everyone brings something personal to it.”

And who’s always an outsider, regardless of how resolutely indie a film is or how much of an outsider the filmmaker is to his or her material? The audience, peering in to each film’s world. Sometimes it helps that the filmmaker was also exploring that world, conveying what they saw and learned with an undeniable honesty.