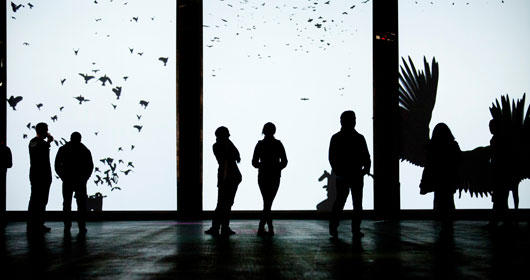 The Treachery of Sanctuary

The newest of the Institute’s Labs, the New Frontier Story Lab was created to identify and foster independent artists at the forefront of the convergence of film, art, media, live performance, music and technology. One of the most seminal artists working in that space is Chris Milk, the subject of our first New Frontier Alumni Spotlight.

Milk came to the inaugural Story Lab in 2011 with the project Rome, based on an album by Danger Mouse & Daniele Luppi that brings together one of the most intriguing and unusual lineups ever assembled in modern music: Jack White, Norah Jones, Italian composer Daniel Luppi, and members of Ennio Morricone’s original orchestra and choir.

Rome is a concept album for which Milk has already released an award-winning interactive film, Three Dreams of Black, and a single-cell-animation video with Jack White. It’s also the soundtrack for a film that does not (yet) exist, based on the characters and story of Alden Bell’s book The Reaper’s are the Angels.

At the Story Lab, Milk worked on the screenplay and story design for ROME with Creative Advisors at the top of their fields in an effort to further develop his project, using the album and the book as his foundation. Since the Lab, he has continued to develop the project by working with a writer to adapt the book into a screenplay.

Milk has proven to be one of the most innovative storytellers in what remains an inchoate segment of art culture. He has already created a body of work that includes projects that are quickly becoming canons in their respective forms. However, he is constantly pushing the boundaries by experimenting with new story and experience designs that leverage cutting edge technology to create art of high integrity.

Here is a timeline of Chris Milk’s projects in recent years.

Milk launched two field-defining projects: The Johnny Cash Project and The Wilderness Downtown, the latter of which features an installation that allowed participants to write postcards to their past selves. With The Johnny Cash Project, Milk resolved one of the biggest challenges the field faces in creating platforms for User Generated Content.

This project serves as an example of how a strong story design is the key to both allowing your audience to contribute without losing the cohesiveness and integrity of the art. Milk found a way to design a world where open creative collaboration (more than one million participants) enhanced the beauty of the artwork, rather than degraded it.

Milk’s collaboration with Arcade Fire deepened with the Summer into Dust concert installation at the Coachella Music Festival.

Through the The Creator’s Project, Milk developed a large-scale interactive triptych titled The Treachery of Sanctuary, with which he took haptic technology from its common use in movement-based video games (i.e. Xbox’s Just Dance), to physical poetry. Milk also reconnected with his collaborator Aaron Koblin to create The Exquisite Forest, currently on display at The Tate Modern in London.

Milk and his collaborators are actually creating new language and methodologies that will become standards in the field. He is also inventing ways to use technology for enabling story creation, in the same vain as Eadweard Muybridge who experimented with motion-sequence still photographs at the dawn of film.

In this current sea-change, where coding is becoming a fundamental storytelling skill, multi-screen and mixed reality experience is the norm, and co-creation with audience is expected, we need pioneers like Milk to take the risks required to figure out the conventions of the future storyteller and to continue creative innovation.