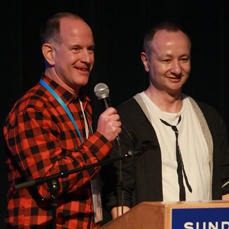 Chaz Bono, the delightfully precocious child of Sonny and Cher, never felt comfortable as a woman. After spending most of his life trying to cope with an existence in a body that was never meant to be his, Chaz finally made the bold decision to undergo gender reassignment and share his journey to manhood in front of a camera crew. Becoming Chaz is the result, a film that starts out as a story about transition and eventually evolves into a true love story.

It’s one in which Chaz finally creates a new appreciation for himself and his new outward identity, while at the same time struggling with the bumpier, more matter-of-fact relationship he shares with his longtime girlfriend. Honest, delightfully humorous, and always considerate in its approach, Becoming Chaz does more than ask us to look at transgender issues as a whole, but guides us on Chaz’s profoundly personal journey of evolving into who he knows he was always meant to be.

The film premiered at the Festival Sunday night at the Prospector Square Theatre. After the screening, co-directors Fenton Bailey and Randy Barbato joined Bono and his girlfriend Jennifer Elia for a Q&A.

Who approached whom to do the documentary?

Randy Barbato: Chaz came to us. He came into our office and said it was okay to film this, so the next day we showed up to Chaz’s house and then two years later we had this.

Chaz, you seem like such a private person. What led to your decision to allow cameras in?

Chaz Bono: I wanted to do this because I wanted to help people. I knew that I could put a face on this issue that people just don’t understand. I wanted to be able to change people’s hearts and minds on this.

Bono: Definitely a woman. Being a woman was a lot harder than being famous. You could figure out how to work that one. But if you’re a guy in a woman’s body, you’re pretty screwed.

Have you had a chance to see the documentary before and was there any portion that was difficult to relive?

Bono: I’ve seen many different incarnations, and it’s gotten better every time I’ve seen it. I’m just glad we got to share it with other people. It’s been an amazing night.

Was there any reaction from the audience that was surprising?

Fenton Bailey: There was one thing for me. I found those bottles really disturbing. You know, [Chaz’s bodily fluid] discharge bottles? I don’t mind knives and needles, but those bottles! So I thought I heard a few gasps and felt some apprehension from the audience.

Did you have any special challenges making this film?

Barbato: We went into it knowing it would be a story about transition, but as documentary filmmakers, so much of the story just started unfolding in front of our eyes. We didn’t know it would be a love story, that wasn’t necessarily part of the plan. But that’s what was happening. And watching Cher processing the whole thing herself … the project was full of surprises.

Are you going to do any continuation of the story or follow-up?

Bailey: Yes. There will be a sequel. And you’ll just have to wait and see!