Q&A: Playwright Shailja Patel on Bookends to a Breakthrough 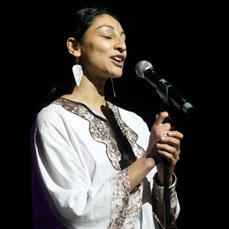 Earlier this month, Sundance Institute’s Theatre Program temporarily moved one of its labs from the Sundance Resort to Massachusetts at the creative haven of MASS MoCA. This crossover setting was the perfect backdrop for slam-poet turned playwright, Kenyan-born now Berkeley resident Shailja Patel to burrow into two weeks of deep revision. Patel, along with fellows Adam Bock and Jennifer Maisel, took her script through intensive workshops to get ready for the stage.

Patel has always been passionate about politics in her work. For years, she has written and performed slam poetry about her personal connection to Kenya’s history. As her poetry performances literally outgrew the slam setup in terms of running time and space constraints, she made the leap into full-on theatre. Her current project, Bwagamoyo, explores the construction of masculinity under the control of colonial empires in East Africa. We spoke to Patel both before and after she attended the Lab to connect the dots of an artistic breakthrough in the making.

BEFORE THE THEATRE LAB:

In a nutshell, how did you arrive at this moment today on the cusp of attending the Lab?

My passion has always been how to capture the political: how to tell truths about the global south to audiences in the global north in a way that’s engaging and accessible and enters people’s hearts. I never thought of myself as a playwright or formal theatre maker, but my work just lends itself to those forms. Submitting to Sundance Institute’s Theatre Lab was a huge long shot for me. I asked myself if it was even worth going through the process, and finally I decided it was worth it even to just challenge myself to see if I could put my work into something that looked like a play. I worked through the night before the submission deadline and hit the send the button. When I heard I was selected, I was blown away.

How has your personal history evolved with your artistic vision?

The two things that shaped me most growing up were first being a Kenyan of the post-independence generation. And second, being a brown minority citizen of the black majority newly independent African nation. I grew up in a way as a double-outsider: as a citizen of the global south and being outside what is considered global centers of power, and being an outsider in the society that I lived in.

That gave me a very specific perspective of being able to stand on the outside and look at how cities work and how power works and then interrogate it and communicate across differences of culture, community, and location. My writing has always been about making the space larger for unheard voices and unseen stories whether that’s women, or people of color, or citizens of colonized nations.

All artists struggle with form and content. How do you confront making your ideas accessible to an audience that may not have a context for Kenya’s history?

One of the reasons I love theatre is because you have a constant dialogue with the audience. If you are a novelist or a poet or a writer, you finish a piece and put it out there and hope it connects. With theatre it is never a finished product. It happens on its legs and you constantly keep putting out a new iteration of it and then you get the feedback of whether it connects or not. You revise it, rework it, and put it out again.

Sometimes it really frustrates me when there’s something I think is obvious such as a piece of history and people don’t know it. For example, many people don’t know that the British had concentration camps in Kenya where they incarcerated 1.5 million Kenyans and over 30,000 Kenyans were killed in Kenyan’s war of independence. I write as if people know that, but then I discover that most don’t know that, so I have to give them that back story for them to even enter the work.

What are the differences between performing your work in Kenya vs. the United States?

The fabulous thing about making theatre in Kenya is that it is something that is very much people-based rather than venue-based. In African life, theatre was never something that just happened in a specific place; it was about ritual and politics and the ways in which a society negotiates all the big passages of life. [In Kenya] I do theatre in public parks, restaurants, bars, wherever I can put it before an audience and get their input. When I’m in the U.S., theatre becomes a more formal thing because, first, there are far more facilities and material resources to make theatre. And theatre is much more structurally formal; it’s seen as something that happens in specific places.

As you prepare to attend the Theatre Lab, what do you hope to get out of this experience?

My goal for the Lab is to really stretch the work as far as it will go: test it, take it apart, and put it back together again, squeeze it, locate the juiciness of it, and see how much bigger it can be. And to really draw on the tremendous resources that are available in working with all those incredible people in the field. My hope is by the end of the Lab I will have the play Bwagamoyo be this whole new creature that has evolved and has a life of its own and is absolutely bursting and ready to hit the stage.

I asked Philip Himberg what I should expect. “Come prepared to play,” he said. I’m reading in preparation Diane Ackerman’s book Deep Play. She writes: “Swept up by the deepest states of play, one feels balanced, creative, focused.” So one of the experimental ideas I have for how we are going to workshop the play is to use hoops like the ones used in hoop dancing. I’m a huge fan and I requested hoops to use in rehearsal as a warm up and as a staging device to define space and energy. So I’m looking forward to doing theatre with hoops!

Describe the community you worked with at the lab?

The majority of my time was spent with my team for Bwagamoyo—director Liesl Tommy; dramaturge Shirley Fishman; actor Owiso Odera; and stage manager Christine Lemme. Philip Himberg also arranged for actor Lenelle Moise to join us for two days to read the part of the Shailja character in the script (which I would normally play), so I had the chance to step back and hear the work purely as a writer.

We all bonded incredibly well. Liesl is South African, Owiso is Kenyan, and Lenelle is Haitian, so we found many commonalities in our migrant histories and experiences. As a newcomer to playwriting and conventional theatre, I was both fascinated and relieved to discover that no matter how experienced and acclaimed an actor or playwright is they still experience the same fears and doubts as I do in the creation of new work.

What were some of the issues you explored with your project?

We’ve ascertained that my script has six beginnings and four endings. No shortage of choices there. The challenge is to decide which one/s to keep and which to cut. I keep reminding myself that in filmmaking, over 90% of the footage ends up on the cutting room floor.

Another challenge for me is to keep moving in the writing: To resist getting stuck on one page or scene or problem. I’m finding that if I just move on to the next writing note, then the solutions to earlier problems will work themselves out—or those issues will become redundant as the script grows and takes new turns.

The inside of my script binder is a solid wall of yellow and pink post-it notes, scribbled with thoughts, ideas, instructions to myself for revisions. Many of these won’t make it into the script, but will be the basis of future writing.

Before you left for the lab, you looked forward to “playing” at the Lab. Was there play time?

Approaching each day with the intention to play was tremendously helpful to me. It allowed me to listen deeply to the work, and to my collaborators, without any agenda. Hooping was the space in which I worked out problems with the script. It released me back into playful mind. Writing for me is as much kinesthetic as it is mental, and I have my best creative ideas when my body is in motion.

A central theme of Bwagamoyo is how we are taught as children to ignore the region of the body between the neck and the knees: “all the soft vulnerable parts.” This is exactly the region that hooping employs, so I encouraged everyone on my team to play with the hoops and try out different tricks. It made for high-energy playful breaks in rehearsal. And wonderful community building with other Fellows and actors, on the sunny days when we gathered on the lawn outside MASS MoCA.

Any breakthroughs? Any new ideas that are changing the course of your play

By Sunday night at the end of the first week, I felt I had hit a wall. I had different lines of feedback on the script duelling each other in my head. Explain more! Personalize! Tell us the story! Don’t lose the politics! Don’t sacrifice the poetry! Don’t throw the baby out with the bathwater!

Panicking, I asked Liesl and Shirley for a “consultation.” They were marvellously reassuring. Shirley suggested I write “sketches” rather than finished scenes, and just bring them to the rehearsal for us to read—we could decide later if, and where, they belonged in the script. Liesl told me I could write as little as five lines, call her to discuss them, and then write another five.

This level of unconditional support for my writing process was exactly what I needed to move past the wall, and turn the writing faucets on again. In the following week, I produced 40 pages of new writing—scenes, sketches, poems. 34 of them found a place in the final version of the script. I can’t say enough about the motivating power of having a team available to read fresh pages each day and give me immediate feedback on them. I described it to a fellow playwright as “the best creative aphrodisiac for a writer.”