Beyond the World Cup 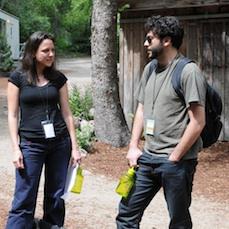 As beneficiaries of this summer’s World Cup basked in its euphoric glow, a much dimmer reality played out in the slums of South Africa. Dara Kell and Christopher Nizza, codirectors and producers of Dear Mandela, took their project to Sundance Institute’s Film Composers and Documentary Lab and the Documentary Producing Lab this summer in search of music and structure capable of evoking the passion and emotion of the Shack Dwellers Movement. What they discovered was a tireless support group, a lifetime’s worth of lessons, and a renewed drive for completing their film.

Can you introduce us to Dear Mandela?

Dara Kell: The film delves into the lives and dreams of three young shack dwellers who live in the vast slums of Durban, South Africa. In 2007, when the government promised to eradicate the slums and began evicting shack dwellers from their homes, Zama, Mnikelo, and Mazwi joined their communities in resisting the evictions on the streets and in the courts. We follow their journey over three years as they take their case to the highest court in the land and learn some hard lessons about leadership along the way.

How did you get involved in telling this story?

Dara Kell: We read about a new social movement in South Africa that was made up of the poorest, most marginalized members of South Africa: the shack dwellers. We visited the movement in 2007 and were struck by the commitment of young people to organizing in their communities. The government had just passed the Slums Act, which legalized the evictions in ways that violated the rights afforded to shack dwellers in the Constitution. We thought that the legal resistance to the Slums Act could provide a narrative arc for the story, and when we found our three main characters, we knew we had the makings of a film.

Christopher Nizza: I had been working for years with grassroots organizations in low-income areas across the U.S. around issues related to housing, health care, living wage jobs, and other things that millions of people around the world consider to be ‘economic human rights.’ In South Africa, we found similar forces at play in the most economically unequal country in the world. Young people we met and filmed shared stories about not telling fellow students at school that they went home to a shack for fear of being judged and ostracized. We then heard realizations like, ‘Just because we are poor in life, doesn’t mean we are poor in mind.’ It is this ‘beautiful struggle’ driven by the young generation that I saw as being relevant all over the world as more and more people find themselves living in similar conditions while dealing with the same social misconceptions.

The film is a look at contemporary South Africa—what did the recent World Cup mean for the country?

Dara Kell: The sinister reality is that in the years leading up to the World Cup, thousands of shack dwellers were evicted from their homes, their shacks demolished, families left homeless, or relocated to government-built shacks far from the city.

We were filming during the World Cup, and there were moments when it was thrilling to witness the euphoria – the flags on every car, the media heaping praise on South Africans for pulling it off with barely a hitch, South Africans black and white enjoying the games. South Africa is a strange country, though. If you step beyond the area around the magnificent Moses Mabhida stadium and the fan parks, and venture beyond the quiet suburbs that are still mostly segregated, you’ll find a vastly different South Africa.

Christopher Nizza: For our characters, the World Cup seemed to provide nothing. They were unable to afford the high ticket prices for games, they didn’t benefit from the temporary increase in job opportunities, and they were even barred from selling goods on the streets during the time of the World Cup. As taxpayers, they contributed to the reported $6 billion spent by the government to build the infrastructure that attracted FIFA to choose South Africa as the 2010 host country.

Talk about your overall Lab experiences and how your film has since changed.

Dara Kell: The Composers Lab gave us space to experiment with music in a way we wouldn’t be able to in the normal workflow of creating the score. We were paired with Ted Reichman, a very talented composer who by the end of the five-day Lab had come up with a score for a key scene in the film. Over the course of the Lab we were questioned, probed, and pushed to get to the core of what we were trying to build towards in that scene and in the larger story.

In terms of creative support, to be in a room full of wise, creative souls who generously gave feedback at a critical point in the making of our film was almost too good to be true. We have a two-hour early rough cut – right away we were told that the first 15 minutes wasn’t getting us to where we need to be. Cut it! Character development, edit strategy, editing style, what was working, what wasn’t working, what’s missing, what the film really means —the list goes on, and amounts to a roadmap for Dear Mandela and a treasure trove of hard-won advice that I will carry with me for the rest of my filmmaking career.

Christopher Nizza: Our experience exceeded even our lofty expectations. A danger we strive to avoid as we craft Dear Mandela is the situation where we are working in isolation. The Labs were a great opportunity to get out of our edit bay in New York City and into the peaceful, working environment of the mountains. The space and keen feedback and discussion sessions we had for our film and participated in for the other films were extremely valuable to us.

Was there a specific inspiring moment that you’ll take away from the Labs?

Dara Kell: On the last day of the Labs, after a week of intensive discussions about music, storytelling, feedback on our rough cut, one-on-one sessions with the advisors, packing my mind with inspiration and guidance for the next leg of making this film, we all went for a hike. We got to the top of the mountain and stopped at a waterfall, which was smashing into the rocks below. We were scattered in small groups around the waterfall, giggling and getting soaked by the spray. I looked around and thought about the individual moments I’d shared with every single filmmaker, musician, and Advisor there. Each artist had generously shared with me their deep commitment to honing their craft and to using their films and their music to create a better and more interesting world. I felt so honored to be in their midst.