Benh Zeitlin Unleashes His Beasts of the Southern Wild at Sundance 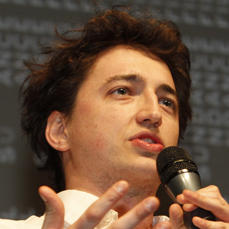 Beasts of the Southern Wild

Six months after Hurricane Katrina, director Benh Zeitlin was crashing on a friend’s floor in New Orleans. The Queens native had been living abroad scouting locations for his seafaring short film, Glory at Sea. “I didn’t want to be an expat; I wanted to tell stories about America,” says Zeitlin of his turn to the Big Easy.

I needed a place where I could be loud and build crazy, rippity, unsafe shit, and not go to jail.

And maybe more practically speaking, “I needed a place where I could be loud and build crazy, rippity, unsafe shit, and not go to jail.” Louisiana proved to be the perfect, unhinged location for his short, as well as his first feature, Beasts of the Southern Wild, which premiered in the 2012 Sundance Film Festival’s U.S. Dramatic Competition.

Zeitlin was profoundly struck by the devastation caused by Katrina and the fierce persistence of locals who refused to abandon their homes post-hurricane. The emotional toil involved in the act of survival was part of the inspiration for Beasts of the Southern Wild. The film follows six-year-old Hushpuppy, who lives with her father, Wink, in “the Bathtub,” a Delta community on the edge of the world. As Wink (Dwight Henry) falls ill, he must teach Hushpuppy (Quvenzhané Wallis) how to survive on her own.

“The broader issue of the film is very much about how nature can take everything away from you,” explains Zeitlin. Hushpuppy’s world literally begins to crumble—from rising temperatures, to melting ice caps, to rising water, to prehistoric charging aurochs.

But the film is not as fantastical as that description sounds. “All the apocalyptic landscapes actually exist in the world,” insists Zeitlin. “You see where the land is falling off and turning into water. You see where the salt water is intruding onto the land and you see rows and rows of oak trees that look like skeletons.”

The broader issue of the film is very much about how nature can take everything away from you.

That’s the reality of south Louisiana, minus the aforementioned aurochs, but even those are based on the science and history that Hushpuppy is learning in school. She narrates the film, so the emotional outpouring of the reality is uniquely hers to own and protect.

“Kids don’t have the self-consciousness of problem solving,” he says of her valiant ability to confront the apocalypse, “Hushpuppy is the Einstein of child scientists—she’s intuitive and understands the emotions of trying to figure out the mystery.”

The multidimensionality of her survival story stems from a collaboration between Zeitlin and playwright Lucy Alibar, friends who met as teenagers at a writing camp. He had always wanted to make a film out of one of Alibar’s plays and was especially interested in Juicy and Delicious about a boy who projected the end of the world as his father was dying.

“The connection of losing a parent and losing a place is what took root,” says Zeitlin about the script for Beasts, which he and Alibar co-wrote.

The pair arduously reworked their script at the Sundance Institute Screenwriters Lab (and later the project continued through the Directors and Producers labs). “The [labs] have a very brutal and good way of not letting you off the hook with what your story is,” says Zeitlin.

With his script in shape, Zeitlin began casting in Louisiana. He prefers working with nonprofessional actors because how he creates characters “is very much collaborative with the person who’s playing it.” They looked at over 3,500 kids—at that point they didn’t care about age or if the character was a he or she.

Eventually they found their “ferocious-tiny-hero character,” as Zeitlin affectionately calls Hushpuppy. He revised most of the dialogue to fit the way Henry and Wallis spoke in rehearsals. “I would take the tests,” he recounts, “rehearse the scenes and shoot them without the script, and then watch and revise.”

But the adventure was far from over for the director. “Our first day of photography was the Deep Water Horizon oil spill,” recalls Zeitlin. Beyond the difficulty of shooting on blockaded water, the extensiveness of the environmental damage was undetermined.

Although the devastation for the town was not as dire as it first appeared, the threat was eerily familiar. For a region whose recent tragedies have slipped from the national headlines, the film’s visceral end-of-the-world scenario may be both a haunting reminder, and a startling prophecy.