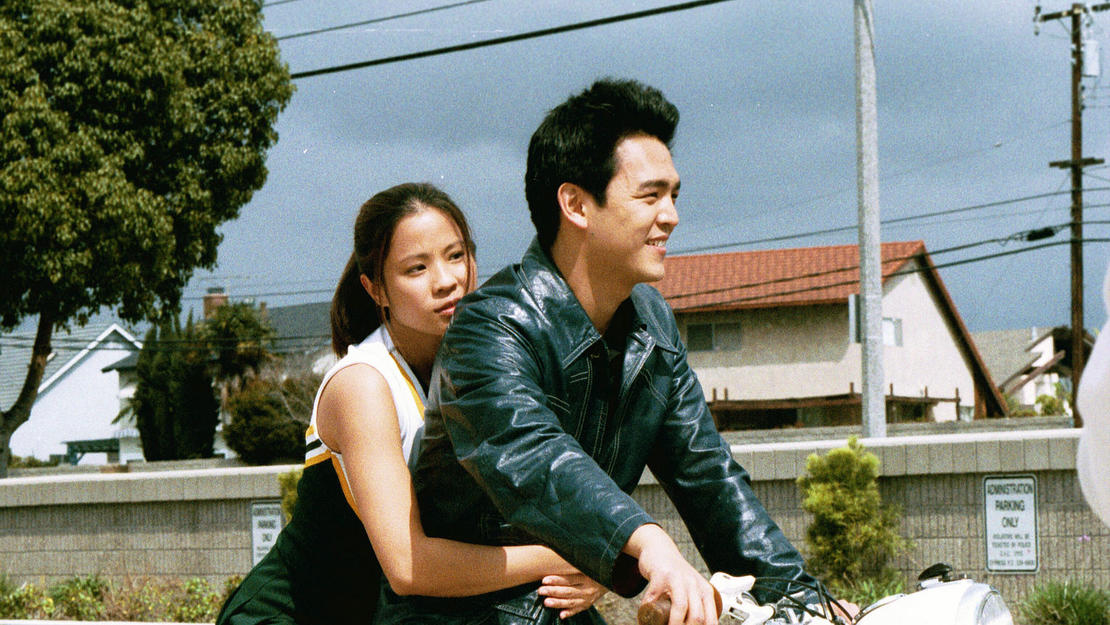 To celebrate these filmmakers and their
work during
Asian American and Pacific Islander Heritage Month in the United States (and Asian Heritage Month
in Canada!), we’ve dipped into our archives to put together a list of
coming-of-age stories and intergenerational family dramas that have
played the Sundance Film Festival or gone through Sundance Institute
programs over the years.

In this genre-spanning (but certainly not exhaustive) list, you’ll find LGBTQ+ romances, heartfelt dramas, immigrant stories, and so much more. Most are available via streaming, so get ready to add a few titles to your queue.

Kate Tsang’s magical comedy had its world premiere at the 2021 Sundance Film Festival earlier this year. In this heart-felt coming-of-age story, newcomer Miya Cech stars as Sammy, a rebellious 13-year-old who struggles to come to terms with her mother’s death — until an a surly magician (Rhea Perlman) takes her under her wing. Catch it through May 2 via the Atlanta Film Festival’s virtual screenings, and stay tuned for news on its eventual release.

Winner of the U.S. Grand Jury Prize: Dramatic at the 2020 Sundance Film Festival, Lee Isaac Chung’s Minari
has been lauded by critics for shedding light on the Asian American
immigrant experience. Nominated for six Academy Awards for 2021, the project was inspired by Chung’s memories of
his family relocating from Los Angeles to rural Arkansas in the ’80s
when he was a kid, and it stars Steven Yeun (
Burning, The Walking Dead)
as well as scene-stealing newcomer Alan S. Kim.
Watch the film now.

“A heartfelt celebration of both the way we perform family and the way we live it, The Farewell masterfully interweaves a gently humorous depiction of the good lie in action with a thoughtful exploration of how our cultural heritage does and does not travel with us when we leave our homes,” wrote senior programmer Heidi Zwicker of Lulu Wang‘s second feature. Watch the film now.

In the dark karaoke rooms of Los Angeles’s Koreatown stripmalls, Kasie works as a doumi girl, a young hostess paid to cater to rich businessmen’s capricious whims. As she struggles to hide her sorrow through soju- and MDMA-fueled nights, her mind is focused on one thing: earning enough tips to continue providing for her bedridden father. When her father’s caretaker unexpectedly quits, Kasie seeks help from her estranged brother, and the siblings are forced to reconnect and reconcile the suppressed trauma that lead to their separation. Watch Justin Chon’s film here.

Native Hawaiian filmmaker Erin Lau
brought her short film The Moon and the Night through Sundance
Institute’s Native Lab in 2017. The 19-minute coming-of-story follows a
teenage girl named Mahina who is forced to stand up to her father when
he threatens to enter her beloved pit bull in a dog fight.
Watch the full film here.

“Gook could be an independent film from the early 1990s, but the perspective on and insight into race relations between Korean Americans and African Americans in Los Angeles are more relevant than ever, 25 years after the fact,” wrote Sundance Film Festival director of programming Kim Yutani. “With humor, heart, and scrappy immediacy, writer/director/lead actor Justin Chon re-centers this moment in history to tell a story about a first generation of Korean Americans amid the chaos and complexity of a multiracial LA, where everybody is looking to survive on their own terms and their own values.” Watch the film now.

Andrew Ahn’s debut feature, Spa Night, stars Joe Seo (winner of the U.S. Dramatic Special Jury Award for Breakthrough Performance) as a
closeted Korean American teen whose world is changed when he gets a job
working at a spa in Los Angeles’s Koreatown neighborhood.
Ahn—who first came to the Festival with a short,
Dol (First Birthday), in 2011—brought Spa Night through the Screenwriters Lab in 2014. Rent it now on Prime Video.

Native Hawaiian filmmaker Ty Sanga’s short Stones
tells a mythical Hawaiian tale about a family torn between preserving
their native land and life and embracing new people and cultures. Sanga
screened the project at the 2011 Sundance Film Festival, and followed it
up with 2013’s Boom and 2018’s
Hae Hawai’i. Watch the full short on YouTube now.

“For immigrants, the American Dream has always been a symbol of
success that meant achieving a new life far removed from past
hardships,” wrote Sundance Institute’s Rosie Wong in the 2009 Festival catalog. That year,
Tze Chun’s
debut feature about a Chinese American family living in suburban Boston
had its premiere in the Festival’s American Spectrum category.
Stream it now on Tubi.

In Between Days is the kind of distinctive filmmaking that
leaves you enriched but also melancholy,”
wrote Trevor Groth in the 2006 Festival catalog about the project about a Korean immigrant teenager living in Canada. “It is at once a love story and
a neorealist depiction of assimilation, as well as an exploration of
intimacy, communication, and human need. Director
So Yong Kim has
fashioned an affecting, multifaceted story that resounds with quiet
humanity and truth.”
Rent it now on Prime Video.

Michael Kang’s acclaimed debut feature—which
went through Sundance Institute’s 2002 Screenwriters and Directors Labs—tells the story of a Chinese American 13-year-old named Ernest
(Jeffrey Chyau) who helps his family run a budget motel. “Kang’s
characters, brought to life by a talented troupe of actors, are
sensitively drawn, genuine, and heartfelt,” wrote programmer Shari
Frilot when the project premiered at the 2005 Festival. “
The Motel is a
treat as a peek into childhood and all of its clumsy victories.”
Stream it now on Tubi or Vudu.

If you caught Alice Wu’s sweet teen romance, The Half of It, on Netflix when it premiered earlier this spring, you’ll want to make sure to watch Saving Face, the director’s 2004 debut. Set in New York City, and centering on a love story between two young women, Saving Face was a personal one for its writer/director, who was inspired to write the script after coming out to her mother as a lesbian. Rent it now via Prime Video.

The title of writer-director Meng Ong‘s debut film refers to its main character, a recent Chinese immigrant named Hong who is taught by another Chinese émigré that in America, people are often referred to by the food that others think they resemble. Caucasian men, the woman declares, can range from meatloaf to escargot. When Miss Wonton finds her escargot, stereotypes and dreams lurch startlingly into reality. Watch now.

Before he took the helm of Hollywood franchises like The Fast & the Furious and Star Trek, Justin Lin brought his solo directorial debut, Better Luck Tomorrow, to the 2002 Sundance Film Festival. (He co-directed an earlier independent film, Shopping for Fangs,
in 1997 while he was still a student at UCLA.)
Better Luck Tomorrow
delves into the lives of a group of Asian American high school seniors
who transform from scholastic overachievers to mischievous petty
criminals.
Rent it now on Prime Video or stream it with the Starz add-on.

“Picture Bride is an enchanting labor of love by Hawaii-born Japanese American filmmaker Kayo Hatta,” wrote Catherine Schulman in the 1994 Festival catalog. “Shot by the masterful Claudio Rocha (The Beginning and the End, Like Water for Chocolate), and starring the extraordinary Youki Kudoh (Mystery Train, Ryukyu no Kaze), the film is an inspired portrayal of Hawaii’s plantation era.” Rent it now on Prime Video.

When it premiered at the 1986 Sundance Film Festival, Peter Wang’s A Great Wall had the distinction of being the first U.S./China co-production since World War II. Written by Wang and Shirley Sun (director of the 1990 Festival selection Iron and Silk), the film stars Wang as Leo, a middle-aged Silicon Valley computer programmer who left China as a teenager. Leo decides it’s time to bring his Americanized son to Beijing for the first time, and a collision of cultures ensues. From the 1986 Festival catalog: “This gentle comedy is full of insight about the perceptions and misconceptions of each culture’s view of one another.” Rent it now on Prime Video.

After finding success with his 1982 comedy-drama Chan Is Missing (streaming now on Kanopy), writer/director Wayne Wang brought his follow-up, Dim Sum: A Little Bit of Heart, to the 1986 Festival. The story follows a San Francisco grad student named Geraldine Tam who feels torn between her desire to be more independent and her obligations to her family. Rent it the semi-old-fashioned way—on DVD via Netflix.

Ed. note: This story was originally published in May 2020. It has since been updated.