“As an activist, do you think you can be objective?” they asked.

I was
quiet. It wasn’t the first time I’d gotten this question, but the stakes seemed
higher now. Just over a year into production, it seemed the documentary
community was starting to take the film seriously, and the voice on the other
end of the line belonged to someone who had seen us at Good Pitch New York—someone who could potentially change the trajectory of our project.

I’m one
half of the co-directing team making Whose
Streets?, a nonfiction account of the Ferguson uprising told by the people
who lived it. The word “Ferguson” has layers of meaning: it is a hashtag, it is
the (re)birthplace of a movement toward Black liberation, and it is a restless
discomfort spanning the distance between the American dream and reality.

The
scenario seems to rise out of the past like a nightmare, from which we awake to
face our worst fears of what society has become—or, to be precise, what we
have allowed it to remain. When the story unfolded on the news, it happened in
minute-long segments, with footage of burning buildings on loop beneath cool
voices that implored, “Wait for the facts.”

The question of whether or not we could be objective was posed
in this familiar, cool tone. I grasped for a response. In my mind flashed
images of tanks, tear gas, and a sea of passionate voices and bodies fighting
for survival. “I struggle with the idea of objectivity,” I said hesitantly. “We
did interview a police chief, and the mayor, if that’s what you mean?” I ended
the statement with an upward inflection—I was sure of my answer, but unsure
how it would be received. I didn’t (and still don’t) believe that objectivity
is the appropriate response to the killing of a teenager in broad daylight. 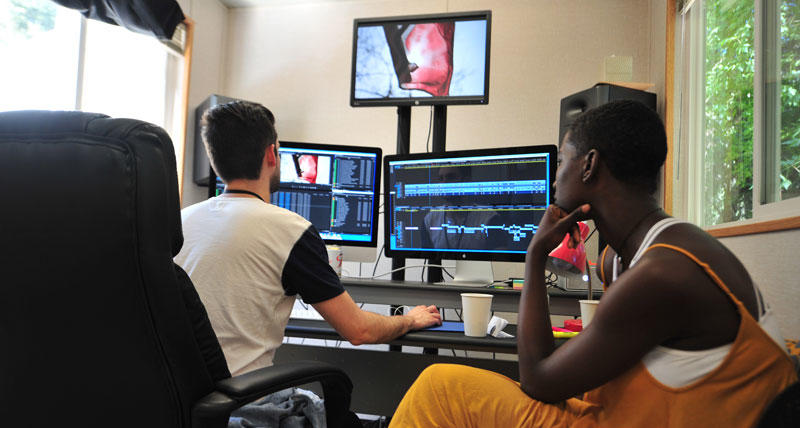 The facts of what happened in Ferguson two summers ago have
already been exposed, but the whole truth of the story is yet unknown. The
truth of this film will reveal itself over time, after the demanding rituals of
production and post-production, when it is delivered to the world. Its meaning
will arise from the interplay of logical perspectives and personal experiences,
and its significance will shift and evolve with time. There is certainly a
place in this film for hard facts, but as a director, I must offer more than neutrality.
I am mediating a delicate relationship between people: those who entrusted me
with their stories and those who will watch the film.

In truth, this journey has never been an objective one for me.
I have felt my way through the filmmaking process, propelled by the support of
peers and mentors, following instincts with no certain outcome, and believing
disciplined impulsiveness coupled with right intentions would amount to
something good and true. This film is recognition that facts and truth are not
the same thing. In recognizing this difference, I acknowledge that I can only
represent the truth as I have witnessed it. To this effort I bring my biggest
strengths, my experiences both beautiful and painful, my culture and its legacy
of perseverance, and my hopes for a better world.

Sabaah Folayan recently attended the Sundance Institute Doc
Edit and Story Lab along with co-director Damon Davis, editor Christopher
McNabb, and their project “Whose Streets?” A Los Angeles native, Folayan attended Columbia University as
a premedical student and graduated with a degree in biology. Outside the box
thinking and passion for social good drew her to community organizing. Most
notably she helped lead last year’s Millions March NYC which drew over 50,000
people.