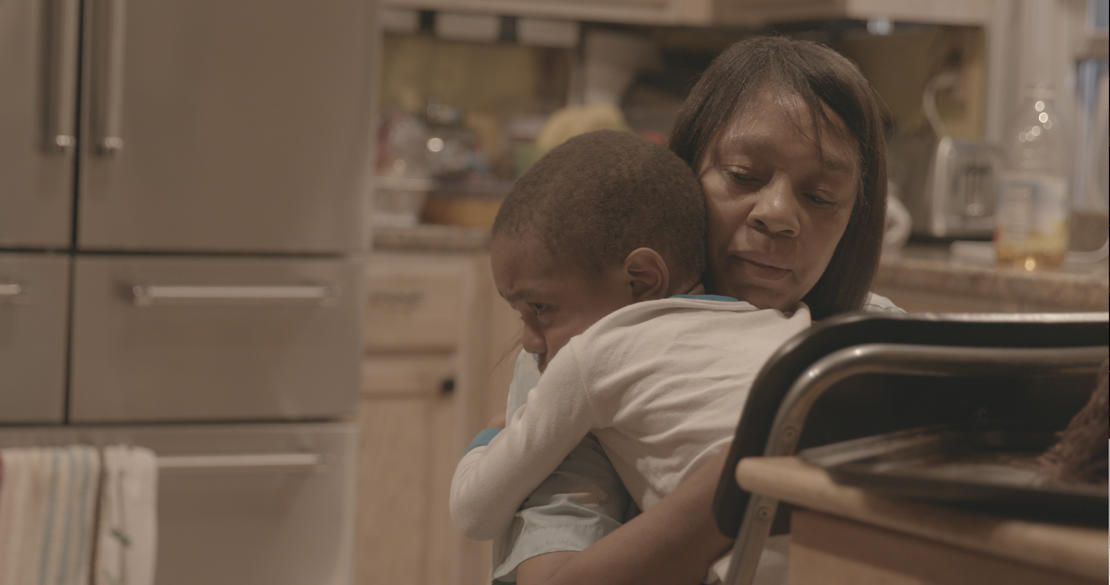 Loira Limbal’s documentary Through the Night is currently streaming at various festivals and online events nationwide; it will open in theaters on December 11. In the meantime, you can watch the trailer here.

Loira Limbal’s Through the Night is set at a 24-hour daycare center in Westchester, New York. A verité look at childcare in the age of late-stage capitalism, the documentary is intent on uplifting and embodying a loving picture of motherhood. The project premiered at the Tribeca Film Festival earlier this year after going through the Sundance Institute’s 2019 Documentary Edit & Story Lab.

The image of a mother lovingly (if absentmindedly) massaging lotion onto her son’s feet, captured on the first day of the shoot, for instance, became a kind of North Star for the intimate moments of caregiving Limbal wanted her film to capture. Likewise, it was a memory of the calming energy Limbal felt while breastfeeding her daughter that drove her and her editor, Malika Zouhali-Worrall, to use breath as a metronome of sorts to organically structure the rhythms of the film.

We caught up with the Bronx-based Afro-Latina filmmaker, who works as the senior vice president for programs at Firelight Media — on the first day of school, no less! — to talk about releasing a doc that feels increasingly urgent and close to home.

What was the driving force behind Through the Night?

The impetus for me with this film was very personal. I was trying to understand how my mother did what she did. She raised four of us working low-wage jobs. She worked a night shift for many years. I was trying to go back and understand more of her interior experience. It’s a question I have about my mother, but I also have it about a lot of women and femmes in our communities who decide to answer this calling of motherhood and mothering.

There’s this quote by Alexis Pauline Gumbs that I love. I’m paraphrasing, but she talks about mothering as less of a gendered role and more as a technology of transformation. It’s this kind of site of all this wisdom and all this expertise that is super intimate, and because it’s so intimate and because it is the domain of women and femmes, it’s invisibilized. But it’s this wealth of wisdom, really, around both caregiving and nurturing, but also meaning and creating meaning.

I’ve heard you talk about the film embodying tenderness as both a politic and an aesthetic. Can you explain that idea?

I wanted to make legible these really intimate, everyday acts that are very specific to this world of mothering, that you don’t think much of because they’re so banal. I wanted to lift that up and say, this is actually super subversive and radical. I think a lot about Saidiya Hartman’s work, and she has a phrase where she talks about care as the antidote to violence.

I remember throughout the four years of making the film — this was when we started to get all the news of, or it was the uptick of coverage around, children being separated from their parents at the border. And I remember a couple cases of police brutality of very young people. So there was also a piece of it that was me feeling like I wanted visual representations of Black and Brown children being safe and being loved and being treated with tenderness. I felt like I needed to see it. I wanted us to be able to see that yes, we’re being killed left and right. And at the same time, we are taking care of each other in a really tender and loving way.

‘Through the Night’ centers around a 24-hour daycare center in Westchester, New York.

The film arrives at a moment that makes its themes — around essential workers, working parents, single mothers — all the more timely. How has it felt screening the film, albeit virtually, amid all of this?

It’s been a big sort of jumble of lots of overwhelming emotions. It’s ironic that it takes a pandemic — a complete social collapse — for people to see this work, this labor, these communities and to all of a sudden be like, “Oh my god, you know, these are actually the people that keep everything running!” To me it’s ironic, and it kind of annoys me.

Then a part of me, the organizer in me, is like, “Well, this is a moment. This is a tipping point.” So let’s lean into what can be done to improve their material lives. At other times I become really frustrated and sad because I feel like while everyone is talking about essential workers, there is a way in which they are still only being reduced to their labor. It’s like they’re seen but unseen at the same time.

Then that makes me lose hope in the possibility of this being a tipping point. Which then makes me be in a really dark place. But then there’s also like, just faith and surrender, which is what I’m also having to do myself a lot in terms of the home front. Trying to have faith that my best will be good enough for my children right now and surrendering to all the many things that are outside my control.

So then apply that to the film and the film’s release. Because sometimes I get really antsy about, well, if we are at a tipping point, then I need to do more, we need to do this, we need to do that, we should do this, we should do that. But then the reality is that I’m constrained by the fact that I am home by myself with a 7- and a 9-year-old, and I have to somehow balance out my time and also my energy and my feelings so that I can show up and be present for that primary task which is mothering the little people that are here with me through these really difficult times.

Manuel Betancourt is a culture writer and film critic. His work has appeared in Film Comment, Film Quarterly, The New York Times and Variety, among others. He was the Writer in Residence at the Sundance Institute’s 2019 Documentary Edit & Story Lab.