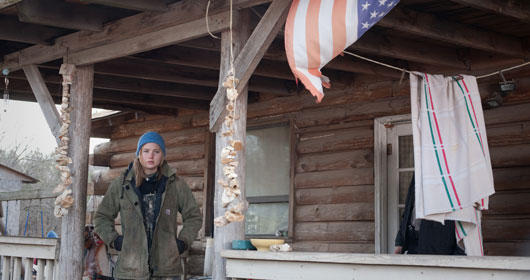 Rewind to 2010 for this Q&A with Winter’s Bone director Debra Granik, before Jennifer Lawrence appeared in the Hunger Games series and won an Academy Award for her performance in Silver Linings Playbook. In Winter’s Bone, Lawrence plays Ree, a teenage girl who embarks on an heroic quest to find her bail-skipping, meth-making father, and bring him home. Below, Granik remarks on the luck she felt in having worked with Lawrence and describes the challenges she faced in navigating a storyline centered around indelible hillbilly stereotypes.

What drew you to want to adapt Winter’s Bone and direct it as a film?

I read Winter’s Bone in one sitting. I had not done that with any book in a long time. I wanted to see how this girl, Ree, was going to survive. It felt like an old fashioned type of tale, with a character I couldn’t help but root for, and with an atmosphere my mind was actively trying to conjure.

Tell us about working with Jennifer Lawrence.

Jen took this role into her heart and worked very hard to enter Ree’s world. She also used what she’s got from her Kentucky roots. In her role, she plays an older sister to a boy and a girl. Jen developed her own way of working with the kids. She made things real for them. She put them at ease. Jen is always learning, absorbing, and challenging herself. I feel very lucky that we had the chance to make this film together.

How do you see Ree as a character?

Ree is focused on her commitment to see her brother and sister through their childhoods. She is willing to fight to keep her family from falling apart. She is also a teenager who experiences helpless feelings when adults around her make deadly choices, and are drawn down into a way of life that destroys them. She can’t do much to get her dad out of the meth world or help her uncle with his chemical dependency and nihilism, yet she still cares about them.

Like many a movie hero, Ree must struggle. Throughout the story she is single-minded in what she needs to do. The search for her father is all-consuming. There is a deadline. We may not know what fuels Ree but in this heightened context, we see that Ree does not take “no” for an answer.

What were some of the challenges given the subject matter?

You can’t go to an area with such an intense history and lore and not lock horns with symbols, clichés, stereotypes, and sensitivities.

The questions that pressed on us while researching this story and scouting for it centered around certain indelible stereotypes: what is a hillbilly, versus a person who lives in mountain country? What is the significance of debris in a yard? What is the reason, and what assumptions do we make about the person living in the house of that yard? We had to get to know that person. Knowing the soul behind the yard helped a great deal. This is just one family, trying to make a go of it.

We needed a liaison, and the community needed an advocate, so we did not inadvertently overlook certain issues or antagonize people. We needed help on every front that city people need when thrust into a rural setting. Moonshine and meth are gasoline on the bonfire of clichés depicting mountain culture. Thirty-five years after Deliverance, even a banjo can still be a loaded symbol. Ultimately the banjo found its way into the film, offering notes of hope and perseverance. I came to think of it as a fresh start for that image.

Are you drawn to portraying characters who struggle in the central roles?

I am drawn to looking at characters who have to solve the puzzle of how to make their lives work. Often that involves a lot of hard choices. What wows me are people who soldier on within difficult circumstances. I want to see how they are going to do it. The cycle of effort, obstacles, trying again…these are the lives that I want to document and portray.