Straight Out of Sundance: America Ferrera on Her Big-Screen Debut in ‘Real Women Have Curves’ 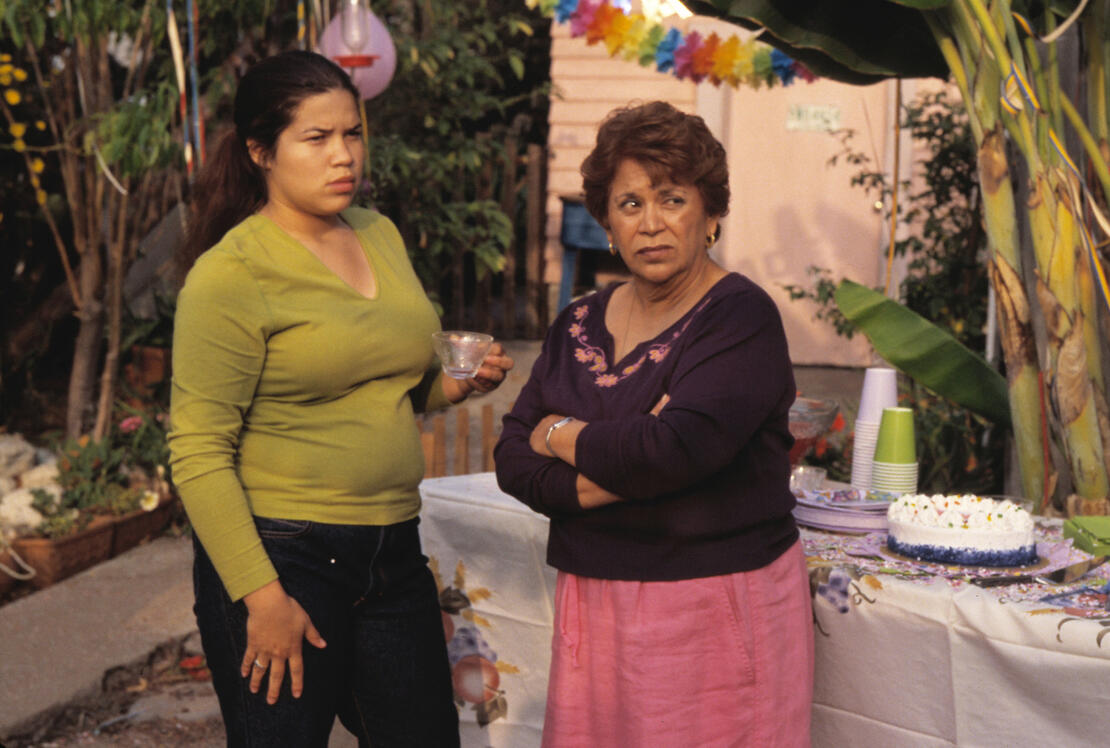 Earlier this year, the Sundance Institute marked its 40th anniversary, and to commemorate the occasion, we caught up with dozens of Institute alumni to learn more about how they brought some of their very first projects from development to debut. In our Straight Out of Sundance series, we’ll be sharing more of their stories with you. Want to learn more about the nonprofit Institute’s year-round work supporting artists around the world — and how you can help? Visit our Membership page today.

America Ferrera was a teenager when she landed the lead role in Patricia Cardoso’s landmark drama Real Women Have Curves, and in a way, she came of age professionally right alongside her character, Ana Garcia, when the film had its world premiere almost two decades ago at the 2002 Sundance Film Festival.

Ferrera remembers taking the phone call informing her that the film had been accepted at Sundance. “I was like, ‘Great. What’s Sundance, and can I bring my mom?’ That’s all I wanted to know. I was 17. I’d never seen myself on screen before. I was not prepared.”

And then came the whirlwind of Park City. The night of the screening, the house was packed. “We premiered in the Library, and then there was a 10-minute standing ovation at the end of the film,” Ferrera recalls. “I didn’t know where I was. I thought I was in a different universe on another planet. I didn’t know what was happening. It felt like nothing was ever the same after that for me, for my career, for my dreams, for what was possible for me.”

“I thought I was in a different universe on another planet. I didn’t know what was happening. It felt like nothing was ever the same after that for me, for my career, for my dreams, for what was possible for me.”

Ferrera’s character is a first-generation Mexican American student living in East Los Angeles. She has just graduated from high school, and is torn between her more traditionally minded mother’s wishes to work in the family’s small textile factory and her own desire to attend college and study writing.

Directed by Cardoso, Real Women Have Curves won the Audience Award in the Dramatic Competition at the Festival that year. Ferrera caught the jury’s eye for her acting prowess, as did Lupe Ontiveros, who played her character’s mother. The pair was awarded a Special Jury Prize for Acting — a surprise to Ferrera, who didn’t realize it was a competition.

“I didn’t know to think we would win, I didn’t know to want to win, and then the film won the Audience Award, which was so lovely, which was overwhelming. Then [Lupe] and I together won the Special Jury Award for Acting, which was just, I mean… It was just too many cherries on the cherry on the cherry… I was 17 years old and all of my dreams had come true in the span of a week.”

In the end, it wasn’t just about awards. The film itself blazed new territory. In addition to challenging the notion of the perfect body type, the movie featured Latinx professionals behind and in front of the camera. It got audiences thinking about the nuance of Latinx culture — and in 2019 became the first Latina-directed film in the Library of Congress’ National Film Registry.

Ferrera went on to roles in television, cinema, and stage, including the Festival films How the Garcia Girls Spent Their Summer (2005), Steel City (2006), Under the Same Moon (2007), and Dry Land (2010), and the popular TV series Ugly Betty.

She has returned multiple times to Institute-related roles — in 2015 as a resource actor for a theater lab and in 2011 as a member of the jury selecting Festival winners. Being a juror was a particular “honor and a privilege,” she said.

“I think that for me, getting to be on the jury opened and softened my heart even more to the process because I know what it feels like to be on the other side… knowing all the expectations and the hopes and the dreams that the artists who have poured their hearts and souls into this work… In a way, it felt like the most tender experience that I’ve had at Sundance, being the juror and handling that role with love and with care.”

Ferrera returned to the Festival in 2017 with a short-form series that she executive-produced called Gentefied, set in Los Angeles’ Boyle Heights neighborhood. The comedy-drama — created by Marvin Lemus and Linda Yvette Chávez — was later acquired by Netflix and turned into a full series that premiered in February 2020; it has since been picked up for a second season that debuts in November.

“[Sundance] has been an important flashpoint for me at so many different times in my career and I have felt so deeply supported and celebrated, which is really nice,” she reflects. “It’s really nice to feel like there’s a whole institution of people who are rooting for me and who have been on this journey with me through my career and who have invited me to come back in all these different roles… I feel very, very grateful to be considered a part of the Sundance family and to be supported as a member of the Sundance family.”