No Pain, No Gain: What Goes Down in the Editing Room 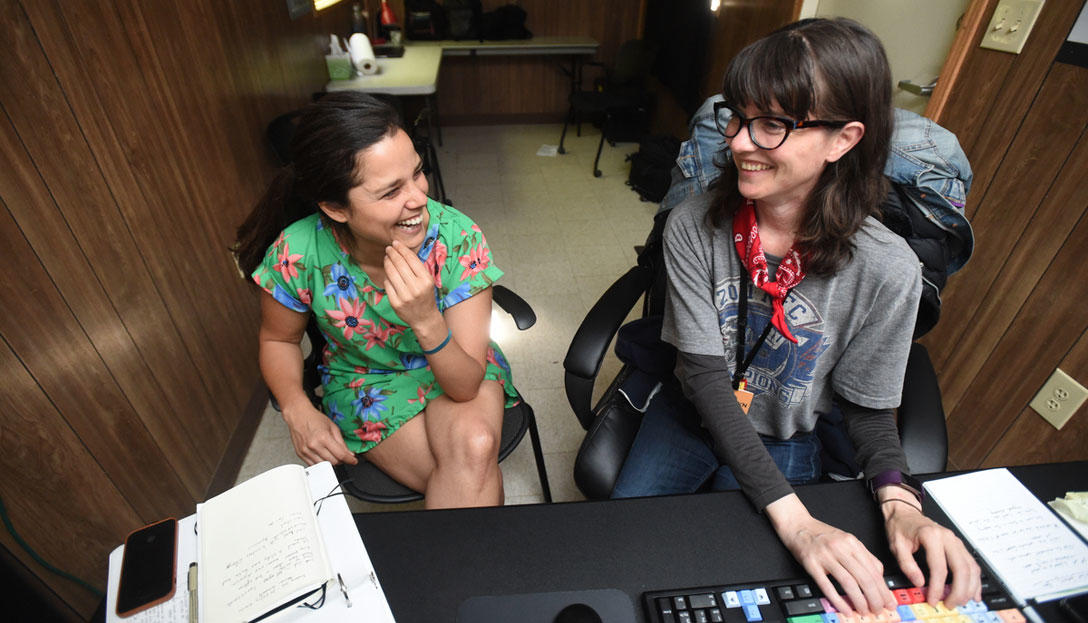 Each year The Feature Film Program (FFP) supports more than 50 new projects across various stages of development, production, and post-production. This month, we’re highlighting the ways in which the FFP supports the crucial creative collaboration between directors and editors through the Sally Menke Memorial Editing Fellowship and the Editing Intensive, which took place earlier this summer in conjunction with our annual Directors Lab.

Honoring the memory of beloved Sundance Institute mentor and esteemed editor Sally Menke (Reservoir Dogs, Pulp Fiction, Inglorious Basterds), the annual Sally Menke Memorial Editing Fellowship supports an emerging narrative editor in advancing their craft and building their career. (Want to learn more? Look here.) The 2017 Fellow is Kathryn J. Schubert, whose work includes Michael Almereyda’s Experimenter and Marjorie Prime, as well as Michael O’Shea’s The Transfiguration. Kathryn attended the 2017 Directors Lab, where she worked with two directors on scenes from their feature screenplays. She will receive a yearlong mentorship outside of the Lab, as well as associate membership with ACE.

Taking place alongside the Directors Lab, the third edition of the Editing Intensive supported Cuban-Canadian filmmakers Rodrigo Barriuso (co-director), Sebastian Barriuso (co-director, producer), and editor Michelle Szemberg with their project 1989, and writer/director Christina Choe and editor David Gutnik with their project Nancy. During the weeklong program, these filmmaker/editor teams worked on their picture edits with guidance from a dedicated Editing Mentor, two-time Academy Award winner Joe Hutshing (JFK, Born on the Fourth of July, Jerry Maguire), and other Creative Advisors attending the Lab.

So what exactly goes on in the edit bays at the Directors Lab? We thought we’d turn things over to the Fellows to provide an inside look at their Lab experience and share advice for aspiring editors.

How long have you been working on your project (script to post)?

Rodrigo (1989): Forever? My brother Sebastian, who co-produced the film, and with whom I co-directed it, started developing the project in 2013 when he was a fellow at the Canadian Film Centre’s Producers Lab. It took about a year from the first draft of the script to the first day of production. It came together quite fast, actually.

Christina (Nancy): I started writing Nancy about five years ago, and we finally shot the film in January of this year.

What stage were you in with your rough cut when you arrived at the Editing Intensive?

Rodrigo (1989): We had been editing for about nine weeks and we were at a place where we were happy with the structure, but knew we needed to work on pace. It always felt too long; we wanted to cut about 15 minutes out of it, but had no idea how.

Sebastian (1989): We were confident that we had a good story but were struggling in making it more dynamic.

Christina (Nancy): When we arrived at Sundance, we were working with an initial cut that was very true to the written script – both in structure and scene order. At that point, we had been cutting for a few months and really needed a fresh perspective to gauge how the film was working with an audience in terms of character, tone, and story.

What were the benefits and challenges of working in the fast-paced, immersive environment of the Labs?

Rodrigo (1989): At the Intensive you had to put together a new cut in about 5 days. Benefits: you have no time to second guess yourself and end up just trying things that you may be more hesitant to try at home – it is incredible to have the feedback of so many remarkable storytellers.

Challenges: there is little to no time to go over your new cut before you present it to make sure that everything is working properly. You watch it when [the advisors are] watching it (I personally found this to be very refreshing.) Fun fact: We cut 20 minutes out of the film, and we didn’t put anything back before we locked it.

Sebastian (1989): When you work in a fast-paced, highly creative environment there is [little] to no time to hesitate. You need to be bold and move fast.The collaborative process inherent to the Labs is one of the direct benefits. At the same time, it is one of the biggest challenges as well. Discerning what to use, what advice would benefit your film the most while at the same time keeping your vision and voice for the film is not an easy job.

Michelle, Editor (1989): The benefits: Having fresh eyes and notes being thrown at us at a fast pace sparked new ideas, which in turn sparked other ideas. Not having enough time to think about things made it easier to take risks and to try things that you might not normally try. There was lots of momentum and excitement, which always helps creativity flow.

The Challenges: Deciding on which advice and notes to take when getting mixed opinions from the various advisors.

Christina (Nancy): The benefit of the intense Lab environment was that there was no place to hide. We got notes within hours of arriving on the mountain and had so little turnaround time to implement them, we just dove in. It fast-tracked our process and freed us from analyzing too much. Editing is such an emotional roller coaster to begin with, but to have veteran filmmakers as creative advisors with you every step of the way and offering immediate reactions heightened the experience.

Kathryn J. Schubert (Sally Menke Fellow): Editing at the [Directors] Lab is certainly a challenge because of the limited time you have to assemble a screenable cut of each scene you’re given. You quickly realize how short a day really is! But you get to know your Fellows pretty quickly in that kind of environment and you learn a shorthand with each of them that allows you to move at a quicker pace as you move along in the Lab. The greater challenge, for me, was learning how to easily switch gears from one Fellow to the next throughout the 3 weeks. My two projects (and all the other projects, to be honest) were very different in style from each other so it wasn’t an easy process for me at the beginning. I certainly feel that the Labs honed and flexed my skills and I’ve come out the other side a more nimble and creative editor.

How do you strike the balance between serving the director’s vision and infusing your own creative decisions – or are they one in the same?

Michelle (1989): I think with our particular film, we had a special connection because of the 10-year friendship the directors and I had. The communication and organic style in which we worked helped serve their vision. We had a lot of trust and respect for each other’s thoughts and choices. All ideas stemmed from a place that had the film’s best interest at heart. It was collaborative, honest, and very authentic.

David (Nancy): The hope is that if a director and editor have decided to work together then there is a mutual trust and shared vision. If I’m cutting a movie, it’s because I’ve fallen in love with the filmmaker’s point of view. And the director has hired me because they respect my approach to the material.

To me, that means ours is a creative partnership from the start and we’re problem solving together. I check my ego at the door. Sometimes I’m the conservative voice in the room and sometimes I’m a bit more radical. We switch roles and push each other to make the movie the best it can be.

Of course, sometimes there is disagreement about how to get where we’re going. When that happens we step away from the screen, go for a walk, talk things out, maybe have a coffee, come back to the edit and try to find solutions.

Kathryn (Sally Menke Fellow): I always try to serve the director’s vision first and foremost. But if I see an alternative that could get us there in a different way, I’m not too shy about speaking out in the editing room. I’m a big fan of trying out different approaches because you never know what you may discover. For the Labs, especially, I wanted to show my Fellows that editing can open up possibilities that they may not have seen when initially shooting the material. If something isn’t quite working the way they would like it to (or even if it is!), there is almost always another way to do it. We were, of course, limited in how many rabbit holes we could go down because of the time constraints, but I hope I was able to show the Fellows the type of creative collaboration that can happen in the editing room.

For the editors, what’s one takeaway from the Labs that you would share with an aspiring editor?

Michelle (1989): Editing is a process and you can’t get it right on the first or even second pass. The film’s shape is sculpted through all the previous edits. Also, learning to not form attachments to any of your cuts, moments, scenes. Learning to let go is one of the hardest lessons for an editor and director.

Kathryn (Sally Menke Fellow): Get the first assembly of a scene put together quickly using what you think are the best moments in the dailies, but don’t get too attached to it because it’s almost certainly going to change. And have fun!

*Editor’s Note: As a next stage of post-production support, following the Editing Intensive, both 1989 and Nancy participated in the Sundance Music and Sound Design Labs at Skywalker Sound, a collaboration between the FFP and Sundance Institute’s Film Music Program, an exciting next step as both teams move their films forward to completion.