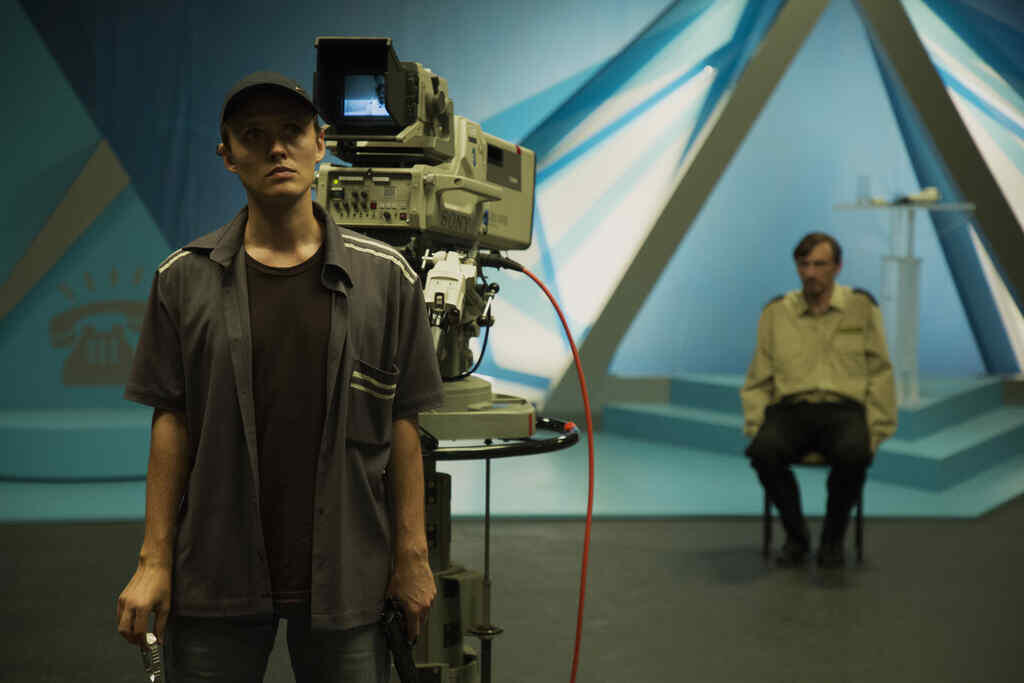 As Warsaw-based director Jakub Piątek tells it, shooting his debut feature — a thriller set in the late 1990s with the threat of Y2K looming — during the COVID-19 pandemic felt somewhat fitting. “Our story is claustrophobic, and our protagonists are locked in a TV studio for a couple of hours,” says the director. “After the lockdown, the actors and crew could easily get into that emotional space.”

In Prime Time, Bartosz Bielenia (Corpus Christi) delivers a standout performance as Sebastian, a 22-year-old who hijacks a TV studio and takes two hostages, demanding that the station air his mysterious message to the public. Inspired by several actual events, the project had its premiere at the 2021 Sundance Film Festival earlier this year as part of the World Cinema Dramatic Competition.

Prime Time is out on Netflix in the U.S. today, June 30, and we recently caught up with Piątek via email to learn more about how the project came together, how his background as a documentary filmmaker informed his stylistic choices, and how the media landscape has been forever changed by the rise of social media.

Ed. note: This interview has been edited and condensed for clarity.

How did you decide you wanted to become a filmmaker? And what was your formal training like?

At the beginning, it was a compilation of everything I was into: working with other people, writing, and photography. As a teenager I was watching a lot of films — it was almost my sole activity during high school. I grew up in a small town without a cinema (a lot of them went bankrupt back in that time). So it was taking trips to the nearest city and watching films on VHS. And if you are fascinated by something, you want to see how it works. It pushed me to Lodz Film School in Poland, where I’ve learned the basics of the craft and met people I’m still working with.

I understand you have a background in documentary filmmaking. How did you bring that kind of sensibility over to creating a fictional feature?

In school, we did both documentaries and fiction. For me it is important to link both of them. From documentaries for sure I took an attachment to research and the idea that “I don’t know” is a really good start to make a film and nothing to be afraid of. Sometimes actors were joking that the take with something spontaneous or unplanned will be the one that gets into the final cut. Also, cinematographer Michał Łuka has a strong documentary background, so we also tried to build a realistic world with a lot of practical lights to be able to move around with a camera more like in a documentary.

From documentaries for sure I took an attachment to research and the idea that ‘I don’t know’ is a really good start to make a film and nothing to be afraid of.

How did the idea for the film come to you? How long have you been working on it, and how did your collaboration with Łukasz Czapski come about?

Me and Łukasz Czapski started writing the script two and a half years before the premiere at Sundance. We felt a kind of longing for rebellion, and our protagonist Sebastian started as that feeling. We found several cases around the world (in the USA, Burkina Faso, Brazil, Holland, and Poland), which triggered curiosity and research. At a very early stage, producer Jakub Razowski was involved. It’s our second script that we wrote together that has made its way to the screen. We have been working together with Łukasz Czapski for a couple of years, so it’s a rather stable marriage. It’s not a method, but we love to rewrite after rehearsals with actors or even in casting meetings. It’s always the first test for the scene. So rewriting is endless and happens up until the last day before we go on set.

How much research went into writing the story and putting it together?

The world we chose to put on screen was not familiar at the beginning. We gathered a strong group of advisors, who helped during scriptwriting and rehearsals. From TV presenters who were famous in late ’90s to TV technicians who helped us rebuild a working TV studio from the period. A meeting with a retired police negotiator was followed up by a day long of improvisation with him and actors, and it turned out to be crucial for the whole team to see this kind of effort and methods realistically. We also use in the film real television archives on monitors and as a rhythmic bit of our story. We gathered a lot of them from national and local TV stations, and they offered great insights for all of us.

Can you talk about the decision to set your film in 1999, on the eve of the new millennium? It’s such a specific setting, and it’s so evocative.

I have clear memories from that time: that mix of expectations and anxiety before midnight on Y2K. People were exchanging money for gold and stacking up food in cans and candles just in case computers went down. And on the other hand, there was this huge party, with the nation getting more and more drunk into the night. It was a background for our little claustrophobic drama that felt absolutely right.

I have clear memories from that time: that mix of expectations and anxiety before midnight on Y2K. People were exchanging money for gold and stacking up food in cans and candles just in case computers went down. And on the other hand, there was this huge party.

Sometimes we like to translate McLuhan’s “the medium is the message” into “an act is the message.” But when you think about the past, back in 1999, television decided what is true and who is important. Right now, everybody can protest and make a speech. But with today’s more democratic social media, individual voices can easily disappear in the cacophony.

What was it like shooting the project during COVID-19? It feels like the project was uniquely suited toward lockdown, given the limited locations.

The scale of our film suits this strange time on different levels. Luckily COVID-19 bypassed production. During lockdowns, we were prepping or editing a film. After the first lockdown in spring 2020, I felt that all of us were thirsty — lacking contact, work, and a sense of normality. So when we could, we eagerly jumped into rehearsals and pre-production. Our story is claustrophobic, and our protagonists are locked in a TV studio for a couple of hours — after the lockdown, the actors and crew could easily get into that emotional space and refer it to ourselves.

It constantly changes. It’s kind of constant rewriting, in my case. I’m starting with questions; then we write, then you meet actors, DP, set designer, etc. And all of the team is pushing it toward the next rewrites. I like that, being open in development and prep. And as a director, I’m someone who is present from the beginning to the end of the whole process, so I really need fuel on this road from the co-creators of the film. Because the film was strongly rehearsed beforehand and edited during shooting, we organically passed the hard stage at the beginning of editing when you hate the material and you need to fall in love with it again.

Have you always been drawn to thrillers? Are there any films or works of art in the genre that you’d cite as inspiration?

Of course — we watched a lot of films in that genre. There was classic Dog Day Afternoon by Sidney Lumet, which is not getting old, or Inside Man by Spike Lee, or another of Lumet’s films, Network. On the other hand, there were these claustrophobic one-location genre films that we also watched, such as The Guilty by Gustav Möller or Locke by Steven Knight.

What was it like premiering the film at the 2021 Sundance Film Festival?

Great! Sundance was the very first festival that we’ve submitted, so getting selected was encouraging. In this pandemic year, we couldn’t attend, so there were small screenings and celebrations of film in our team’s flats scattered around the city.

What’s next for you?

Right now I’m shooting a documentary with a lot of classical music and just started to write something new.