Inspired By: Shaka King on Nas, Little Murders, and His New York Bedroom 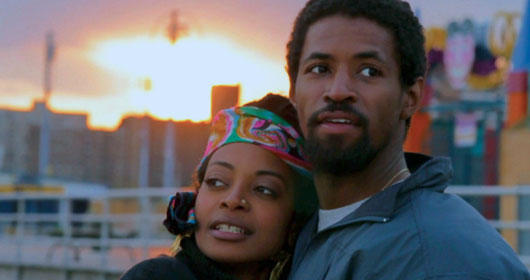 For outliers, New York can often appear to wear clashing visages. After all, it is more frequently depicted in art and media than any other city in the world, and often erroneously. Enter: Shaka King’s Newlyweeds, an incisive new film set in a pre-gentrification Bed-Stuy that captures not just the distinct aesthetic, but the entire disposition of an irregular Brooklyn neighborhood.

King’s drama offers up a cerebral rendition of the classic stoner comedy (i.e., this is not a stoner comedy) and examines the deterioration of a relationship between a couple whose self-medicating ways appear to be pulling them apart. Born, raised, and still living in Brooklyn, King recently shared the music, writing, and other morsels of inspiration that contributed to his creative identity.

“When I was a teenager I used to stay up Wednesday and Thursday nights listening to underground hip-hop on 89.1 and 89.9FM in NYC. DJ Mayhem, Sunset, and a guy named Martin Moore hosted a radio show, as did Stretch Armstrong, Bobbito, and Lord Sear. All those guys were hilarious, and their sense of humor and taste in music shaped my own. I chose this Nas song because it’s my favorite in his catalog and captures the essence of that era perfectly. Those chords sound like fall in NYC, my favorite time of year here.”

“I watched Little Murders for the first time while finishing up one of the later drafts of Newlyweeds. It was liberating to experience something so free-wheeling and tonally undefined. Freed me up tremendously.”

“Getting high and late night bingeing on this show was a big part of my college education. Chappelle’s Show and South Park get a lot of well-deserved props for their humorous social commentary and satire but Wonder Showzen is the champ. They kept it so real, on MTV no less.”

Book: It Happened in Boston? by Russell H. Greenan

“My good friend Amy Montegut (RIP) gave me this book after only knowing me a year. Like Little Murders, it’s a tough one to pin down. Hilarious, thrilling, profound, a re-read is overdue.”

“I spend a lot of time in my room. I get amazing light, there’s a beautiful tree at eye level so I feel like nature’s close by. Plus, between the soft rumble of the elevated train half-a-block away, the roosters in the bodega garden across the street, and the stray bits of dialog from the street below, I go on some amazing audial trips.”