Inspired By: Matthew Porterfield on Bill Callahan, Baltimore, and ‘House of Cards’ 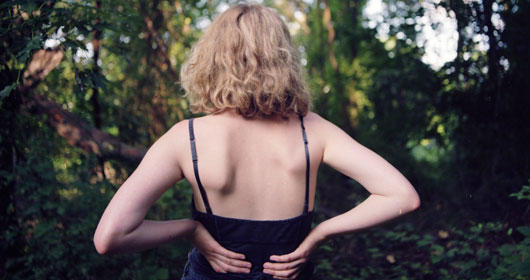 A still from filmmaker Matthew Porterfield’s third feature, ‘I Used to Be Darker.’

Matthew Porterfield’s third feature, I Used to Be Darker, is a delicate exercise in restraint. His fingerprints appear everywhere and nowhere in this strained family drama as he infuses naturalism by seemingly relinquishing control. More than ever before, Darker showcases Porterfield’s undervalued acumen for developing characters by simply allowing them to develop.

The film tracks a Northern Irish runaway, Taryn, seeking refuge with her aunt and uncle in Baltimore, where rather than discovering a safe harbor of support she stumbles upon her family members’ flagging marriage. Darker follows along as Taryn is forced to surrender her own pursuit of comfort in light of her cousin Abby’s emotional well-being surrounding her parents’ split.

Porterfield recently took a moment to discuss the seeds of his creative roots and the varying music, places, films, and other art that have shaped his work as a filmmaker. I Used to Be Darker premiered in the NEXT section of the 2013 Sundance Film Festival.

“I had been listening to his record Sometimes I Wish We Were An Eagle when my marriage was ending, and it kind of got me through. I introduced it to [co-writer] Amy Belk, she hadn’t heard the record, and we listened to a couple songs in particular and it kind of provided an emotional beacon, a context for us. That’s why we borrowed the title, I Used to Be Darker, from one of those songs.”

“I grew up here and then when I was 18 I moved to New York to study film at NYU. I found that most of the scenes I was writing took place in Baltimore, so it made sense later to return and try to make my first film here. I think, for me, Baltimore holds a lot of history. Making films here is a process of discovery. I understand more about this place and the people that live here through the process of making films here. The place inspires–the people certainly first and foremost.”

“The choice to work with non-professionals [actors] was inspired by the work of Robert Bresson. He had an ideological aesthetic reason for doing so.

“In thinking about my last film, Putty Hill, I had been watching a lot of Pedro Costa, In Vanda’s Room in particular. In the case of I Used to Be Darker, because of the music, the fact that we cast musicians who play subversions of themselves, we looked at Robert Altman’s Nashville.”

“Many of the books I really respond to often explore relationships. So, whether it’s The Great Gatsby, or Revolutionary Road, The Mysteries of Pittsburgh, The Moviegoer from Walker Percy—stories about the modern family and modern relationships. I think Darker has a fabric that is a little more novelistic than my previous films.”

TV: The Wire, The Killing, House of Cards

“The Wire is a given, that’s my favorite TV show. Recently I’ve been getting into The Killing. The first season of the House of Cards was pretty addictive. That of course is filmed locally, so I know of people that worked on that. Amy Belk is super into Breaking Bad, but I’ve only watched two episodes and don’t’ have a strong desire to return to it. I guess maybe I should.

“Generally, I think it’s kind of interesting that television audiences have accepted the questionable protagonist, or an antagonist, in the lead. I’m not saying this is new, but it’s certainly a trend. I don’t’ know if that opens things up for the world of cinema too…”