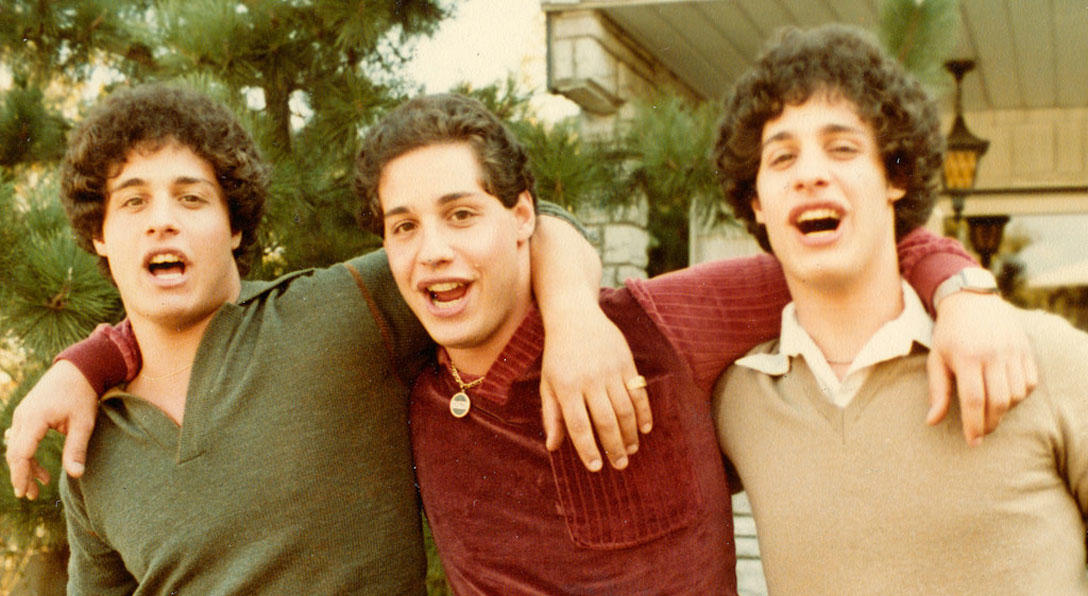 In 1980, a 19-year-old moves away from home to a small college in upstate New York. Upon arriving, strangers wave hello, approach him to chat, and treat him as if they already know him. The teenager soon realizes that someone who looks exactly like him attended that school the year before, and he discovers his identical brother, whom he was separated from at birth. When their story gets picked up in the news, a third young man calls them to say that he thinks they may be triplets.

That’s just the start of Tim Wardle’s new documentary Three Identical Strangers. The story takes so many twists and turns that Wardle admits it’s difficult to talk about it without giving too much away. But with this film, audiences at the 2018 Sundance Film Festival are in for a completely unpredictable journey that not only recounts a fascinating series of events but also explores bigger issues surrounding family, nature versus nurture, and identity.

How did you first get involved in this story?

Tim Wardle: I was head of development at the production company Raw, where my job was to find and develop ideas for broadcasters around the world, and a very talented young producer called Grace Hughes-Hallett brought in the story. … It then took four years to develop and get off the ground and fund. And in that time I just got more and more attached to it, and by the time it was ready to go, I thought, I have to direct this film. And I was really lucky that Raw, Channel 4, and CNN Films took a punt on me really, directing it.

So you weren’t originally slated as the director for the project.

TW: I have directed in the past, but no, I was not hired as a director; I was hired to develop ideas for the company. [But] as soon as I saw it, I knew that it was the single best documentary story I had ever come across, without question.

Obviously the subject matter itself is incredible to see unfold and see all the twists and turns it takes, but I’m also curious what excited you about the story from a craft perspective.

TW: There are a number of things that attracted me to the story. First of all, it combines what I see as two completely distinct types of documentary filmmaking: one is sort of past-tense storytelling with archive and a little bit of reconstruction, and the other is the present-tense, vérité storytelling (what we call in the UK “actuality”). And to me, they’re completely different genres. They’ve got very different styles, very different pacing, very different visual aesthetic. And I was really fascinated by whether it would be possible to combine those two. … Moving through this film I genuinely didn’t know how we were going to do it, and it was a real challenge.

It also works on so many levels as a story. It works as a human story of these brothers separated and reunited, and what impact this monumental event at the age of 19 has on them and their families. It also works as a kind of identity “thriller,” for want of a better word, with them trying to work out who they are and where they’re going with their lives. And beyond that it enables you to ask really big questions about identity, free will, and destiny and that kind of thing. So it’s got so much to it and it’s so rich, it could’ve worked as a short series I think.

How much did you know going into this project versus what you discovered along the way?

TW: There’s two parts to it. There was stuff that was known by different people, and the triplets knew quite a bit of it, but there was information that they weren’t aware of, and we kind of pulled that all together by speaking to different people. But we absolutely didn’t know the ending of the film, and in fact one of the challenges of getting the funding was that people kept saying, “Well, what’s the ending?” And we had a variety of things we thought might happen … but we really didn’t know what the outcome of the film was going to be, and in fact we were surprised with where it did end up.

It seems like so much of this film hangs on your contributors’ emotional buy-in, which comes off so organically and fluidly. How much relationship building did that take?

TW: I think one of the advantages of it taking four years to get off the ground is that we had a lot of time to earn their trust. … And I’m acutely aware with documentaries, particularly when a large part of it is interview-based, there are interviews and then there are interviews. People either bring it or they don’t. And they really did. And what you’re looking for is people to be emotionally honest with you without trying to play up their story. And we’re so lucky that they did decide to trust us and they were emotionally honest about the things that happened. The film goes into pretty dark places at times, and they were completely upfront with us about that.

And I think also the peripheral group of contributors surrounding them were wonderful as well — you know, their friends, the journalists, and some of the other people who we interview. We were lucky with the sort of ancillary cast of contributors that were there.

Some of those scenes are so powerful. The one that comes to mind is the aunt. She just seems so wise and insightful.

TW: Oh my goodness, Aunt Hedy is without question the most extraordinary person I have ever interviewed, hands down, in my entire career. Being in her presence is like being with the Dalai Lama or something. She made three separate people on the production cry. Hedy was just sort of questioning our producer, Grace, about her life, and she’s just got such empathy. And Grace is quite a tough person, but she just started crying. And we had that with two other people.

Her family refer to her as the Yiddish Yoda, because she is just so wise, and there’s something about her and being in her presence is just extraordinary.

In documentary filmmaking, obviously you need your central contributors to be great — of course you do — but it’s the peripheral people who kind of support their story and add depth to it, and I think it’s often not recognized how important they are.

What do you hope audiences experience with this story?

TW: I hope audiences will go on a journey with the film and give themselves over to it and start in one place and let it take them on an extraordinary journey. But I also hope that it will make them think about wider questions about destiny, free will, the importance of family, adoption, genetics, ethics — some pretty heavyweight themes in there.

Did the film significantly change any of your views on topics like that?

TW: I studied psychology at university, so I knew a reasonable amount in advance, but it did really challenge my views. It made me realize that genetics does have a huge influence on who you are. We tend to drift in the direction that our genetics point us. That doesn’t mean that we’re destined to be one person or another, but it does mean that genetics are incredibly powerful. A lot of us like to believe that we have total control over our lives and over the lives of our children, but that’s only half the picture.