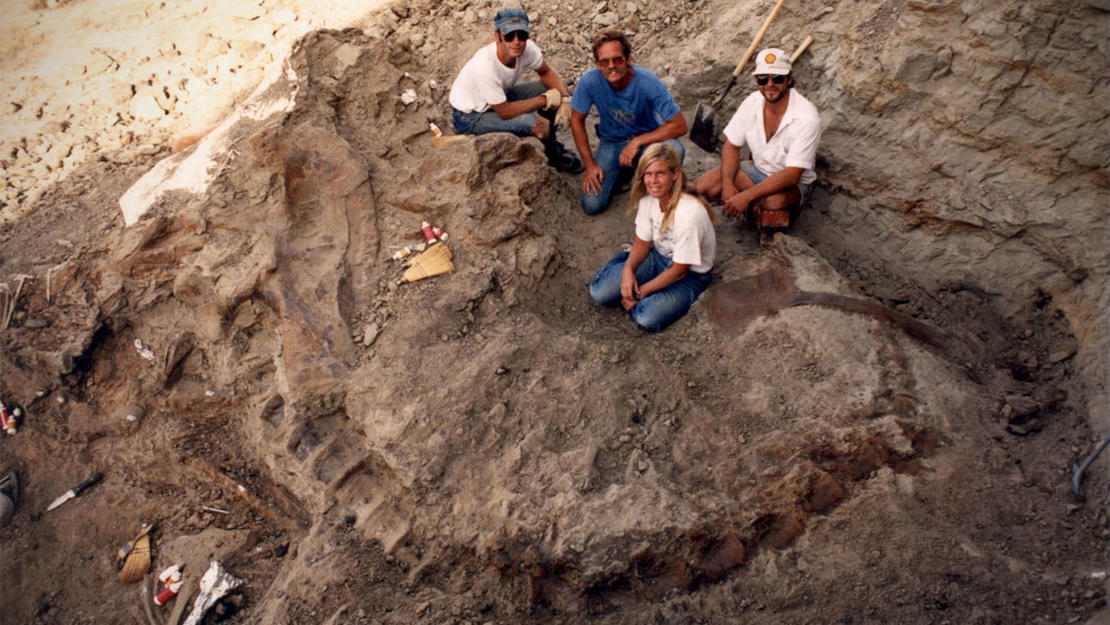 “I’ve jokingly said I wasn’t a full-blown nerd, but I was halfway there,” Todd Miller says, only mildly veiling his proclivity for dinosaurs.

Lucky for everyone else, Miller’s youthful fascination blends with a display of striking filmmaking in the documentary Dinosaur 13. The film itself employs a tantalizing excavation process, beginning with the 1990 discovery of “Sue,” the most complete Tyrannosaurus rex ever found, and later spirals through a mess of legal and political battles that sees the team—led by the doc’s protagonist, Peter Larson—behind the discovery stripped of their beloved T.rex.

After premiering earlier this year at the 2014 Sundance Film Festival, Dinosaur 13 hit theaters on August 15. Below, director Todd Miller talks of discovering the story of “Sue” through Peter Larson’s heartbreaking memoir and eventually embedding himself in the foreign world of paleontology to make Dinosaur 13.

Is it fair to say that the making of Dinosaur 13 was driven by paleontologist Peter Larson’s book Rex Appeal?

We met a lot of different paleontologists around the country, museum curators, people that orbited in the paleontological world. In reading Peter’s book, and knowing other folks we had met in the industry, he immediately jumped out. He was very gracious with his time and allowed us to see a large part of his collection and a lot of places that were off-limits. He was very forthcoming and a very dynamic personality. That, combined with the story, prompted us to dive into the film.

But the original film was conceived to be something different than Dinosaur 13, right?

Right. I’ve jokingly said I wasn’t a full-blown nerd, but I was halfway there. I hadn’t even thought about dinosaurs past the age of 10 or 11 years old, so telling this story kind of reconnected me with that love of science when you’re a kid.

The film first screened at the 2014 Sundance Film Festival. Was there anything that caught you off guard when it came to the public’s response to the film?

It’s been an unbelievable response. There were several people who were actually from Chicago. There was an 8-year-old kid with his mom who was from Chicago, and they said, “I’ve seen Sue in the museum a hundred times, and this makes me want to go see it a hundred more times.” Responses like that really validated why we made the film.

The only unanticipated response I really had was involving this schism in the industry between paleontology and the commercial and academic side of fossil collecting. And we just do an overview of it in the film, but I’ve gotten some feedback from people in the industry and I really would have thought that this film would have mended some of those fences, but it’s really galvanized the controversial aspects of fossil collecting.

The film score plays a huge role in driving this narrative. It feels almost docudrama, but of course it’s set to this great archival footage.

Yeah, Matt Morton did the music, who’s literally just one guy working in his basement in Ohio. I’ve known him my whole life. It’s one of the things I’m really proud about, his kind of coming out party. My hope is that the film does really good things for him.

Music is a very important aspect for the kind of films I want to make, and Matt and I talk in shorthand because we’ve known each other for so long. I’m in New York, he’s in Ohio, and it’s very easy to go back and forth. But we definitely wanted a sweeping, classical, and more epic score. I think he really delivered on it.