‘Dina’ Comes to Sundance: “She’s a Movie Star, and We Are Her Paparazzi” 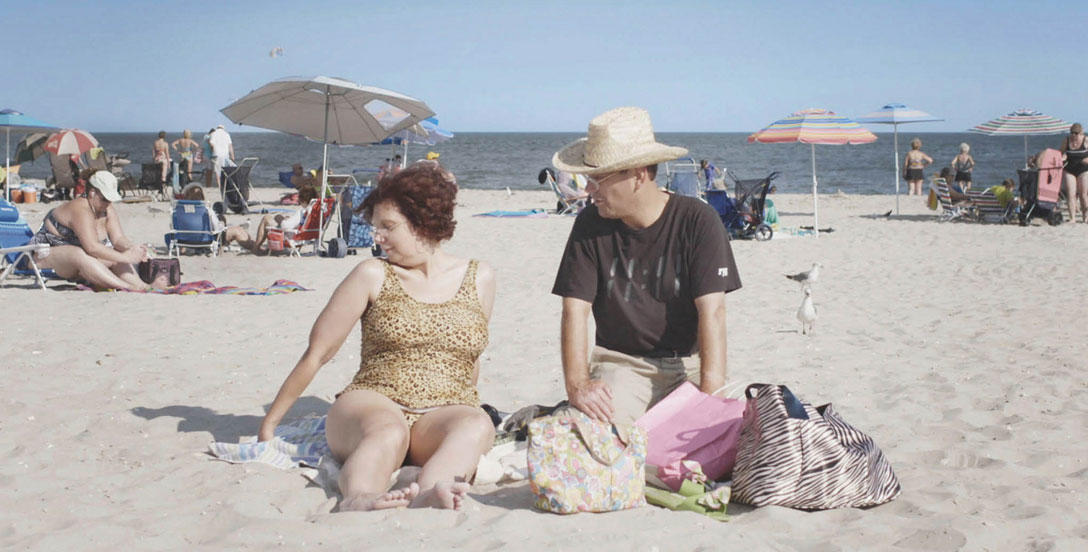 A singular film about a singular woman, Dina took snowy Park City by storm earlier this year, winning the Grand Jury Prize in the U.S. Documentary competition and introducing the world to the one and only Dina Buno. Now the film is set to make its Los Angeles premiere on Sunday, August 13, at NEXT FEST.

As she forthrightly says in the film, Dina is on the Asperger’s spectrum, and her way of seeing and living in the world has a surprisingly universal effect in Dan Sickles and Antonio Santini’s observational portrait. Often unguardedly saying what she thinks and feels, Dina is constantly compelling and truly moving, and also sometimes a bit much.

Through a reserved but precisely framed camera, long takes, and dogged pursuit of the everyday, the directors track Dina’s engagement and eventual marriage to the unceasingly sweet and devoted Scott Levin, and trace their struggles with emotional and sexual intimacy in light of their different neurological challenges.

After a screening of the film at the Library Theater in January, the directors candidly talked to the audience about how they met Dina, their approach to making the movie, and how they collaborated with their subjects to make a film that was produced like an observational documentary and plays like something else.

On how the filmmakers met Dina, their subject, and developed an intimacy that made the film possible.

Antonio Santini: This film was birthed from a difficult experience. Dan’s father passed away when we were finishing our first movie, Mala Mala. The whole team went to his house in the Philly suburbs so that we could finish the film while Dan was figuring out everything. At the funeral, Dina was there. She was very outspoken in a space where most people feel uncomfortable talking. She was there because not only was she Dan’s babysitter when Dan was a baby but also because Dan’s father, Ed, started a club called the Action Club, a Club to which Dina and Scott belong. So Dan went to the club and invited me to join, and we thought this was a special group of people. And that’s when we decided to shoot a film about it. And then Dina just kind of took over, so we focused on her.

Dan Sickles: Dina is the most generous and honest subject that we’ve ever worked with. She has a lot to say, and she has a lot to give. She’s a very brave individual, and she’s someone who as soon as you meet her, you know that you can learn from her. Her experience is so particular and unique that there’s value there. We just watched it for the second time during the festival, and the Macarena shot [during a wedding celebration] says so much about her. How easy it is for most people to do the Macarena no problem—you mimic each other and assimilate. Dina doesn’t have the mechanism to assimilate in the same way. And it creates these incredible, authentic, beautiful moments, because she’s so honest.

On the interplay of documentary methods and narrative-style storytelling in Dina.

Antonio: We really didn’t want to make a documentary. In some sense we wanted to make a fiction film, but still felt ourselves drawn to Dina. We wanted to stay away from as many conventions that are used in documentary as we could, because we felt that would just flatten out her story. We didn’t think that the best way to experience Dina would be to ask her to describe herself, or ask other people to talk about her. The way we were experiencing Dina was by spending many days and hours with her. We developed a system of shooting that would allow the audience to see it the way we were seeing it—from far away, observing it. So there was no close-ups, locked frames only, medium and wide shots only—so that you could always see Dina within the context of her environment.

Dan: We approached things very meticulously. The scene where Scott is going to work—that scene takes maybe 30 seconds [of screen time]. But it involved a week of waking up with Scott at like 4:45 and going to Wal-Mart with him, and planning the shots on the way. We’d go home and review the shots, then wake up the next day and try to do it better. In some ways we attacked it like a narrative.

On whether the filmmakers felt they were blurring the lines between fiction and nonfiction.

Dan: Lines are strange things. They delineate one thing from the other, and I feel like we’re actively working against that. A lot of our inspiration comes from narrative films, reality television, and music videos. We’re not necessarily looking at those inspirations as if we’re walking through a supermarket, like, “oh, this is what we’re going to take”—they’re just impulses that we’re drawn to. This film was about making a container and sticking with it. Sticking with the system of locking off the frame, hanging out in the room or just outside of the room for hours and hours, watching Scott and Dina watch TV. In those moments we’re not necessarily thinking about the inspirations we’re drawing from, they’re just kind of innate. Documentaries are so many things, and we’re realizing more and more the potential of it, which goes beyond genre. But we’re also resisting it a bit. Dina’s not a documentary subject—she’s a movie star. And we are her paparazzi.

Antonio: Even if we were to walk into her house somehow and start shooting, it wouldn’t work because Dina demands to be a collaborator. In between takes she’s saying, “Well, why are we shooting this? What is this for?” Then a dialogue starts and we tell her what it’s for, and she goes, okay, well tomorrow you should come to this event because this connects to that. Or she says she’s very frustrated with this or that thing with Scott, and it’s important that people see it. Even if we were trying to put across the illusion or idea of a document, Dina demands collaboration.

On the film’s formal and visuals strategies.

Dan: We worked hard to compose the shots that are in the film. But you’re also working with reality, which is also why we would let the camera roll sometimes for hours at a time. This is a collection of the best milliseconds from the 600 plus hours of footage that we have of Dina and Scott, and the area, and her friends.

Antonio: Dan grew up in the suburbs of Philly. But he doesn’t live there anymore—he lives in New York. So he went back to revisit it and see it in a new way. Whereas I grew up in Puerto Rico, and I was fascinated by the way everything works differently from where I’m from. So there’s this distance to how we’re shooting also because we’re trying to show you how it is that we see it. We watched Jacques Tati movies like Mon Oncle, Playtime, and Traffic—films where Tati is obsessed with the relationship between the protagonist and his environment. We thought that was part of this story too.

On Dina’s and Scott’s reactions to the film.

Dan: Dina has seen multiple cuts of the film. When we started editing we would show her sequences that we’d been working on. She was here at Sundance for the first weekend, and based on everything that I’ve heard from her, this is something that she feels very proud of, and she feels ownership over it. Which I love. I mean, it has her name on it.

This is her life. Both she and Scott sat in the front row for every screening—and talked through the entire movie. The only current note we have is from Scott, who is a little upset that he’s off key when he’s singing on the beach. But other than that they’re really happy. Dina is writing a book. She wants to get her name and face out there, she wants to be an advocate. She’s blossomed into this movie star. She’s killing it.