Art Over Here, Science Over There: Thoughts on a Messy Border 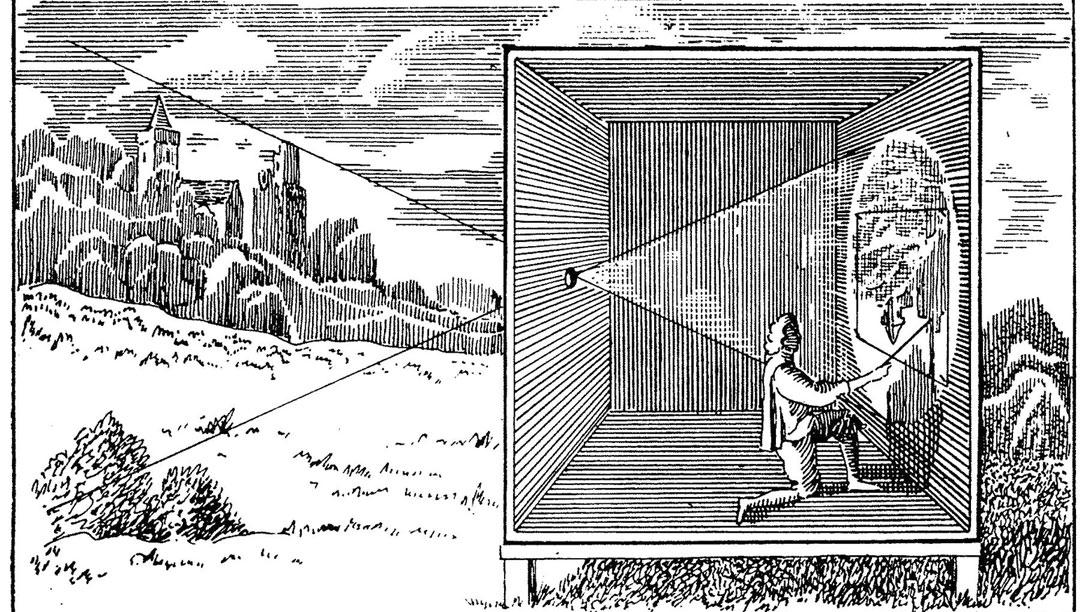 Illustration of the camera obscura principle.

Over the last six months or so I’ve been sluicing my way through Loraine Daston and Peter Galison’s beautiful and rigorous book Objectivity. If you’ve talked to me for more than 15 minutes since then, I’ve probably told you about it. Objectivity is an archaeological dig into the history of the word and the ideal, as well as the changing practices used to chase that ideal.

It’s filled with scientific dead ends and split ends and tangents, of the (mostly) men who were so sure they were right, and what happened when they were replaced by other (mostly) men who then claimed they were right. Who gets to decide? By what standard? Is it God? Is it nature? Is it this new machine? Spoiler alert: consensus is ever-changing and fluid. Consensus, as much as it dictates the times, is of the time it resides in.

One of my favorite anecdotes in the book, relayed early on, is of the origin of our modern definitions of subjective and objective. They are words we take for granted—if not this then what?—but in the 17th and 18th centuries their usages were obscure and technical (back then, objective’s most common usage was in describing microscope lenses).

More importantly, however, their meanings were inverted. From a 1728 encyclopedia of arts and sciences: “Hence a thing is said to exist OBJECTIVELY, when it exists no otherwise than in being known; or in being an Object of the Mind.”

What happened? In the 18th century Immanuel Kant picked up the old words and started using them again, in ways that expanded their historical meaning. From there, some overeager early translators of his, including the poet Samuel Coleridge, introduced Kant to wider audiences with mistranslations and clumsy grafting from their own personal ideologies.

By the mid-19th century, subjective and objective were appearing in dictionaries in their modern, mistranslated form, their definitions diametrically opposed to their original meanings.

Maybe more than any mistranslation, it is this “necessary antithesis” that still haunts us today. Though the meanings have been fluid, the binary has calcified into dogma, with siloed roles to fit each realm. It’s an opposition that fractures and fractures into higher and higher levels of specialization—who gets to do what when. “Objective” is for scientists, leave the “subjective” for the artists.

So much time and energy is spent drawing borders in the sand that the tide of a new discovery, a new headline, a seemingly unprecedented event inevitably washes away. This is real, this is fake, this is science, this is art. What if we’re asking the wrong question? What if it’s something else?

It’s a brow-furrowing now-more-than-ever moment, but one that has crucial precedent. I recently came across the work of László Maholy-Nagy, a founding member of the Bauhaus and lifelong advocate of education that stressed the integration of systems above all else.

Just like a society would fail if the local doctor was the only one with any medical knowledge, he writes, so too our society fails if the role of the artist is concentrated in only those with the ability (or privilege) to proclaim themselves an artist. We must not over-specialize in any given system of knowledge without prioritizing how different systems of knowledge intersect, interact, and influence each other. Writing in 1947, Maholy-Nagy states:

“The artist unconsciously disentangles the most essential strands of existence from the contorted and chaotic complexities of actuality, and weaves them into an emotional fabric of compelling validity, characteristic of himself as well as of his epoch. This ability of selection is an outstanding gift based upon intuitive power and insight, upon judgement and knowledge, and upon inner responsibility to fundamental biological and social laws which provoke a reinterpretation in every civilization.

This intuitive power is present in other creative workers, too, in philosophers, poets, scientists, technologists. They pursue the same hopes, seek the same meanings, and—although the content of their work appears to be different—the trends of their approach and the background of their activity are identical. They must all draw from the same source, which is life in a certain society, in a certain civilization.”

Science, art, nothing we know has never been, will never be outside of the world. It is and is of the world. What else would it be?

I once went to a talk by an acclaimed documentary filmmaker who said he felt like a detective going after the truth, as if truth were a real place that he could reach. That he could hold it and it would remain unshaped by his grasp. I envied his confidence, however much I bristled at the self-professed nobility of his quest. Bristled because it’s the attitude of a long history of science and conquest, where truth is a prize or a destination to be arrived at at the expense of those who were already there or didn’t have the means to get there first. I wanted to know, who’s this detective guy? Where’s he coming from? What are you doing out there?

And we: spectators, always, everywhere,
looking at everything and never from!
It floods us. We arrange it. It decays.
We arrange it again, and we decay.
-Rilke

More tangents. I don’t get to meet many scientists in my everyday, so when I meet one I energetically feel like one of those fish sucking the glass at a pet shop, clamoring to know what’s on the other side of my container. I like talking to people that are experts, people that know more than I do. Everyone knows more than I do about something. I like those moments when there is no expectation but to listen.

I like scientists because for the most part, they want you to understand. And for the most part, their work suffers from a general lack of understanding. I’ve always loved science. I liked experiments and research and the look of all the papers piled up. At a certain age the math and all the prerequisites seemed like they got in the way of what I was after. I switched over to writing and to photography and to making films. Like Maholy-Nagy, I believed that it’s the same source, this life in a certain time in a certain society. This source is essential to any artist, but only recently have I begun to understand more clearly the other side of this symbiosis—scientists need storytellers too.

In June, Sundance Institute and Science Sandbox, an initiative of the Simons Foundation put together a small gathering of filmmakers and scientists. The organizing theme was vision. The details were scarce—we were to arrive at a fancy restaurant at a certain time, there was an agenda for the discussion. A list of guests with their biographies was sent out the night before, an intimidating roll call of physicists, neuroscientists, filmmakers, psychologists. As we filed into a private dining suite, the room felt stuffy and cramped.

Conversation leapt from neuroscience to machine vision to the possibilities that visual impairment provides us with imaging difference. Every hour we randomly swapped places around the table so that the conversation never fixed (surely Maholy-Nagy would have been proud). I bounced between a top field expert investigating how facial information is stored in the brain to a gravitational wave astrophysicist sensing ripples from the big bang. Unlikely links were sparked, course after course arrived, but no deep cut tasting menu seemed to be enough to contain all the seeds of conversation that had been planted.

As dessert came out an exercise was proposed. It was simply this: stare into your neighbor’s eyes for a full two minutes. No talking, no laughing, just direct, unbroken eye contact. I turned to face my neighbor, the gravitational wave astrophysicist. The exercise began. Immediately she laughed, and looked away. I tried my best not to twitch (I’ve always had an eye twitch). Around the room we could hear laughter, shuffling, the occasional clink as someone reached for a glass of water.

It’s really impossible to look someone right in the eyes, because at a certain point you have to choose one. From far enough away I just sort of pick a spot in the middle of the brow and call it close enough. A third eye. But at an intimate distance—a lover’s distance or an LBJ distance or whatever you want to call it—you can’t do that. Am I twitching. Am I being weird. Is it okay to do this. I felt her get uncomfortable, or was I uncomfortable and projecting it through her eyes? Am I just a projection of how I perceive others perceiving me? Am I more than being seen? This person had measured gravitational wave fluctuations at the edges of space, had seen the invisible (to us) contractions of spacetime and calculated their distortions. And now here she was, looking at me, while I tried to figure out which eye would be the eye to look at.

The two minutes were up, and we went around the room and explained what we saw: sadness, empathy, reflection, confusion, resonance, boredom, the suppression of infantile giggle fits. All of the conversations in all corners of the room had converged in this exercise. All the intellectual stuff had broken down and suddenly we were there, like always, dealing with the messy meat business of being a body with two eyes.

We use the phrase “I see” as a synonym of “I understand.” But do we? What is it to look into the two eyes of one person, unsure where exactly they are? How do we make peace with that unknowing? What else is it if not this?

The Cartesian plane mapped a homogenous world suitable for conquest. The undressing of the atom paved the way for the hydrogen bomb. Combustible engines have poisoned our atmosphere. It doesn’t require some supervillain meticulously planning evil for bad things to go down. Sometimes, maybe most of the time, all it takes is ignorance feeding negligence feeding the apathy we feel facing a task that suddenly seems beyond our control. And so it begins again. With our heads too far down in the work in front of us or too high in the sky for a world beyond, we occlude what is around us, which is always the source of our most immediate experience.

I am writing this on Indigenous People’s Day, among many things a reminder to reflect on the power that science, technology, and storytelling possess not to build but also to erase. How even the act of naming our memories have drastic consequences for how we choose to remember. How those memories form blueprints for the future.

Today, the UN came out with their latest climate report. It maps a world that is on pace to cross catastrophic CO2 levels by 2040, with even conservative estimates showing a majority of the world’s population centers to be unlivable within the next century. Knowledge accumulates, we know more and more about how alien our world is becoming to us.

I am thinking on this day how to do just translation of that world.

By Stephanie Ornelas In all things, to progress — to get better — means to listen and to learn. For documentary filmmakers, it’s paramount they