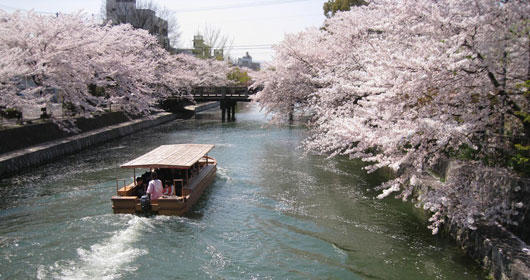 Rooted in themes of death and rebirth, The Tsunami and the Cherry Blossom is an emotive ode to the victims of the 2010 tsunami in Japan. Veteran doc filmmaker Lucy Walker interweaves amateur footage and poetic cinematography to produce a tableau of the rebirth of nature and the resilience of man. The short film won the Jury Prize in Short Filmmaking, Non-Fiction, at the 2012 Sundance Film Festival and was nominated that same year for Best Documentary (short subject) at the Academy Awards.

Beginning today it is available for rent and purchase on iTunes.

I recall reading that your idea for a short about cherry blossoms was conceived prior to the 2010 tsunami, and that the film evolved when the disaster occurred. Is that accurate?

Lucy Walker: Yes, originally I had wanted to make a very short film about cherry blossoms, a “visual haiku” I called it, to be shot during the cherry blossom season of 2011. I had the idea because I was going to be heading to Japan to do a press junket for my film Countdown to Zero, which was emotionally tough work (talking about nuclear weapons in Japan, thinking about Hiroshima and Nagasaki, is important and draining) and I had planned to go to see the cherry blossoms as a sort of personal pilgrimage. Then I had the idea to make a film and brought in outstanding long-term collaborator DP Aaron Phillips to come along with me, and on March 3rd, 2011, I persuaded wonderful producer Kira Carstensen to produce this with me. Then on March 11th the earthquake, tsunami and radiation disaster hit and I was glued to the tragic news coming from the Tohoku region of Japan.

The release of Countdown to Zero was postponed, and my first thought was relief that I didn’t have to go to Japan, because it was so frightening. Then my next thought was that if I had ever intended to make a film about cherry blossoms, then this would be the year to do it, because the symbolism of fragility and fleetingness of life was more apropos than ever. I was very afraid to go, but having learned from a friend who is the London Times correspondent for Japan that it was possible to travel there safely, we flew to Japan and began filming, just as everyone else was evacuating.

Is there a personal connection that you have to cherry blossoms that served as an impetus for the film?

LW: I have always loved cherry blossoms. I grew up in England and loved the blossom season which was so spectacularly beautiful and also signaled the end of the dreary wet winters there. Then when I was 15 and beginning to be very interested in photography I observed that the blossoms made fantastic photographic subjects. Then later when I got to visit Japan (in the wintertime) I learned that the whole country was as obsessed with cherry blossoms as I was, and I resolved to visit in the springtime, to sit under the “sakura” blossoms at a “hanami” cherry-blossom party reading haiku and drinking sake and wondering at the transience of it all. Then sadly my parents both died in quick succession and I was grieving when I visited Washington, D.C., in cherry blossom season and the blossom had a powerful effect on me, snapping me into the present moment. As I tried to hold on to that inspired feeling, and I marveled at the hold these little flowers had over me, I had the idea to make a film.

How long after the tsunami did you arrive in Japan and how long did you shoot?

LW: It was about a week afterwards but the disaster was palpable even in Tokyo, which had rolling blackouts, no escalators or street lights or store lights or night lights, drastically reduced subway, no water or drinks in the stores because of the radiation found in the water supply. Initially we visited Hiroshima, Kyoto and famous cherry blossom spots, as the “sakura senzen” or cherry-blossom front came up from the north of the country. It was impossible to travel to the disaster zone because there were no rental cars or hotels because of all the displaced people—no trains, no food in the disaster zone. But I noticed that everyone I met was thinking nonstop about the people in the North-Eastern region where the epicenter was, and the real story was there, with those people. What was going on for the victims and survivors? I realized that I should go there, and again my friend the London Times correspondent was very helpful in figuring out how one could safely get to the region.

When I got there I was amazed that the disaster area was huge and so much help was needed. There would be a huge empty landscape of devastation with no journalists or film crews and just a few survivors out looking for their house which had been swept away, or an emergency crew looking for dead bodies. It was absolutely haunting and I wasn’t sure we should be there, except that the people we met were so happy to see us, they were comforted by the idea that everyone in Japan and the world were thinking about them and wanted to help, and they very much wanted to tell us their story. By the way, “us” was a tiny crew comprising the DP Aaron Phillips, a fantastic young bilingual fixer James MacWhyte, and myself recording sound. The three of us carried a Canon 5D and 7D package on our backs in backpacks. The radiation was scary but we worked carefully to be safe. And the constant aftershocks – up to magnitude 7 – were terrifying, too.

There is a poetic aesthetic to the film, and it feels anything but contrived. How much of that tone was sourced from the local people?

LW: The tone of quiet grace and courage was inspired by the survivor’s incredibly wise, honest, compassionate humanity. And also perhaps by the understated power of these beautiful blossoms, too.

The film has received a number of awards, nominations, and other accolades. Ultimately, how do you quantify the value of a short film like this one and how do you reflect on the experience?

LW: I count myself as so incredibly fortunate to have had such a valuable experience in every possible way (except for financially—short films are a great way to spend money, and not to make any of it). I am so honored to have been able to help tell some of the stories of fortitude and resiliency and beauty from the Tohoku region, which is still struggling to rebuild after such a colossal calamity. I was so fortunate to have worked with such talented, generous collaborators starting with the production company Supply & Demand, the DP Aaron Phillips, Editor Aki Mizutani, Composer Moby, Producer Kira Carstensen. And I feel so weirdly blessed just to have spent that time looking and wondering at and sharing the cherry blossoms and all they reflect. We had such incredible fortune, including being given a unique interview with the 18th-generation cherry master who has such wisdom about these trees, as you can see in the film. I am so thrilled that the film is now shareable with the world and I hope lots of people will watch it and fall in love as I have done with these magical blossoms, and remember the people of Tohoku.