5 Things You Should Know About ‘Inequality for All’ 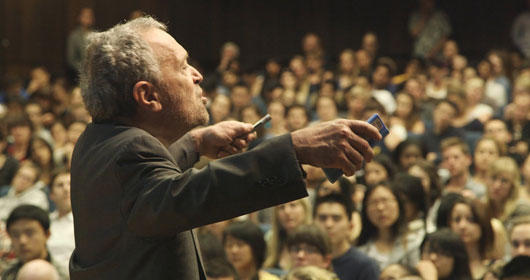 Robert Reich in ‘Inequality for All.’

Jacob Kornbluth would like you to know that he is not an economist. He didn’t matriculate at a revered School of Economics, nor is he especially well-versed in financial markets or models. Quite the opposite, in fact. Kornbluth is an independent filmmaker who didn’t like what he saw in the American economy.

He is a stanch member of that waning beacon of hope that insists that change is still possible. “Three years ago I had never made a documentary before. I was just fed up and I thought I had to do something. So I made this film and now it’s coming out in the top 25 markets in America and has a chance to impact the discussion.”

That film, Inequality for All, enlists the brilliant mind and captivating charisma of political economist Robert Reich as he excavates what is arguably the greatest threat to modern America: economic inequality and a dwindling middle class. Kornbluth recently discussed with us the vigor that drove him to making this unparalleled depiction of a perilous American crisis.

Where did the journey with this film begin for you?

I’d had it. I was frustrated with the discussion about the economy that was going on. I felt like I was trapped in a 24-hour news cycle. I was hearing more and more information about why we were in this great recession, but I didn’t feel like anyone was explaining it to me in a way I could understand. I was desperate to take the words that I was hearing about income inequality and give it some kind of meaning and context.

I had never made a documentary before, my background is in fiction filmmaking, but I knew Robert Reich. As part of this desire to understand what was going on in the economy, I had done a video series with him that had become very successful. I thought, well, maybe there are more people like me who are hungry for the same story that I am.

How do you take what is abstruse subject matter to much of the nation and make it digestible for everyone?

My wife is a schoolteacher. She does not like economics or politics, and she would normally avoid a film like this. She loves this movie. I think it’s because, as she told me, “For the first time, I feel like I get it.” First of all, it’s a funny, entertaining film. It’s hard to hear that you’re going to see a movie about income inequality and put that in the same sentence as “you’re going to laugh and maybe cry.” I don’t think it condescends at all, I think it respects the audience’s intelligence. People who don’t normally understand this stuff need to receive it in a way that activates them.

How does this film showcase Robert Reich the man, as a galvanizing force, as an inspirational figure, and often times a humorous and amiable guy?

This film’s website gives users everything they need to create change—facts, resources, and a “Take Action” component that allows users to do just that.

Part of making a film like this is that you need to be able to answer the audience’s question, “What can I do?” The film simply couldn’t take that on, so we always knew that we had to have a website that in some ways took the inspiration that people were feeling in the theater and give people something to do with that.

When I started making films, we thought that when the film was over that was the end of your job as a filmmaker. When you make a film like this, that entire equation is turned on its head—it’s just the beginning, people want to know what they can do about this stuff.

How do you goad people into action, and what faction presents the biggest challenge in doing so?

I’d say younger people. People of my generation and younger have never seen a social movement work. Reich’s generations went through the civil rights movement, the fight for the Vietnam War—he saw social change happen. He took it as a given that we could change things. He grew up with that belief and it stayed with him his whole life. I think the biggest story of our time is this widening income inequality. One of the consequences of that widening income inequality is that people who are young have not seen these social movements succeed before. It’s really hard for them to not get turned off.

Take my personal example. Three years ago I had never made a documentary before. I was just fed up and I thought I had to do something. So I made this film, and now it’s coming out in the top 25 markets in America and has a chance to impact the discussion. There’s nothing special about where I was coming from to do this. It’s so hard to activate young people and to overcome a lifetime of not believing that this stuff can happen, that we can make a difference.