5 Things You Should Know About ‘American Promise’ 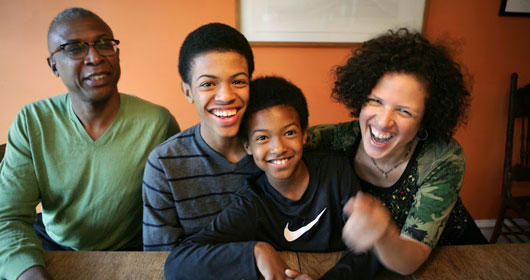 It’s hard to recall a documentary film with a more audacious blueprint than the one Michele Stephenson and Joe Brewster outlined some 14 years ago. At that time, their 5-year-old son, Idris, and his best friend, Seun, were beginning kindergarten at the prestigious Dalton School, a private institution in New York City. Over the next 12 years, Stephenson and Brewster would candidly document the boys’ conflicting experiences as one opted to pursue an education in the public schooling system.

With a keenly observational and holistic approach, American Promise sheds light on the state of educational access and academic performance among African-American middle class family life. Rather than blatantly positing solutions to the challenges facing young men of color in America, American Promise poses questions for all families. Below, Michele Stephenson and Joe Brewster offer insights into their profound journey making American Promise, which is now playing across the country.

This project has been transformational not only for Idris and Seun as young men, but for you as parents. Are you able to articulate the value this experience has had in your life?

Joe: First off, this experience is not over. For us it’s just getting started. It looks like we will spend the next two years of our lives using the film as a learning device. We’re working with teachers, students, and parents. During our New York release, [we] had huge numbers of parent groups come to the screening, and each of those screenings was met with a call to action. Now we have developed four or five tools that parents and teachers and schools can use to help educate African-American boys.

With any film, and particularly with documentary, real world circumstances can jeopardize a project. Was there ever a consideration to abandon American Promise?

Joe: Let me answer that in a more complicated way. We were steadfast, but there were many points in which this film was almost torpedoed. From early on when three of the five children dropped out, to the point when Stacy was diagnosed with cancer, and there was a moment when Michele opted out, wondering if the basketball coach was punishing our son because we had the camera on during the game.

I imagine there was an extended process of building a rapport and accountability with your own son, Idris, as well as with Seun and his family.

Michele: When you as a filmmaker tell a story that’s very intimate and personal, there’s an element of trust that you really have to build. That’s what we kept working on over the years, and sometimes the level of trust ebbed and flowed. It’s a trust in being comfortable being in front of the camera. I think that’s where the art really happens when it comes to documentary work.

For example, there were times when [Seun’s mother] Stacey was really hesitant to give them the camera because she would wonder, “Well how are you going to portray your son versus my son?” And those were completely legitimate concerns, and we spent a lot of time building trust off-camera. Understand that we were out to make a complicated film, not a film with easy answers, not a film pointing the finger, but a film where everyone is flawed to a certain extent.

How did Idris’s and Seun’s receptiveness, or resistance, to this project fluctuate over the years?

Joe: Idris was a little easier than Seun because we’re his parents. The most difficult part [for Idris] became when he was adolescent. Early on, he grew up around film—he knows filmmakers, he know actors. He might have thought that this is what people do. He became more conscious at adolescence, and for good reason, he needed to separate from us.

We think that maybe that’s part of the reason he moved to LA. For the most part, in adolescence we bowed out of actual filming—we didn’t shoot, and often times we weren’t in the room. It became a process of using people whom he identified with and could trust, without the parenting thing getting in the way.

Seun, on the other had, remained consistent. What we offered him was a part of the filmmaking process, because he wanted to be an artist. He was constantly shooting through his adolescence.

Michele: And we used Seun’s material in the opening of the film—his own self-interview. Part of the process that protected them was that we agreed we wouldn’t tell this story until they were adults. Idris always says, for him [the filming] was always a slight annoyance, like telling him to brush his teeth. He actually didn’t think the film was going to be as good as it turned out. They are, both of them, embracing it. They’re doing youth workshops, facilitating conversations with their peers, and they do better at the interviews than we do (laughs).

What has the audience reaction been like thus far, and how has it deviated from your expectations?

Michele: What I find interesting—and maybe in some ways it shows how successful the film is—is that people really think that the camera was on 24/7. We’ve constructed a story that is so intimate, that people think this is everything, when in reality the camera was much less intrusive that people think. In some ways, being a parent doing it somehow makes it less intrusive. But the end product, people feel like they’re in our bedroom—for some people it’s disconcerting.