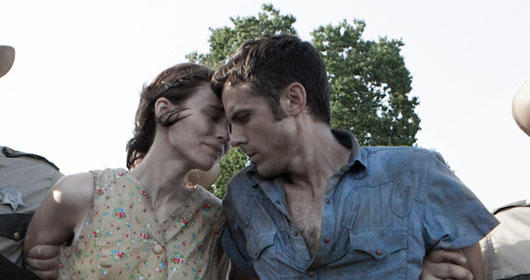 “The before and after are almost always more interesting to me than any actual event,” notes David Lowery, the boundlessly pensive director behind the 2013 Sundance Film Festival selection Ain’t Them Bodies Saints. “The empty space after a person has left a room is something that always speaks to me.”

That personal notion of Lowery’s presents itself early in his directorial debut, as his two leads—played by Casey Affleck and Rooney Mara—are apprehended by officers after a shootout in Texas. Rather than capping his film with what is an achingly climactic scene, Lowery instead opts to investigate the fallout of the pair’s transgressions.

Casey Affleck’s character, Bob Muldoon, is one of the most compelling aspects of this film, and perhaps that stems from this tenacity that he has in striving to reunite with Ruth. Can you talk about the vision that you had when creating Muldoon?

The inspiration for that character really just comes from me. There’s some aspect of making movies that feels strangely equivalent to robbing banks, I think! I’ve spent my whole life trying to get away with it, and at the time that I was writing this movie, I was wondering whether or not that was the responsible thing to do. Bob is a character who’s incapable of asking that sort of question. He’s a little kid. He’s been hanging onto the same idealistic dreams his entire life and is bound and determined to see them through.

His dream isn’t to be a criminal, per se—it’s to be a legend, and a life of crime is just a means to that end in his mind. As far as his passion to reunite with Ruth goes, it’s an interesting thing. The film is, on the surface, a love story, and there’s a star-crossed element to Bob and Ruth. But after the prologue, their love for each other is very different, and I think that Bob doesn’t love Ruth so much as he loves the idea—and the ideal!—of the two of them together. He mistakes that for true love. If he actually, truly, sincerely loved her, he would gotten as far away from her as he could.

There is an undeniable Western aesthetic to the film, and you’ve talked about how that feel is very intentional. That said, the narrative has a depth to it that is very different from what one would expect from a quintessential western film. Why did you choose to essentially open Ain’t Them Bodies Saints with a scene that would often otherwise function as the climax?

That’s just where my mind naturally goes when it comes to narrative. If someone in a film gets killed, I want to know how his family deals with it in the days and months to come. If a character is going to run a marathon, I want to see what he does to prepare. The before and after are almost always more interesting to me than any actual event. The empty space after a person has left a room is something that always speaks to me.

You attended the Sundance Institute January Screenwriters Lab in 2012. What are some of the more notable creative strides you felt you made during that time?

This will perhaps sound hubristic, but the thing that I took away the most was a sense of confidence. It’s such a luxury to sit down and just talk in such great depth about something you’ve made. Sometimes those conversations tear your project down, sometimes they build it back up, but they are always positive, and at the end of the entire process, I found that my resolve to tell this story the way I wanted to tell it was stronger than ever.

There was a marvelous moment where I was speaking to an advisor who was giving me some ideas about how to address some perceived flaws in the script. The ideas were great and yet I had the nagging feeling that there was something off about them. I realized that he was suggesting a version of the movie that, while completely valid, wasn’t the movie I personally wanted to make. You always think about how taking notes can improve your script, but it was exciting to realize that not taking them could be equally as important.

Ben Foster’s role as Patrick seems almost tailor made for him. How did he become involved in the project, and what does he bring to this film?

It feels tailor-made for him because he brought so much to the part. As written, Patrick was a good, decent gentleman. He was the moral center of the movie. Ben took what I had written and turned it into a fully fledged character, one who was far more complex than what I had put down on the page.

That’s what I always hope an actor will do with a part I’ve written, and it was a thrill to see how Ben balanced the essence of the script with his own intentions as an actor—and as a human being. To be honest, we wrestled with this on set; it was a difficult process, and there were times where I wondered if he was making the wrong choice.

We had an argument or two, which is never fun, but they were valuable, and they proved to me that he cared even more deeply for this character than I did. Ultimately, I trusted him, and thank goodness, because his instincts were true.

Can you share a bit about the meaning or origin of the film’s title?

I love titles that set a tone. The title is a phrase that predates the film. It’s been hanging around my head for a long time, and when I started writing this movie, it just felt right. There are all sorts of reasons why it’s right, but the simplest one is that it puts you in the right mindset for the type of experience this film provides. It puts the first wash on the canvas, so to speak. You buy a ticket for a movie with this title, and you sit down in the theater knowing that this is the title of the movie you are about to see, and then the movie begins and on a subconscious level you take that title with you as you watch it. It is the pitch by which the rest of the film finds it’s key.