4 Knight Fellows on How Community Shapes Their Creativity 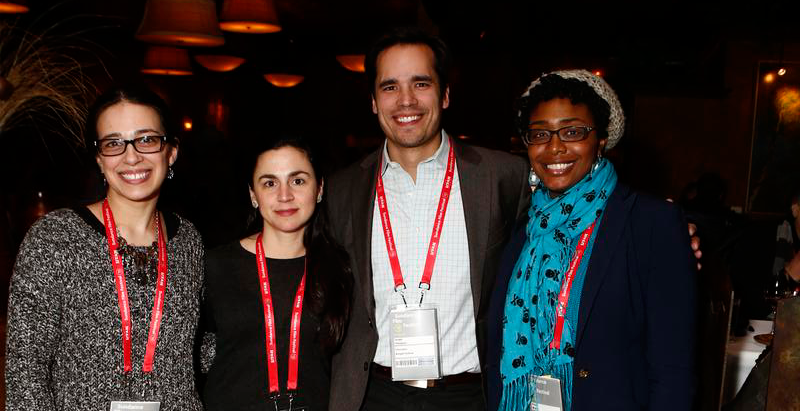 Sundance Institute annually selects up to four artists from the eight Knight resident communities to attend the Sundance Film Festival. These artists reflect Sundance Institute’s commitment to developing and nurturing the next generation of creative voices. Knight Fellows were in residence for five days during the Sundance Film Festival in Park City, Utah, where they participated in a specially curated program. Following the program, we asked each fellow a question about how their artistry is connected to their community: How have you been—and continue to be—creatively inspired and influenced by your community?

“Miami is my home and a place that inspires me as a storyteller. It’s a young city whose stories haven’t been told, and a place ripe with culture and beauty. We are a bizarre, open, vibrant, sometimes unjust place where English is often a second language. I am inspired by the people and landscape, and the disparity between rich and poor, which feels like a hyper expression of what is beautiful and challenging about being American.”

Codina’s directorial and producing debut, Monica & David, was nominated for an Emmy Award and won the Jury Award for Best Documentary at the Tribeca Film Festival. Codina has been featured on NPR’s All Things Considered, ABC.com, Newsweek, and Variety, among others.

“I am constantly inspired and influenced by my community. As a sixth-grade visual and performing arts instructor, I am connected to the pulse of the next generation of artists. I am moved by their passion for art and storytelling. They challenge me to not only be excellent, but to think about things in new ways.”

Watson is a 26-year-old, writer, musician and filmmaker. She earned a master’s degree from the University of Southern California’s School of Cinematic Arts in Film and Television Production. Most recently, her short film Brothers was featured in the Short Film Corner at Cannes in 2011.

“I’m walking down the street with headphones listening to Brian Eno’s Music for Airports, and not listening to the snow-ice crunch beneath my feet, and not listening to the kids burst through a school’s front exit, and not listening to the anxiety about securing health insurance for my family. Just the pulsing, percussive waves of Eno’s subconscious melting into the minutely visceral. I imagine talking to Eno, who now sits across from me drinking green tea, about his peers—that inner circle who speak critically and intuitively about aesthetics, politics, food, babies, the weather, and maybe even music. He says or I imagine him saying, ‘each word spoken or held back, impacts us and the art we express.’

“Part of me wants to believe that I alone am responsible for those pieces of paper and other materials bearing my signature. But it is not true. I have been and continue to be influenced, inspired, and encouraged by the thoughtfulness of my community. I am also inclined to qualify this word community with a word like ‘creative’ or ‘immediate’ or ‘spiritual,’ but that would just closed down the possibilities of these relationships.

“Now I’m not talking to Brian Eno but to my friends here in Philly (filmmakers, dancers, gardeners, mothers, chaplains, teachers) about things that happen, or happened, or the hope-to-happen. These conversations are like water running down a mountainside. They shape the stories I want to write, the music I want to compose, the films I want to produce. Without this is to live on a transparent plain where nothing resides and nothing changes.”

In 2009, Vasquez started a collective of filmmakers known as Steel Gauchos, which produced a dozen short narrative projects that helped him learn the basic language of cinema. He is currently pursuing a master’s of fine arts degree in film and media at Temple University and completing his thesis film, Sun Dog.

Living in the Philadelphia area, there’s a richness and diversity of life that comes from its history, the commingling of cultures, and the opportunities to experience so many different things. I love to imagine the change and the creative influences that evolved here over the past four hundred years.

“It’s just so amazing and inspiring to know that this region has inspired the likes of so many different walks of life from many disciplines. However, for me, what feels revolutionary right now is the arts and our filmmaking community and I am so happy to be part of that chapter of Philadelphia’s life.

The Philadelphia experience for me is like immersing myself in creative waves of sound and images. From the Italian markets to the college campuses to Germantown and Society Hill – what I find in Philadelphia in a celebration of differences that educates and inspires me.

Jen Mitlas started learning about the digital and organic world of sound and music and began her official sound journey by venturing into the digital airwaves. She hosted two radio shows while studying at Montgomery County Community College and was the supervising sound editor for the film Volta Du Mar. She also contributed her sound design skills to short films submitted to the Five Day Film Festival, one of which went on to win an award for best sound design.