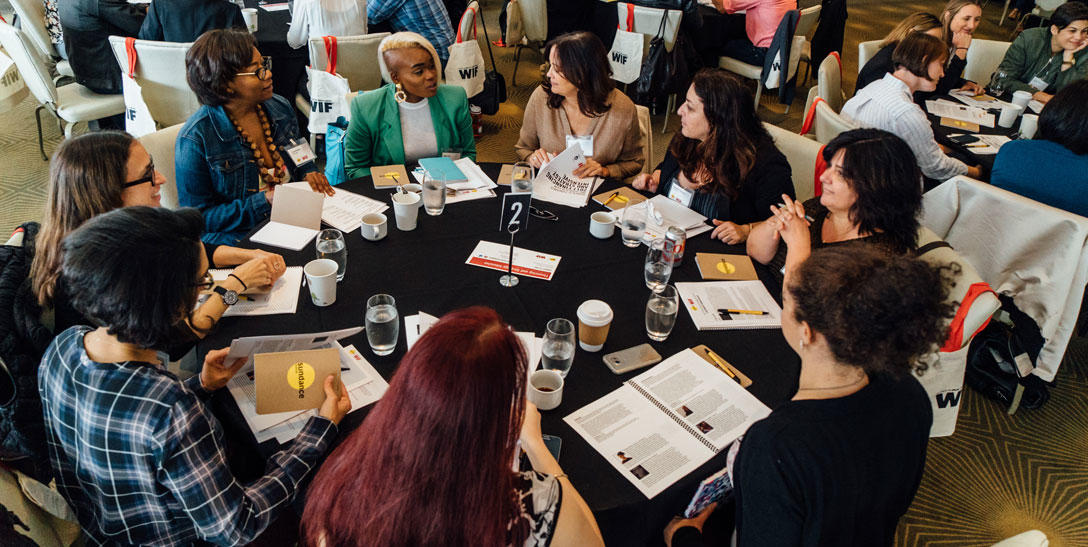 You know how we indie filmmakers are, right? We’re pessimistic, worst-case thinkers. When I saw the schedule for the 2017 Financing & Strategy Intensive, my eyes fixated on those dreaded words: “Pitching Workshop.” I thought, OK, I’m staying home with my cat. (But I didn’t. Because as a pessimist, I couldn’t say no to an opportunity for public humiliation.)

On Day 1 of the conference, after a rousing Welcome address by Women In Film’s Kirsten Schaffer and Sundance Institute’s Caroline Libresco – two women who surely have no trouble talking about anything – we dived into the deep end: roundtable pitching in front of our peers, industry advisors (often producers), and a moderator. And we all fumbled – but we re-tooled, under the generous guidance of experts, and we all fumbled less. Day 2 contained another modified pitch session, with different experts offering strategic advice. Beaten down by repetition, everybody made progress. It happens.

That’s huge, I think, for filmmakers used to living in our heads and doing everything for ourselves. It’s crucial to realize you’re not the only one fearing this display of tongue-tiedness, that confidence comes only with practice – and that it’s OK to be confident. If you can’t talk about your own work with conviction, who’s going to want to hear about it?

The unexpected bonus of the process was hearing my peers describe their work. The Intensive brought together 24 women-helmed projects – 12 fiction and 12 documentary – and I was enthralled by the range of subject matter and the sheer nerve of other women trying to pull off their mad dreams. These projects sounded fantastic! So why weren’t they already streaming on my phone? Why were they still seeking a foothold three, four years in?

Over the next two days, we’d be told that the biggest hurdles facing women filmmakers are partly cultural and partly structural. The cultural part we have the power to fix ourselves (if you need a shot of vodka before pitching, please just do it). A goal of the conference was to help counter the systemic gaps: knowledge and access (the Intensive culminated with one-on-one industry meetings tailored to each project).

I found the 90-minute panel “Finance 2017: The New World” led by WIF board president (and very forceful speaker) Cathy Schulman bracingly frank ($1MM movies are a tougher sell than $40MM movies! Studios are seeking stories with strong female leads! Get yourself a seasoned producer!). I only wished the discussion was twice as long and that I’d heard it all at film school. But of course, the panel’s point was that the media landscape has shifted considerably in recent years – with streaming services becoming adventurous funding giants and traditional studios becoming more risk-averse. And things continue to shift.

The one empowering thing through the noise: Content is power. If you’re a storyteller, there are more avenues than ever today – so long as you’re nimble about the running length or size of screen through which your story can be told: feature film, series, limited series… In other words, one has to learn to be a storytelling ninja in this gladiatorial battle for the world’s eyeballs.

That’s a tall order, all right, but the first step is ours to take: the willingness to talk about our work (as boldly as the boys we keep reading about who get handed tentpole franchises as their second film). To win audiences’ eyes, we must first conquer the gatekeepers’ ears.

As indie filmmakers, we thrive on working small and fast. So who’s to say we can’t be ninjas?

Sandi Tan was a recipient of a 2015 Sundance Institute Documentary Film Grant and is currently in post-production on Shirkers, her hybrid documentary feature about a lost film that has been described (by somebody other than herself) as “a punk rock fairy tale.”