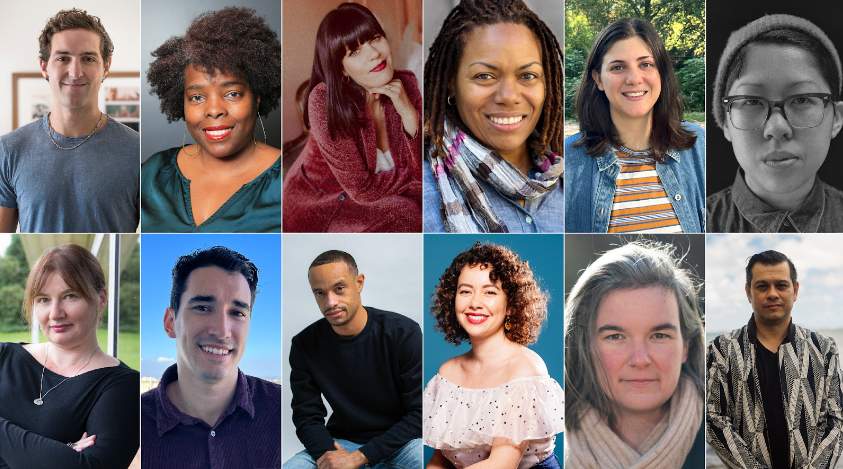 By Shira Rockowitz and Kristin Feeley

We’re delighted to announce the 12 fellows selected to participate in the second edition of the Sundance Institute Producers Intensive, taking place online October 26-27, 2022.

The Producers Intensive is a collaboration between the Sundance Documentary Film and Feature Film Programs that reflects a long-standing commitment to increase support for independent producers. The Intensive provides creative, strategic and professional development support for early career fiction and nonfiction producers from traditionally underrepresented communities who are poised to take the next step in their filmmaking career. The two-day program features group sessions and round table conversations on topics including the producer/director collaboration, pitching, legal & business affairs, packaging and financing, and budgeting. It will be supplemented by a Sundance Collab self-guided curriculum and a legal workshop in partnership with the Cardozo Law School’s Filmmakers Legal Clinic.

Drew Dickler (Producer) with What Will I Become?: What Will I Become? weaves together the stories of two trans boys who died by suicide and examples of trans masculine+ community surviving the suppression and isolation that comes with binary masculinity, offering resources and imagination for a way forward.

Drew Dickler is a documentary filmmaker and producer. Her first feature, Fireboys, premiered at Dances With Films in 2021 and is streaming on HBO Max. Drew is the co-founder of Deep Dive Films, an award-winning production company that produces commercial work alongside independent feature documentaries.

Tiffany Fisher-Love (Producer) with Storming: A family hangs in limbo, caring for their comatose son who may never wake. Love and denial blur as seasons circle. A meditation on time, acceptance, grief— and letting go.

Tiffany Fisher-Love – Current work includes feature documentary Storming, and feature narrative, Hawaiian Vacation. She was the Co-Producer for Boycott, and United Skates. She also produced award-winning shorts: Barista, Daniel, #Goinghomeless, and The Call. With a decade of experience in digital media, she seeks to distribute impactful content at scale.

Anjanette Levert (Producer) with The Only Doctor: For over 15 years, Dr. Karen Kinsell has been the only doctor in rural Clay County, Georgia. Near 65, she considers retirement, forcing the community to grapple with its healthcare future. After several options, a possibility emerges, but so does the pandemic creating disappointment, opportunity and an urgency to live.

Anjanette Levert is a documentary filmmaker, producer, programmer, curator and consultant. She is a professor at Spelman College and directs the Documentary Film Program. This year she is the recipient of the 2022-2023 Presidential Teaching Award. She is the Producer of The Only Doctor by Matthew Hashiguchi and is in post-production on a short film about Mobile, Alabama’s Mardi Gras.

Tracy Nguyen-Chung (Producer) with Fruit of Soil: The soil in Portland, Oregon is rich with a hidden history — what has grown here is rooted in racism, erasure, and neglect. Yet, a small group of Black farmers is thriving and reconnecting with ancestral knowledge and legacy. And through that soil, reclaiming space and nourishing each other.

Tracy is a strategist, storyteller, and organizer whose work spans the documentary, commercial and branded, environmental, and communications fields. Her most recent work explores abolition through an environmental justice lens. Tracy is a Brown Girls Doc Mafia board member and the founder of Brown Folks Fishing.

Debra Wilson (Producer) with Coach Emily: Emily Taylor is a queer Black rock climber who coaches young girls of color to find their place in the outdoors as they experience discrimination in the climbing world.

Debra is an award-winning director and producer. Her most recent films are The Lucky Ones and The Lake Merritt Monster. She was a 2015 BAVC National MediaMaker Fellow and a 2017 SF FilmHouse Resident. Debra was a Location Manager for over ten years and won the COLA for Fruitvale Station.

Gerard Elmore (Producer) with Last Hawaiian Sugar: Set in 2016, during the final days of ‘Big Sugar’ production in Hawai’i, fifteen year-old Nua escapes abuse at the shelter she’s placed in by her well-meaning but troubled social worker, sending him on a desperate hunt to find her in the paradise lost of Waikiki.

Gerard Elmore is a creative producer/director/editor/cinematographer. He is currently vice president of film at NMG Network where he is responsible for developing the company’s branded content, editorial videos, commercials, music videos and films. Elmore also serves as executive director of the Hawaiian artist collective, ‘Ohina Films.

Brian Grigsby (Producer) with Happy Sabbath: In dire financial straits and in search of a handout, a young man reconnects with his estranged mother only to learn family secrets that rock everything he knows to be true.

Brian Grigsby is a Pittsburgh-raised, Los Angeles-based producer. He was nominated for a NAACP Image Award for his short film Blackout and has produced projects for the NFL, NBA, HBO, and NBC, among others. His company, Nelson Studios, specializes in narrative content that enhances unheard voices and inspires audiences through stories of perseverance, redemption and faith.

Jose Jimenez & Savana Vagueiro da Fonseca (Producers) with Red Halo: A millennial Dominican-American visual artist explores a cutting edge technology that allows her to see through the eyes of others, and connects with a Dominican man suffering from a terminal illness. When the lines between their realities blur, she sets out to find him in the real world.

Dominican born and raised, Jose Jimenez is a UCLA MFA Producers Program graduate with a BS in business and entertainment from American University. Prior to his career in film, Jose worked in the energy sector at Dominican Republic’s largest electric power company. He has since worked as a production assistant on numerous independent Spanish-language films. Jose seeks to tell stories that promote Latinx crew and talent participation in Hollywood.

From the Brazilian Amazonia, Savana Vagueiro da Fonseca is an award-winning creative producer based in Los Angeles. Her film and TV projects center Latine characters who find healing in unexpected ways. She holds an MFA from UCLA’s Producers Program and is a Warner Bros. Discovery Access Fellow.

Noor Lawson (Producer) with Gaslite: Finding herself bereft of choice, a desperate young woman robs a gas station in the middle of the desert.

Noor Lawson is a British film and television producer. Since moving to the U.S., she has spent four years honing her development skills as Bryan Cranston’s executive, most recently associate producing the Showtime series, Your Honor. Lawson has also worked on studio features with Heyday Films, StudioCanal, Netflix, Disney, and Paramount+.

Ali Salem & Ioana Uricaru (Producers) with The Swim Lesson: Mara James postponed her career to raise her daughters, allowing her husband to become a professor at an elite college. After discovering he hid a sexual misconduct complaint from a student, Mara develops a secret friendship with his accuser. Inevitably, Mara’s secret is uncovered, threatening to unravel her family, jeopardizing her career, and making her question her own identity.

Ali Salem is Director of Growth Strategy at HBO Max. Previously, he marketed 40+ films at Legendary Pictures and WB. Ali created It Will Be The Past, which won ‘Most-Innovative Short’ at the Vermont International Film Festival. He started his career with internships at Killer Films, Cinetic Media, and Animal Kingdom.

Ioana Uricaru is a Romanian-American filmmaker who writes, directs and now produces films about female protagonists, the immigrant experience and new perspectives on history. Her work has screened in official selection at the Cannes, Sundance, Berlin, Tribeca and AFI film festivals. She is also an Independent Spirit Award nominee.