Announcing the 2014 Sloan Commissioning Grantee, and a Call For Science-Themed Submissions 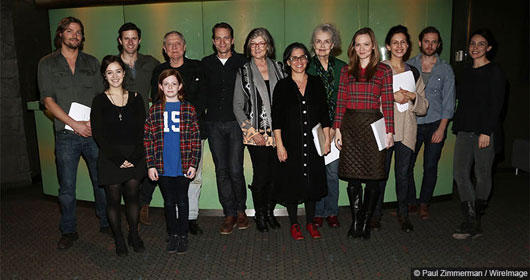 Each year, as part of our long-running partnership with the Alfred P. Sloan Foundation, Sundance Institute searches for promising and compelling scripts that have science and/or technology themes woven into their stories. As a result, each year I get to read some of the most unique stories illuminating all different aspects of science – both historical and contemporary – that are mind boggling, inspiring, and down right fascinating. From ornothology and entomology, to archaeology and cartography, the possibilities and imaginations creating characters and stories in these arenas are endless and inspiring. This year was no different, and I’m very excited to announce this year’s Sundance/Sloan Commissioning Grantee:  screenwriter David Schwab with Francis Turnbull.

The year is 1963 and 15-year-old Francis Turnbull is the size of an 8-year-old and none of his doctors can explain why. His parents’ marriage is imploding, his younger brother Eugene is turning into a petty thief and arsonist, and Francis has just learned of a new experimental drug trial that could make him grow more than a foot. To participate, all he has to do is collect 365 fresh human pituitary glands.

David Schwab has written a number of historical dramas including Mr. Verner’s Pygmy for Paramount Pictures, a true story about Ota Benga, the Mbuti Pygmy, exhibited at the Bronx Zoo. Other screenplays include Ko’olau, for Warner Brothers and Fogmound for Animal Logic. He is a graduate of the Columbia University Graduate Film Program where he now teaches screenwriting.

In addition to receiving a $25,000 grant to support the continued development of his screenplay and research with science advisors, David will also be part of our year-round project support continuum that provides customized tactical and creative support from script to screen.  What exactly is “project support continuum,” you ask? It often includes giving feedback on subsequent drafts of the script, working with the film’s team to share ideas for potential financiers or to make introductions to collaborators like cinematographers and editors, and, in post-production, looking at rough cuts for feedback. It all depends on the project’s needs, but ultimately the true engine behind making the film is the filmmaking team itself, and we want to find the right ways we can support both the vision and strategic steps in making it come to fruition.

Over the past few years, it’s been exciting to see prior projects supported through the Sloan partnership move forward. This year saw the release of Rob Meyer’s A Birder’s Guide to Everything starring Sir Ben Kingsley along with a host of young actors including Kodi Smit-McPhee, described by the RogerEbert.com reviewer as “[Using] birding as the launching point for a tender and gentle coming-of-age story, as well as a meditation on grief and letting go. It is also that very rare thing, a movie about teenagers where the characters actually seem like real teenagers, as opposed to mini posing adults. “

We also had an opportunity to mount a staged screenplay reading of Prodigal Summer, which is being directed by Nicole Kassell and co-written by Nicole and Barbara Kingsolver as an adaptation of Kingsolver’s eponymous novel. The reading was an opportunity for Nicole and Barbara, as well as their producers, to put the screenplay on its feet and hear how the dialogue, pace, and overall script were working out loud. From there, the project’s creative team is currently casting and putting financing in place to shoot the film.

We feel privileged to bring David Schwab and Francis Turnbull into this group of amazing projects supported through the Sloan partnership. And, in that spirit, we’re just about to launch the latest Call for Submissions for the next round of the Sundance/Sloan Commissioning Grant and Fellowship and encourage you to share the news with any filmmakers that might have something to submit. I can’t wait to be immersed in even more stories that embrace and celebrate science and technology as an unshakeable part of humanity. As the Sir Ben Kingsley character in A Birder’s Guide to Everything says, “There’s nothing like the feeling of discovery.”

For more information on applying to the Sundance/Sloan Commissioning Grant and Fellowship, please click here.