Animated Shorts Cover the Angry, the Disenfranchised, the Hungry 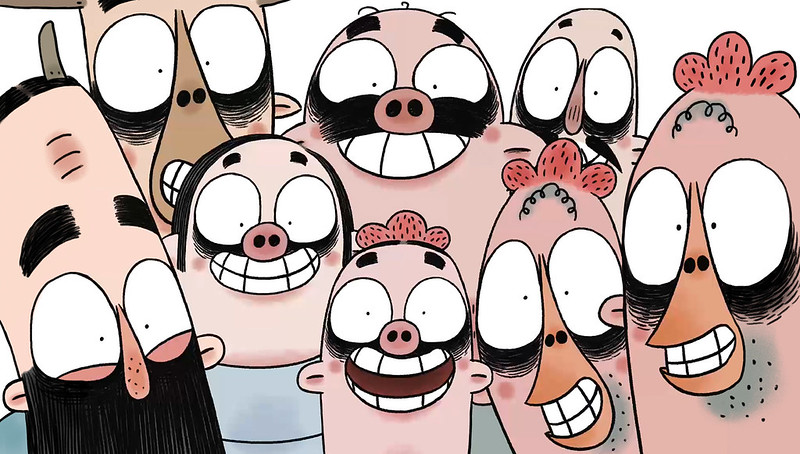 The Short Film Program, says longtime volunteer Nori Huntsman, of West Valley City, Utah, is her favorite part of the Sundance Film Festival. The shorts give you an idea of what the filmmaker is going to do with the rest of their career, she says.

That has long been a highlight of the Festival. Here, among the 60 or so short films screened each year, the seedlings sprout.

The filmmakers of the future dwell here. So, with that thought in mind, we tried out a sampling of animated films in the lineup, with an eye toward recording the names of the storytellers representing the next generation.

We Are Here — Amid a tangle of somewhat angry lines and colorful, morphing shapes, dreamers, brought to America by their immigrant parents and granted deferred deportation, recount their invisibility and their stories. They tell of being denied scholarships because of lacking a Social Security number, working at a carnival for $5 an hour, and the trauma of men in riot gear taking away their father. “Do the right thing,” the dreamer tearfully remembers her father saying to her. “And I’ve been trying to do that.” Directors: Doménica Castro, Constanza Castro

Meal on the Plate — The saying goes: You are what you eat. That seems to be true here, where the people of the village grow pig noses, fish tails, and rooster combs. When an outsider shows them to eat plants, hilarious chaos ensues. What you should eat and what you desire to eat are often vastly different things. Director-writer: Chenglin Xie.

Night Bus — The last bus of the night carries a married pregnant couple, two tired miners, a grouchy old lady, a single man who helps the crotchety one with her luggage, and the driver. Things are bound to go awry. Watch out for the Mama monkey and her baby. Suspense and black humor abound. Director-writer: Joe Hsieh.

THE FOURTH WALL — A stuttering child plays in the kitchen with a ball and his imagination, turning Mom into a washing machine who pops a baby out with the laundry and Dad into a fridge. The black-and-white tile floor becomes a chessboard. A broken egg becomes the sun, and the broken dishes frame out a mountain. How can he stop his stuttering? Maybe if he eats pigeon eggs, but, if he doesn’t, the eggs turn into birds. And the water dripping from the faucet stutters too. Director-screenwriter: Mahboobeh Kalaee.

Bestia — Porcelain-doll-style characters and a dog-loving ― well, maybe not — Chilean secret police agent propel the story. Violence, evil, and sexuality lurk here. The technique is stop-motion animation, and the director says in his Meet the Artist video that he chose the porcelain look because it revealed no emotion. Director: Hugo Covarrubias. Screenwriters: Martín Erazo, Hugo Covarrubias.

the HORK — When demons and goddesses meet, as in this story, will the goddesses always win? The director says she imagined a world where undiscovered and unrecognized women become rulers over all. Director: Nicole Elizabeth Stafford

Swallow the Universe — Flaming turtles, ferocious tigers, a background of Mickey Mouse faces, and a lost child in the jungle. The world is mean and meaningless. In his Meet the Artist video, filmmaker Nieto says his film is about “barbarianism, formlessness, emptiness, and ugliness.” “Banzai!” he wishes. Director-writer: Nieto.