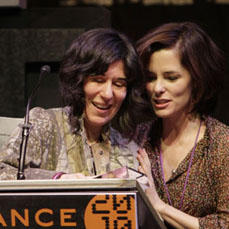 Thirty-four films were awarded prizes in 29 categories, honoring both veteran and first-time filmmakers from the U.S. to Spain, Cambodia, and beyond.

First-year Festival director John Cooper had branded the 2010 Festival a reboot, calling for a return to the Festival’s rebellious roots, and the diversity of tonight’s winners would seem to move toward satisfying that mission and complicate received notions of the homogenous “Sundance film.”

As he did throughout the week, Cooper brought a free-spirited levity to the ceremony. He joined Master of Ceremonies David Hyde Pierce onstage for a cheeky Festival name-check to the tune of the Black Eyed Peas’ “Boom Boom Pow.” “I’m on the Skateland boom, y’all hear the Space Tourists zoom,” Pierce rapped. “When I step inside the room, I make James Franco swoon.” When the mugging was over, Pierce dead-panned that the Festival founder was to blame. “It was Redford’s idea,” he said.

Presenting the Grand Jury Prize: Dramatic, actress and juror Parker Posey effused over Winter’s Bone. “If it doesn’t get attention and respect I’m going to stab myself,” she said. “We gotta support movies like this.” Earlier in the evening, writer-director Debra Granik and her co-screenwriter Anne Rosellini took home the Waldo Salt Screenwriting Award. And even earlier in the day, Winter’s Bone was acquired for U.S. Distribution by Roadside Attractions.

Accepting the Grand Jury Prize: Documentary for Restrepo, veteran journalists and first-time filmmakers Sebastian Junger and Tim Hetherington honored both their immediate subjects – the soldiers they filmed in Afghanistan’s Korengal Valley – and others who’ve fought overseas. “I’d like to dedicate the prize to the Restrepo generation,” Hetherington said, “and to the hundreds of thousands of men and women who come back after serving this country and are invisible.”

Mads Brügger, whose daring satire The Red Chapel won the World Cinema Jury Prize: Documentary, introduced his film’s stars as, “the Laurel and Hardy of Danish-Korean comedians.” Simon Jul Jørgensen, the straight man of the duo, spoke of the impact that a film like Brügger’s can have. “Weapons are not the most powerful and fearsome weapons in the world,” he said. “It’s humor.”

Comedian Louis C.K., whose film Louis C.K.: Hilarious screened out of competition at this year’s Festival, was on hand to introduce presenters for the audience awards. He joked that it was irresponsible for people to pay for movies in such a dire economy, but also made a frank recommendation to Hollywood. “Everybody hates all movies that they pay to see,” he said. “If you replaced them with movies from the Sundance Film Festival, people would love them.”

Josh Radnor, writer-director for Audience Award: Dramatic winner Happythankyoumoreplease, countered the perception that his charming crowd-pleaser didn’t fit into the Festival’s call for a “cinematic rebellion.” “I think it is rebellious,” he said, “because it’s about people saying no to cynicism, and saying yes to love.”

Sounding genuinely surprised and humbled, veteran actor Mark Ruffalo took the stage to accept a Special Jury Prize: Dramatic for his debut film, Sympathy for Delicious. “I am so proud to be out here with all these filmmakers,” he said. “This is a place where we can be free. In a world that’s printed on dollar bills, we get to come here and do something that’s a little bit outside of the norm.”

3 Backyards filmmaker Eric Mendelsohn won the unofficial prize for longest speech of the night. Returning to win the same directing prize he’d won 11 years prior for Judy Berlin, Mendelsohn thanked his cast and crew, his students and colleagues at Columbia University, his “countrymen” in the film industry, and the rejuvenated Festival. “In my mind Robert Redford is single-handedly doing what other governments do for filmmakers,” he said. “Also, my mother would want to say that ever since The Way We Were, he can do no wrong.” Before the stage was dismantled to make way for a celebratory dance party, Pierce concluded the ceremony with a simple exhortation. “Keep questioning,” he said. “Keep making films that speak to us.”

Best of NEXT – Todd Barnes and Brad Barnes, Homewrecker

Awards for film in the Shorts program were presented at a separate ceremony on Tuesday night. The winners: