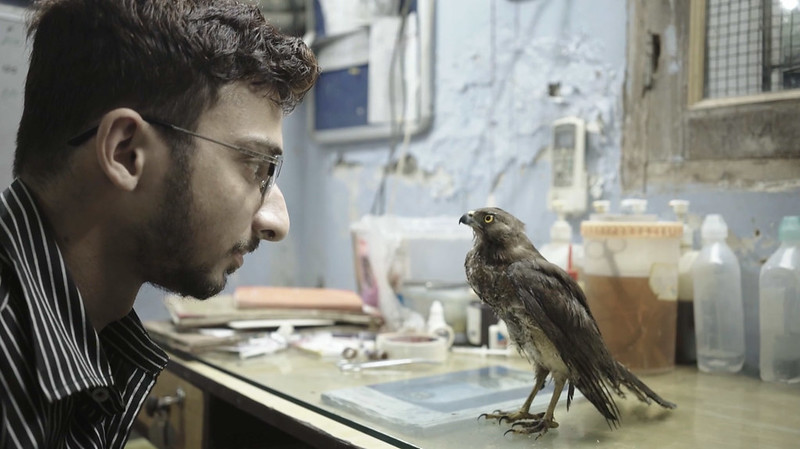 Salik Rehman appears in All That Breathes by Shaunak Sen.

A poetic tribute to a New Delhi family that has devoted its life to rescuing black kites that fall wounded from the sky, All That Breathes was honored Friday as the winner of the World Documentary Grand Jury Prize at the 2022 Sundance Film Festival.

Every morning, Salik combs the bustling city under its ever-gray polluted skies and collects injured birds — in ever-increasing numbers — to deliver to his cousins, Saud and Nadeem. In a dark, almost claustrophobic space in a cluttered basement garage, Saud examines a medium-sized brown bird with intelligent eyes and the hooked beak of a raptor.

It is a male, Saud announces, and he can tell that it has been sitting on eggs to keep them warm. We must release him as soon as possible, says Saud, so he can return to his family obligation.

Nadeem and Saud learned about skeletal and muscle structure and the like from being teenage bodybuilders. They learned about caring for “all that breathes” from their mother.

When they were young, Saud and Nadeem remember their relatives throwing meat to the black kites that dominated their skies. Muslim belief holds that feeding the kites earns religious credit. As he explained in a Q&A following the Festival screening, Nadeem also learned that the kites have no natural predator. So, when they are hurt, “their end is very slow and painful.”

Director Shaunak Sen, too, had observed the complexity of life in New Delhi — the cows in the streets, the rats in empty lots, the converging of animal and human life in urban environs. “I was interested in doing something, very vaguely, with birds and the polluted skies and human beings who reflect on these triads differently.” But he didn’t want to make a nature documentary.

When he read a newspaper article about the brothers, he knew he had the emotional anchor of his story. He found the brothers in the basement with huge, heavy cutting machines and other equipment for producing their soap dispensers. “Right next to it, you have these incredibly vulnerable yet (majestic) otherworldly beings, in the black space being treated,” Sen says.

The documentary focuses on the family, which has been operating the rescue for decades with the help of donations and other funding sources, and then lyrically pans out for sweeping shots of the sky and cityscape. “I had to keep moving from compression to full decompression,” Sen explains.

When political and religious unrest broke out in the form of protests in New Delhi, Sen resolved to keep to his original story, to let that turbulence “leak in” to the narrative but no further.

From there, it was a matter of patience — waiting for moments to happen, as when a kite sweeps by Salik and steals his glasses. The brothers repeatedly noticed cigarette butts in the cages of the recovering kites, which they concluded the birds collected as sort of an insect repellent.

Just as songbirds developed a higher pitch to be heard above the noise of the city, the kites were experimenting, perhaps evolving, as well.

Sen hopes his film inspires audiences to feel a kinship with the black kites and their bird relatives. “I want audiences to leave the theater and immediately look up,” he says.