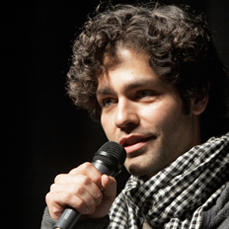 Adrian Grenier, the charming and exceptionally photogenic leading man on HBO’s Entourage, has made a living both on and off the screen as a paparazzi darling. But after being accosted and admittedly bemused by the relentless camera of 13-year-old Austin Visschedyk, Grenier decided to turn the tables on the star-shooting youth and find out what makes a true paparazzo click. His second documentary, Teenage Paparazzo, was the result, and even Grenier was surprised by the journey he and Austin took together. The film premiered at the Festival on Friday evening. After the screening, Grenier and Visschedyk took part in a Q&A.

What did you learn from your first documentary [2002’s Shot in the Dark] that you took into your second?

Grenier: It’s a very difficult process. In essence you’re learning as you go and you’re figuring out what the story is, even to the very end. It’s about perseverance and keeping an open mind and heart to what it is that you’re learning as opposed to trying to dictate. I think some documentaries already have that pre-established idea of what that will be and then they go out and try to seek the footage and almost force people into that format. I prefer to jump in headfirst and be in total chaos and let it speak to me.

How did this make you reevaluate your own lifestyle and career?

Grenier: Well it’s a little risky, isn’t it? The irony is “don’t look just at me, look for something more meaningful.” But at the same time I kind of need you to look at me! And this movie isn’t finished. I invite you all to remix it one day and make your own and talk back. This was my way of opening up the conversation. With the paparazzi it’s often a one-way street where they’re coming at you and they dictate everything, but I was inspired by Austin and was empowered to take the camera, go out, and do it myself.

For Austin­­—how old are you now and have your plans changed since the end of this movie? You said at the end that you still wanted to shoot celebrities but not as a paparazzo…

Visschedyk: I’m 16 now, and my views on what I said at the end of the movie, they’re still intact. I’d still like to go to a great college and get hired by a reputable magazine and start shooting professional photography.

Q: In the movie you spoke about how it was difficult back in the day to reach celebrities. Do you think it’ll ever revert back to the way it was?

Grenier: It’s interesting—you see paparazzi more becoming the performers, prodding you for reaction. They come up asking questions and talking to you, and their personalities are somewhat part of that whole exchange. So it’s definitely changing; I don’t know what it’s going to become, but to me, this is a big fat kiss to the paparazzi, and I want to say, “Hey, guys, right back at you!”