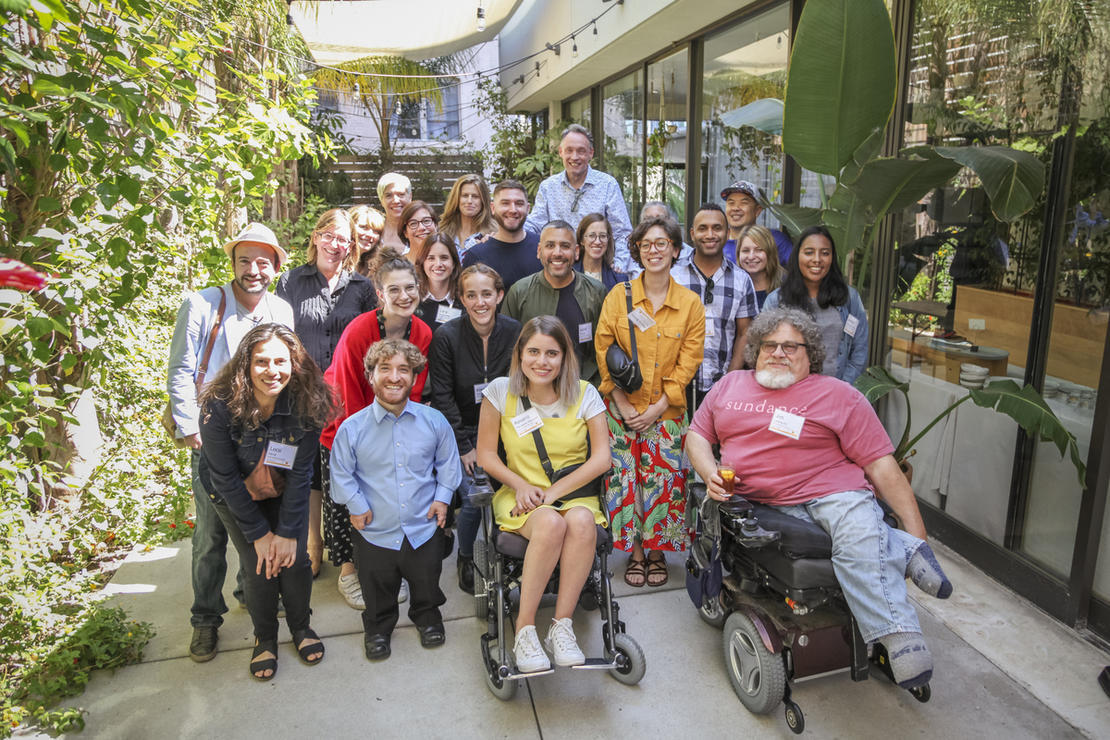 Twenty-five percent of Americans live with disabilities, yet when disability is portrayed on-screen, Hollywood often misses the mark. “I loathe ‘overcoming disability’ storylines,” visual artist and filmmaker Alison O’Daniel, who is also hard of hearing, told us at Sundance Institute’s recent Impact Intensive, underscoring the importance of empowering artists with disabilities to tell their own stories.

With the launch of our Outreach & Inclusion and Impact, Engagement and Advocacy programs at Sundance Institute, we’ve collaborated in the field to convene and support artists with disabilities whose creative practice and work explores access, justice, neurodiversity, sound, and vision. Our inaugural Impact Intensive did just this, workshopping strategic outreach and engagement campaigns for projects by artists with disabilities.

During the Impact Intensive, we talked to O’Daniel and three other artists with disabilities—writer, producer, and actor Josh Feldman; director, producer, and writer Rodney Evans; and BBDO LA producer and advocate Storm Smith—about their work and about their vision for making the film industry more accessible. Here’s what they had to say.

How is your cinematic language shaped by (or not shaped by) your disability?

Josh Feldman: My cinematic language is very much shaped by my disability because I am so visual—everything about the world, to me, is delivered almost exclusively through sight. So whether it’s through sight or feeling (vibrations, for example), that’s how I experience the world. It very much influences how I envision my projects and how I write my screenplays, as I always see everything in the story first via images before I put anything down on the page in words.

Rodney Evans: In terms of the visual perspective, since I experience the world as what is generally termed tunnel vision (i.e., no peripheral vision but strong central vision), we used matting techniques so that the viewer gets to live inside that experience with everything that is not in the center of the frame falling into black. What gets missed, and what in turn can you focus on? I’m interested in using techniques like flares, colorful rollouts, light reflected through cracked prisms of glass to bring the audience deeper inside the visual experience of the artists in the film.

How do you hope to see people with disabilities represented on screen in the next five years?

RE: I hope to see characters with disabilities move to the center of the narrative in both fiction and documentary. I think filmmakers with disabilities should be at the front of the line for directing those films from a place of authenticity, nuance, and lived experience. The dancer/choreographer in VISION PORTRAITS, Kayla Hamilton, said at a Q&A recently that she would not have participated in the documentary if I wasn’t directing it. I think that points to trust, respect, and vulnerability that comes from a place of shared experience.

What does an accessible future look like to you?

JF: An accessible future to me is one in which people realize that they share life with people with disabilities, whether it’s at Starbucks or in a restaurant or at the movie theater. When I go out into the world each day, I often encounter people who either don’t know how to interact with a deaf person or are ill-prepared to. I’m sure people with different disabilities feel the same, so it really is upon each and every one of us to become more educated.

Alison O’Daniel: I also want to see people with disabilities offering expertise on how to change all structures that reinforce ableist experiences, from the life-threatening (like inequitable healthcare) to the everyday (such as the height of artworks hung in museums and awkward, albeit well-intentioned caption devices that fit into drink cups in movie theaters). Most of all, I really want an intersectional awareness to overcome everyone everywhere, not just in film. I continue to see support and awareness of disability fall to the wayside from well-meaning people or organizations. The invisibility has to end.

Storm Smith: An accessible future looks like this: When people with disabilities walk into a space in any industry and are ready to work, all types of accommodations are already available to us, rather than having to constantly fight to get what we need. The key is to be proactive … because accessibility is a human right; it’s not a burden.

RE: An accessible future looks like a place where filmmakers have access to the financial resources and means to tell stories about our lives and experiences. The hope is that enough of us are able to complete films that center characters with disabilities that they will reflect the fact that one in four people in the USA has a disability.

What can the public do to support disability justice and the arts?

AO: What I contribute as an artist with a disability is a hopeful, brave, demanding, and imaginative view of the future. This is what society can learn from artists with disabilities and from organizations that support artists with disabilities. We have a vision for an inclusive future that I want so badly to shape and alter the norm. In the past few years, I’ve become much more empowered and able to ask for what I need, and time and time again, I’ve realized that when I advocate for myself, so many other people with or without disabilities benefit.

SS: We have approximately 40 million people with disabilities in the U.S. [and] two billion people with disabilities worldwide. [Disabled people] are at the bottom of the barrel, which leads to an untapped market with purchasing power. When people begin to unlearn and unpack biases, and hold ourselves accountable in this ongoing process, allies can support each other better. Even with the power of social media platforms, films, PSA, arts, and even in the political space for disability rights, that can go a long way.

RE: Artists with disabilities can form coalitions and build bridges among each other so that we speak with a strong, clear, unified voice. The general public could lobby Congress to mandate that part of the government funds that go to the Corporation for Public Broadcasting go to an organization created and dedicated to telling stories about characters living with disabilities. This would be akin to organizations like Black Public Media, Latino Public Broadcasting, and the Center for Asian American Media. One in four people in the U.S. live with a disability, making us the largest minority in the country, yet less than 2% of characters in film and TV are shown as living with a disability … Arts foundations can ask themselves deep questions about what they are doing to prioritize disability justice to make these necessary changes our new reality.

How does your current project fit into the conversation around disability justice?

JF: My current project—a feature about what happens when a deaf man and his husband adopt a child—shines a light on an issue that I feel can be exclusive and restricted to members of the LGBTQ+ disabled community. As a gay man, having a child doesn’t happen by mistake; it’s very intentional, whichever path you take. When you add being deaf into the mix, that makes for what are often unique situations.

AO: The Tuba Thieves is a hybrid project composed of documentary, experiential sensory narratives, and historical concert re-enactments that addresses different audience through reprioritized and shifted experiences of sound, visuals, and captions. The Tuba Thieves reverses the standard process of filmmaking so that listening and lived experiences of hearing shape the working process and production.

RE: VISION PORTRAITS is a feature documentary that chronicles the experiences of blind and low-vision artists, including a photographer (John Dugdale), a dancer (Kayla Hamilton), a writer (Ryan Knighton), and myself (a partially sighted filmmaker) creating work. The film uses the unique capabilities of cinema to put the viewer in the subjective position of the characters so you are able to see from their perspective and get deeper into their experiences.

Interested in seeing what our Outreach & Inclusion team is getting up to at the 2020 Sundance Film Festival? Check out our roundup of events that aim to foster conversation on representation within the industry.