5 Takeaways from the Sundance Institute | Women in Film Financing Intensive 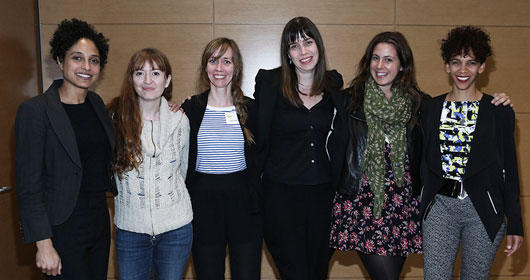 Money may not be the root of all evil, but it’s certainly a root cause of one: holding back women filmmakers. Financing was the most frequently cited barrier for female directors and producers of independent films, according to a 2012 study commissioned by Sundance Institute and Women in Film (WIF) Los Angeles.

That was only the beginning, though, as the two organizations geared up to find practical solutions to the problems the study revealed. One result: a lively, energetic, richly informative Financing Intensive held in New York for an invited group of 64 women filmmakers in early to mid-career. The day-long event, part of Sundance Institute and Women in Film LA ‘s Women Filmmakers Initiative and presented by Morgan Stanley, brought directors and producers together with speakers and panelists from the film industry and the financial world, united by a purpose they care about deeply: giving women filmmakers the information (sometimes hard to find) and the specific tools they need to overcome those financial barriers.

As Keri Putnam, executive director of Sundance Institute, said in her opening remarks, “knowledge of, access to, and confidence in financing” were the major obstacles the study cited, and “we’re here because we want to fix the gender inequality in film.”

In her welcoming remarks, Cathy Schulman, president of WIF LA and of Mandalay Pictures, noted that films with women at the center have huge audiences. “I want to arm everyone with data we can use to show financiers, buyers, and skeptics that films of all genres with satisfying female storylines and characters actually make money,” Schulman said.

Putnam and Schulman set the positive, practical tone that ran through a day full of honest conversation, hard numbers, and detailed advice from industry leaders. As the day started, each woman stood and introduced herself; some were well-known figures in the indie world, others emerging directors and producers. Each one exuded unmistakable enthusiasm, in a room full of confidence that women can and will find ways to banish that inequality.

Everyone can benefit from the day’s shared experience. Here are the Top 5 Takeaways, up-to-the-minute tips for women filmmakers at any stage of their careers.

We all like to think that our work stands on its merits, but as Carla Harris, Vice Chairman, Global Wealth Management, Managing Director and Senior Client Advisor of Morgan Stanley, bracingly put it: “The work doesn’t talk!” Throughout the day, all roads led back to one crucial piece of advice: you have to keep networking. “Competence gets you noticed,” Harris said, “but to sustain a career you have to cultivate a broad and deep web of people who can give you access to funders and information.

“Include men as well as women in your network, and overlook no one.” Harris’s intern once knew someone Harris was trying to reach who helped her make that fruitful connection. “Find a mentor who can give you advice and a sponsor who can speak up for you in the financial world, but don’t confuse the two. A mentor is a friendly advisor who can listen to your insecurities; a sponsor is a business contact who must hear only the confident you.”

Ask for 30 percent more. Women usually ask for 30 percent less than men, according to data cited by Sara Laschever, the author of Women Don’t Ask (which is among Fortune magazine’s 75th anniversary list of “The 75 Smartest Books We Know”). “If you ask for 30 percent more than you’d planned, there’s a good chance you’ll come out 10 percent ahead. Do your research thoroughly before any meeting so you know what’s standard for comparable projects; justify the amount you’re asking for with numbers. And assume everything is negotiable. If someone says ‘No,’ ask ‘Why?’ because there may be an obstacle you can overcome, or a compromise that makes a deal possible. That may sound daunting, but negotiating is a skill that can be learned.”

3. Know The Rules Of Financing

You can’t negotiate well if you don’t know the value of your film in the marketplace, so educate yourself. Your production budget should break down the sources of income (grants, loans, tax rebates or credits). You should estimate what your likely revenue will be (domestic and foreign sales, VOD), as well as how and when loans will be repaid and revenue divided. A film that sells for $1 million doesn’t mean $1 million in the producer’s pocket. Know that a distributor gets a premium when revenue comes in, typically 20 percent for features and 15 percent for documentaries. Take into account all expenses, including promotion and outreach if that falls on you. The best source of information: your network. Other filmmakers are willing to share confidential information and financial models they wouldn’t want made public.

Be aware of what investors want. Dan Cogan, of the film financing company Impact Partners, says “…a less expensive film that makes money is preferable to a more expensive film that fails.” He advises asking, “How [inexpensively] can I make the film without compromising what I want it to be?”

4. Those Rules Are Changing, So Be Creative

“In the past, a financial pie might be divided into five pieces of funding,” said the documentary producer Abigail Disney. Today it probably takes 20 sources to make a budget work, so you have to be scrappier, for both documentaries and features.”

“The traditional sources for independent features – foreign sales, pre-sales, DVDs – have been drying up, yet we’re still staring at that corpse,” said Christine Vachon of Killer Films, one of the most successful indie production companies. “To move ahead, think creatively not only about money, but about your project itself, and be bold. In today’s market, it’s not enough for a film to be pretty good,” she said. “It has to be fantastic to break out. It helps if the film is zeitgeisty, so people feel they need to see and talk about it. That’s not pure idealism; it’s your most realistic chance.

“Think about inexpensive moves or workarounds. You might not have money for a trailer to entice investors, but it costs nothing to create a Look Book of images showing what your film will be: the visual style, the costumes, the lighting. (Make it aspirational yet sane; Brad Pitt is probably busy on another project!) If your film is topical, you can exploit educational distribution or arrange screenings that give you a speaker’s fee, income that goes directly to you.”

Sheila Johnson, co-founder of BET, said that while it’s important to be resilient about all the ‘No’s’ you’re sure to get, “it’s just as important to know what to do with a ‘Yes.’” Keep your investors engaged and informed about the progress of your film, and “Don’t treat them like an ATM”; you may need them and their networks again someday.

Remember, as Johnson said, “Money is just a tool, it’s not a talent. You’re the one with the talent. But when you have the tool, you might change the way people see the world.”

The Women Filmmakers Initiative’s “Financing Intensive For Independent Women Filmmakers” was organized by Sundance Institute and Women in Film Los Angeles in response to its landmark study “Exploring Barriers and Opportunities for Independent Women Filmmakers.” More than 15 allied organizations supported the event, held in New York on April 7, 2014, which brought together filmmakers with industry leaders for a day of speakers, workshops, and panels aimed at creating greater financial expertise and sustaining the careers of women in film. The Women Filmmakers Initiative continues to grow based on the priorities uncovered from our research. We’d like to thank Dove, Morgan Stanley, Norlien Foundation, National Endowment for the Arts, The Gruber Family Foundation, J. Manus Foundation, The Harnisch Foundation, and Bhakti Chai for their generous support.