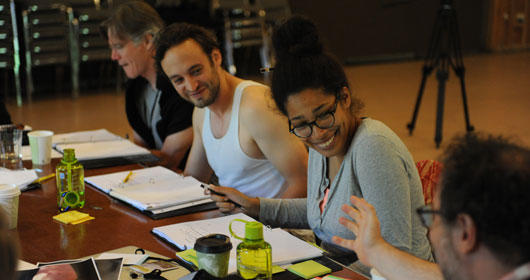 JSD: The play is about the relationship between two women who are linked by the men that are no longer in their lives; the mother of a conceptual artist, and the artist’s girlfriend. The artist’s father has also passed away before the play begins, and the women are both experiencing different forms of grief, and remembering these men in different ways.

To me, the play evolved out of two competing concepts. One, by Roland Barthes’ Camera Lucida, where he describes the action of looking at a picture of his mother after she has passed away, and how the relatively new technology of photography affects memory. The other is thinking about the women who support the artist as he makes the art – the women near the edges of the frame, so to speak.

2. What are some of the more notable creative strides that you feel you’ve made while on the mountain?

JSD: I feel as though I have a much better handle on how the play does, can, and should work. It has been such a blessing to be pushed and challenged and supported by truly talented people, and another blessing to have the luxury of beautiful wide open spaces to go to, to process and integrate all the thoughts and information.

I got to try out a lot of wild stuff – and in some ways I tried to break the play so I could see how it worked. I think the play is more itself now, the characters are fuller and more complex, the relationships are clearer and meatier.

Basically, I think the play is better!

3. Regardless of the work being done, the Sundance Institute Labs tend to provide a sort of safe haven for creativity and experimentation. How do you absorb this experience so that it informs your work moving forward?

JSD: The most beautiful thing to me has been the genuine excitement and support for work that is in process. There is a generosity here, of seeing potential and valuing ambition over product, that I want to allow into my relationship with my own work. I think that being at Sundance has made me braver, as a writer and as a theater artist.

4. Is there any significance to the repetitive title of the play?

JSD: It’s funny – I don’t think of the title as a repetition, but as an emphasis. It’s a strange verbal tic that we do now: “Do you like him, or do you like like him?” “Oh, I’m very very very full.”

5. What has been your greatest creative challenge thus far at the Lab?

JSD: The end of the play! How the play ends! Boy oh boy! Ending a play is kind of a walk in the park…That is actually a mine field. So many ways to do it in a way that…isn’t great.

I came into the Lab with a sense of the kind of energy I wanted to build up over the course of the play, the ideas that I wanted to play with, but I didn’t have a clear sense of where I wanted that energy to go—how I wanted it to resolve.

After three weeks of trying out a bunch of endings in the room and a bunch in my head, I think that I’ve settled on something closer. This feels like a monumental achievement. It also feels as though this creative challenge that isn’t done challenging. It’s very exciting, very fertile.