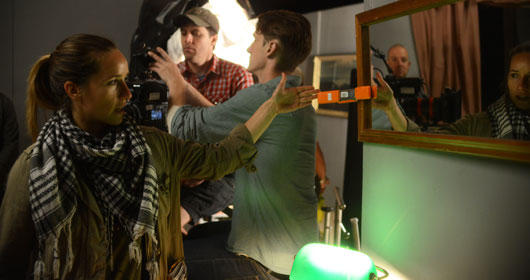 Meredith Danluck at the 2013 Directors Lab. Photo by Jonathan Hickerson.

Meredith Danluck is an artist, filmmaker, and 2013 Sundance Institute Directors and Screenwriters Lab Fellow working on her project State Like Sleep. Earlier this year, she showcased her four-screen film installation North of South, West of East as part of the New Frontier exhibition at the 2013 Sundance Film Festival. Below, Danluck offers up some details about her screenplay that probes the disorienting worlds of deception and loneliness, the perceptive work of the Creative Advisors at the Labs, and how she plans to infuse this experience into her future projects.

You’re here at the Directors Lab with your project State Like Sleep. Can you share a bit about that narrative and origin of the story?

Meredith Danluck: State Like Sleep is a story about people coping with loss, specifically a main character named Katharine, a young woman dealing with the loss of her husband and the impending loss of her mother, who’s in the hospital. That being said, it’s not a total depressing story. There’s kind of three aspects to the story: there’s a love story, a mother-daughter story, and a somewhat mystery thriller unraveling of the past, which is about the loss of her husband.

The genesis of the project was about a year and a half ago my mother went into the hospital in Brussels. She was over there with some friends and got bacterial meningitis and wound up in the hospital for a very long time. So I went over there and there was this kind of isolation of being in a foreign country and also as an adult child dealing with taking care of your parents. Throughout that process I started writing things down—little details of where I was, and scenes that came up.

In addition to that, visiting hours would be over, I would wander around Brussels, and this kind of underbelly of the city started to emerge in my eyes. All of these people who were there on business—traveling alone, eating alone. These ideas started to percolate about where all these people actually go. The loneliness that you can feel in a situation like that is how the story came about.

This is your first feature film, but you were at the 2013 Sundance Film Festival with a New Frontier installation.

MD: Yeah, it was a four-screen feature narrative installation, which is hard to wrap your head around. Basically, there are four feature films that play in perfect symphony on opposing screens. It’s called North of South, West of East. You can see a trailer, which maybe will approximate what it is (laughs).

What are some of the more notable creative strides that you feel you’ve made while at the Lab?

You choose four scenes when you’re here to shoot and edit. Overall, my biggest epiphany moment came at my table reading. We had all these great actors—James Legros, Lindsay Burdge, Anna Gunn. All of a sudden, these characters that you’ve seen on the page start speaking. And I saw Lindsay, who was my actress the entire time we were here, change in the way that she read certain scenes that we had read together. That was my biggest epiphany: seeing how the tone of the movie could expand the tone of an individual scene, and how important that is moving forward.

The Creative Advisors work and visit with all of the Fellows individually. How did some of the Advisors go about adapting to your set and offering insights?

I think that every Advisor has a different entry point into the different sets that are here. Oliver Stapleton, who is a great cinematographer, came on a day that we were working on some visual transitions. He was able to slip in really easily and make some suggestions like, “Oh, if you create some dimension behind this window here by setting a light 20 feet away, it will give you this.” That’s something really practical and easy.

Something a little more abstract is Joan Tewkesbury’s advice on trying to get something out of an actor—I was trying to get someone to speak louder, which seems like a really easy request. And she said, “Have her play it as if she’s deaf in one ear.” All of these conversations weave together into the whole of the experience.

How do you absorb this experience so that it informs your work moving forward?

I think the most important thing is to know the movie you want to make, and have that be so impenetrable that you know what is additive and helpful and you know what doesn’t make sense at all to digest. It’s that simple. The hard part is getting to that point of knowing the movie you want to make. I think that’s what this process is really about—honing in on that and creating that world that is indisputable.