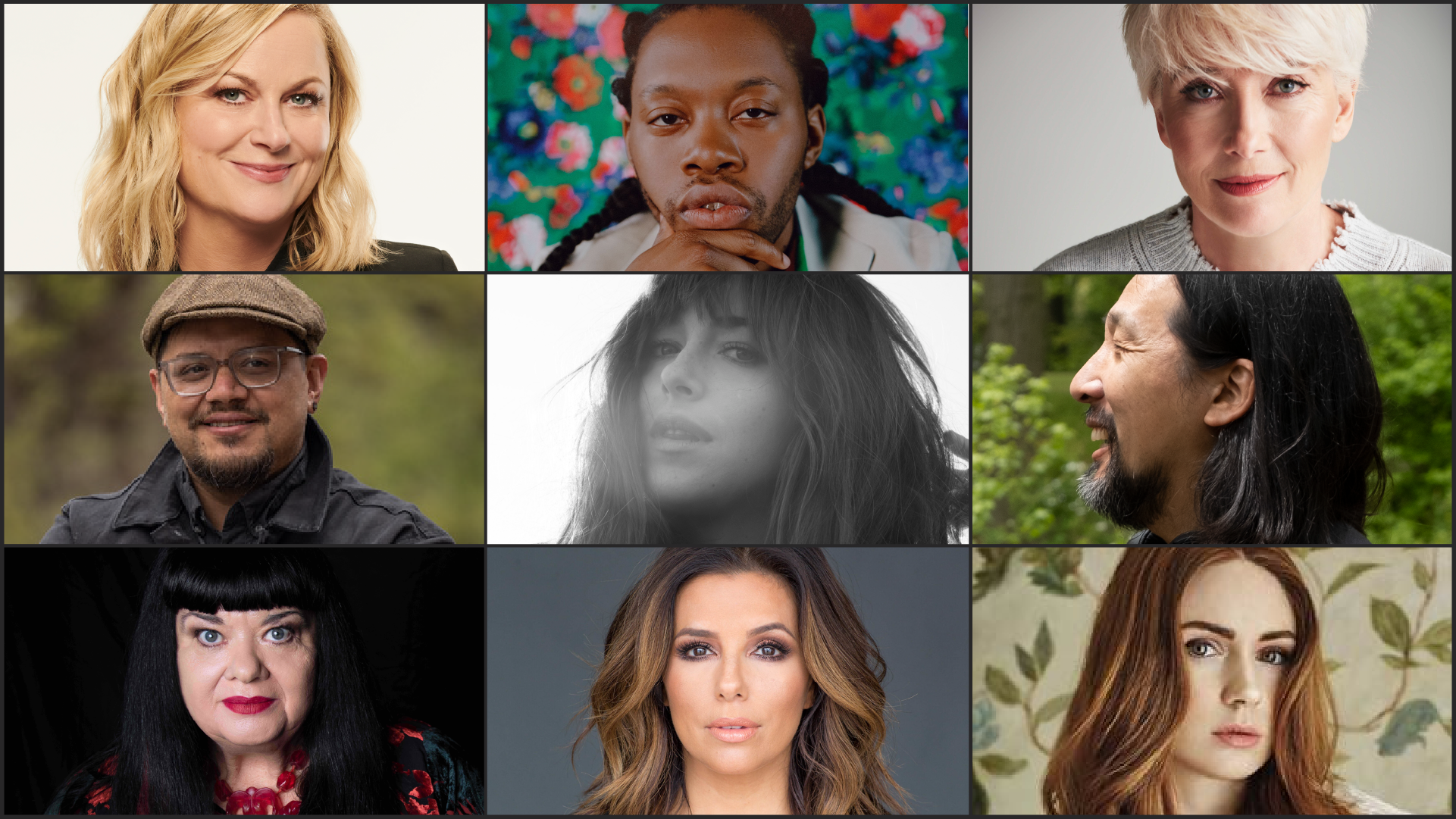 Park City, UT — The nonprofit Sundance Institute announced today the 2022 Sundance Film Festival Beyond Film lineup produced by the Festival, all of which are free to the public. These thought provoking and entertaining talks and events will include three conversation series (Power of Story, Cinema Cafe, and The Big Conversation) and more. The Festival takes place from January 20 – 30, 2022 on an enhanced online platform at Festival.Sundance.org and on New Frontier’s Spaceship, a bespoke immersive platform, and in person at seven Satellite Screens venues around the country during the Festival’s second weekend.

Additional Beyond Film programming includes a daily talk show (“How to Fest: Daily”); a solo performance with multiple Emmy Award–winning artist, Lynette Wallworth; a sneak peek and conversation with the directors of Oscar’s Comeback about black film pioneer, Oscar Micheaux; Artist Spotlights with XR/VR/new media creators showing work in the New Frontier section; a conversation around the climate crisis; and more. In addition to the Sundance programming, our Satellite Screen partners will have conversations (in-person and online) running the last weekend of the Festival (Jan 28 – 30.) The Festival Village also launches today, full of partner–produced cultural programming in our online “main street” and community hub. As part of that, the Sundance ASCAP Music Café will also return for its 24th year.

POWER OF STORY
The Sundance Film Festival’s Power of Story events look to deepen public engagement with the art of storytelling, delve into cinema culture, and celebrate artists whose work propels and reinvents the form as we know it. Presented by Netflix

ARTISTS UNBOUND
Sunday, January 23, 3-4:30 p.m.
Exciting boundaryless artists from a wide cross section of creative practices join us to make sense of the boxes artists can be confined to, how the culture shapes these boxes, and the freedom found in exploding them. The fearlessness of these transgressive visionaries is a testament to creative integrity and its unbreakable link to independence. Presented by Netflix.
Featuring: Jeremy O. Harris (Zola), Roberta Colindrez (Vida), and Zackary Drucker (Framing Agnes)
Moderated by Alex Jung (Vulture)

THE BIG CONVERSATION
The Big Conversation tackles science, art, culture, and the movements that are fueling the imaginations of today’s independent artists. A compelling selection of speakers discuss topics centered on the themes of this year’s program and explore broader trends in art and culture around the world. In considering how artists — through their practice and their work — make meaning of the world, we’re reminded that it’s the big conversation that connects us to the big ideas.

ACOUSTIC RANGE
Saturday, January 22, 2-3:30 p.m.
Reflecting on how artists respond to what’s happening around the world, this conversation  focuses on electrifying musicians and their creative process heightening the cinematic story through music and ambience. With origins in live performance, this group has expanded their reach to composing for feature length films, animation and musicals, and will be discussing their work premiering at Sundance and beyond.
Featuring: Daniel Hart (The Green Knight), Saul Williams (Neptune Frost), and Drum & Lace (Summering)
Moderated by Dan Wilcox (KCRW)

MACHINE YEARNING
Tuesday, January 25, 2-3:30 p.m.
Cinema’s fascination with robots and machine intelligence goes back almost as far as cinema itself, even if some of film and television’s greatest characters might not pass the Turing test (though, eerily, others would). Today’s study of robotics, engineering, artificial intelligence, neural networks , etc. yields an array of fascinating applications, new technologies, and complex questions, and the artificial beings once so fanciful to Fritz Lang or Philip K. Dick now involve as much science as fiction. Supported by the Alfred P. Sloan Foundation.
Featuring: Cynthia Breazeal (Associate Director, MIT Media Lab), Lisa Joy (Westworld), Kogonada (After Yang)

HOW TO FEST: DAILY
Consider this a new part of your morning routine — a way to get your mind right and set the tone for your Festival adventures ahead. Our host, Festival director Tabitha Jackson, will bring together artists, programmers, and film lovers to explore themes that are driving the festival and the projects featured in it. Daily from January 21-25 at 10 a.m. MT on festival.sundance.org.
Presented by Acura

BEYOND FILM PRESENTS
HOW TO LIVE (After you Die)
Monday, January 24, 9-11 p.m.
Renowned for her crystalline, deeply humane reflections on spirituality, technology, and the natural world, multiple Emmy Award-winning artist Lynette Wallworth turns the lens on herself in the solo performance HOW TO LIVE (After You Die). With tenderness, intimacy, and wry humor, Wallworth recounts her coming-of-age in a radical Christian community and, by travelling through her acclaimed works, charts an artist’s journey to reclaim her voice. This presentation will be followed by a live conversation with Lynette Wallworth and moderated by Tabitha Jackson.
Performance by Lynette Wallworth

OSCAR’S COMEBACK
Monday, January 24, 11:45 a.m. to 1:45 p.m.
Director Lisa Collins and Co-Director Mark Schwartzburt have created an epic that brilliantly transports black film pioneer Oscar Micheaux into our politically polarized present. Seventeen years in the making, Oscar’s Comeback, features profoundly resonant themes and an incredible kaleidoscope of characters, including Micheaux as the godfather of independent cinema. This special showcase will include a lively conversation with the creators and a sneak peek at  scenes from the 5 hour film.
Featuring: Lisa Collins, Mark Schwartzburt (Oscar’s Comeback)
In conversation with: Jacqueline Stewart (Chief Artistic and Programming Officer, Academy Museum of Motion Pictures)

SUNDANCE COLLAB AT THE FESTIVAL
Sundance Collab is a digital destination for independent artists at all stages of their creative journeys to learn and connect. This global community is a safe and nurturing space of inclusion and belonging. Learn more at https://collab.sundance.org

SUNDANCE COLLAB ROUNDTABLE: MY SHORT FILM’S LONG JOURNEY TO SUNDANCE
Friday, January 21, 4:30-6 p.m. MT
A candid roundtable discussion with Festival filmmakers about the process of getting their short films made and seen, from conception through Sundance exhibition, and a sneak peek at their films playing at this year’s Festival. Following the conversation, we invite attendees to stay for casual networking in breakout rooms.
Featuring: Olive Nwosu (Egungun), William David Caballero (Chilly and Milly), and Sky Hopkina (Kicking the Clouds)  Moderated by Liz Nord (Director of Content, Sundance Collab)

SUNDANCE COLLAB CREATOR MEETUP: NAVIGATING YOUR FIRST MAJOR FILM FESTIVAL
Thursday, January 27, 2022, 10-11:30 a.m. MT
Creator Meetups feature candid discussions with artists and media professionals around timely and critical issues in the film and television industry, followed by breakout groups where creators can meet and continue their conversations. Join us for a discussion with Sundance filmmakers on how to prepare for, and make the most out of, your first major film festival experience.
Featuring: Kara Durrett (Producer, Honk for Jesus, Save Your Soul) and Chase Joynt (Director, Framing Agnes)
Moderated by Abiram Brizuela (Director, Sundance Artist Community)

DAILY ARTIST MEETUPS
Presented by the Sundance Collective
The Festival’s Daily Artist Meetups provide an opportunity for Festivalgoers to meet independent storytellers from the Sundance Institute artist community and beyond. Each session is preceded by a thought-provoking conversation between Sundance Artists and leads from various Institute programs.

Our Artist Spotlight series brings New Frontier artists into conversation with audiences about their provocative works and artistic practice in stimulating, informative, and engaging ways.

Online, The Spaceship’s Cinema House will host Artist Spotlight presentations by each of the New Frontier artist teams. Afterward, artists will be available to mingle and engage in conversation with audiences.

New Frontier Artist Spotlight: This is Not a Ceremony
Friday, January 21, 1 p.m.

New Frontier Artist Spotlight: On The Morning You Wake (To the End of the World)
Saturday, January 22, 7 p.m.

ADDED NEW FRONTIER PROGRAMMING
Once again, Festivalgoers who are attending The Spaceship can spend a night on earth in Amsterdam, at IDFA DocLab’s interactive playground do {not} play.  Experimental soulmates from the beginning, 2022 marks a sweet sixteen birthday for both New Frontier & IDFA DocLab.The Spaceship Filmmaker Receptions, online parties which will take place Jan 26-27, and are designed to enable filmmakers to meet their festival wide audiences.

Daily programming, panels and events from partners will also be available at: https://festival.sundance.org/village/

The Sundance Film Festival
The Sundance Film Festival has introduced global audiences to some of the most groundbreaking films of the past three decades, including Flee, CODA, Passing, Summer Of Soul (…or, When the Revolution Could Not Be Televised), Clemency, Never Rarely Sometimes Always, Zola, On The Record, Boys State, The Farewell, Honeyland, One Child Nation, The Souvenir, The Infiltrators, Sorry to Bother You, Won’t You Be My Neighbor?, Hereditary, Call Me By Your Name, Get Out, The Big Sick, Mudbound, Fruitvale Station, Whiplash, Brooklyn, Precious, The Cove, Little Miss Sunshine, An Inconvenient Truth, Napoleon Dynamite, Hedwig and the Angry Inch, Reservoir Dogs and sex, lies, and videotape.

Sundance Institute
As a champion and curator of independent stories for the stage and screen, Sundance Institute provides and preserves the space for artists in film, theatre, film composing, and digital media to create and thrive.

Founded in 1981 by Robert Redford, the Institute’s signature Labs, granting, and mentorship programs, dedicated to developing new work, take place throughout the year in the U.S. and internationally. Sundance Collab, a digital community platform, brings artists together to learn from each other and Sundance advisors and connect in a creative space, developing and sharing works in progress. The Sundance Film Festival and other public programs connect audiences and artists to ignite new ideas, discover original voices, and build a community dedicated to independent storytelling. Sundance Institute has supported such projects as Clemency, Never Rarely Sometimes Always, Zola, On The Record, Boys State, The Farewell, Honeyland, One Child Nation, The Souvenir, The Infiltrators, Sorry to Bother You, Won’t You Be My Neighbor?, Hereditary, Call Me By Your Name, Get Out, The Big Sick, Mudbound, Fruitvale Station, City So Real, Top of the Lake, Between the World & Me, Wild Goose Dreams and Fun Home. Join the Sundance Institute on Facebook, Instagram, Twitter and YouTube.