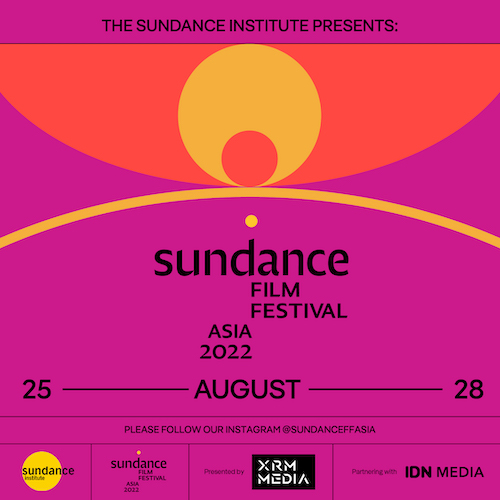 Calling for entries from Indonesian filmmakers now until 31 May, 2022

Sundance Film Festival: Asia, presented by the Sundance Institute and XRM Media is proud to announce the return of the 2022 edition of the Festival on Thursday 25th – Sunday 28th August, 2022 in Jakarta, Indonesia with support from IDN Media.

The Festival will take place in person and include film screenings and panels catered to Indonesian audiences and additional events to enhance the experience, all to be announced in the summer.

“We’re thrilled to be able to continue working with XRM Media to present the Festival in person this year in Jakarta. It is a powerful  opportunity to share new independent films we love with engaged audiences in Indonesia,” said Tabitha Jackson, Festival Director of the Sundance Film Festival.

William Utomo, Chief Operating Officer, IDN Media, states that “We are very excited to work together to create the in-person festival experience and continue to serve the best interest of movie lovers in Indonesia. We hope that the Sundance platform can continue to push the movie industry forward.”

“Beyond our Festival in January, we strive throughout the year to find more emerging filmmakers around the world working in the short film form,” said Mike Plante, Senior Programmer for Short Films. “Last year our short film competition was a fantastic success. We loved the submissions, showcased ten of them in Sundance Asia and were thrilled to have two of them in our Festival last January. Really excited to see more this year.”

To continue the support of Indonesian filmmakers, the Festival will again hold the Sundance Film Festival: Asia Short Film Competition, sponsored by Argo. Filmmakers can submit short films across any genre or theme that have been completed on or after 1 January, 2020, with a duration between 3 to 20 minutes. Submissions are now open through 31 May, 2022 to Indonesian citizens living domestically or abroad, 18 years or older.

A jury of representatives from the Sundance Institute, IDN Pictures, and Argo will curate a program of short films from among the competition submissions. The jury will also select a Jury Award winner, which will receive a $2000 USD cash prize sponsored by Argo. The jury includes:

To keep up to date on details on the Festival please follow us on: